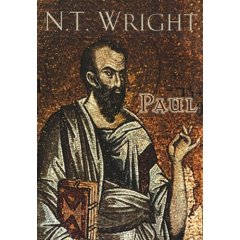 How can I rave about a book I’ve only skimmed? N.T. Wright’s brand new Paul: in Fresh Perspective arrived here at the shop by UPS around noon. I read the very moving preface and the last couple of pages this afternoon, studied the footnotes (yeah, I know, I’m weird like that) and reflected on the chapter headings. I’ve been walking around holding it most of the day and couldn’t wait to tell you about its long-awaiting arrival. For anyone serious about contemporary religious publishing, this is a very, very big day.
And, I’m thinking this is really, really just what we need: not a super scholarly 800-page tome like, uh, some of his other hefty uber-books but, rather, a thoughtful, fresh, radical yet firmly rooted study that is not too long and seems to be very acessable, standing–thanks be to God– in the best of the orthodox tradition. Some conservative theologians have been critical of Wright (he is blasted by both sides, actually, since theological liberals can’t abide his convictions about things like the historicity of the resurrection and the truthfulness of the gospel accounts.) I think, frankly, this is a good place to be, neither liberal or conservative. I talked with him about it once and it seemed like he carried that burden with maturity and grace, rather like a challange, not like a painful hardship. He truly is an amazingly calm and gracious man. Still, it must be hard to written off by the right and the left, to be misunderstood and maligned. Hopefully, this book will offer more clarity of his theories and perspectives on Paul.
Wright obviously loves his subject, and has great enthusism for intelligent Biblical study; he is concerned pastorally and as a theologian of the church and of the academic guild. He really believes this stuff can make a difference. As it says on the back cover: “The letters of the Apostle Paul changed the world like no others before or since, and they continue to strike us afresh with their panoramic vision of human history and destiny.”
Wright ranks Paul as “one of the most powerful and seminal minds of the first or any century,” enlessly engaging and perennially elusive. This new book will help to situate Paul, his relationship to Jesus, his understanding of the mission of Jesus and the nature of the first century church and help us live into the world made new by Christ.
Although N.T. Wright may be the most important Biblical scholar writing today–significant, in my opinion, for his blend of fresh and progressive insight and yet a formidble commitment to the solid tradition of historic theology–and has given us here important and mature insight into Pauline writing, he takes smaller excursions, as well. For instance, he has a bit on how a deeply Christian way of knowing is very different than the cold objectivity of modernist scientism, and yet not quite relativistic subjectivism of postmodernity, either. (One thinks of Steve Garber’s reflections at the YADA conference, and his citing of French existentialist become Catholic, Simon Weil, on the human call to learn how to know, or the brillant Nobel Prize philosopher of science, Michael Polanyi who wrote so wisely and deeply about the responsibilities of personal knowledge.) Wright reminds us that for Paul, to know is to love. Shaped by practices that were embedded in a community with that view, the first century apostolic movement changed the Roman Empire. (It is no wonder, by the way, the N.T. was a significant influence on my friends Brian Walsh & Sylvia Keesmaat, whose Colossians Remixed: Subverting the Empire, I’ve raved about often. Indeed, in one of those pesky footnotes I read today, Wright says that he is indebted to Sylvia, citing her important academic book, Paul and His Story: (Re) Interpreting the Exodus Tradition (published in England by Sheffield Books.) So, given our appreciation for Keesmaat’s work, it is nice to see her mentor and colleague citing her!
Wright will have another new book being released from another publisher in a couple of weeks, a book previously released in England on the role and authority of the Scriptures, entitled The Last Word: Beyond the Bible Wars to a New Understanding of the Authority of Scripture. We have seen an advanced copy of the rough manuscript of that (although I gave it away to a friend who is a super Wright fan) and we are very excited to get that one in, too. This new one on Paul, though, is surely one of his most important books in a while, and may be the book of the year.
We commend it to you, inviting your consideration of Wright’s brillant contributions to the on-going appropriation of New Testament insight for today.

ORDER IT FROM US ON-LINE HERE AND WE WILL SEND ALONG WITH THE Paul in Fresh Perspective BOOK A COUPON FOR 25% OFF AN ORDER FOR THE UPCOMING BOOK ON THE BIBLE, The Last Word, TO BE SHIPPED IN EARLY DECEMBER.

Thanks for supporting Hearts & Minds, for reading our BookNotes, and for your interest in important books of this kind. We hope it helps deepen your life and widen your vision. As the apostle Paul himself would write, “Grace & Peace to you all.”
Paul: In Fresh Perspective N.T. Wright (Fortress) $25.00