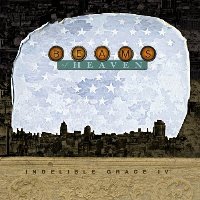 Indelible Grace IV, called Beams of Heaven, has now been released, and we have them in stock. Indelible Grace, I hope you know, is a remarkable project started a few years ago by Kevin Twit and his comrades in Reformed University Fellowship who had thought long and hard about contemporary worship, good theology, classic hymns and how to get the rich, narrative doctrinally-mature hymns better known to today’s praise & worship crowd.
Kevin is a smart guy and an excellent musician (does Berklee School of Music mean anything?) He gathered some roots-type, neo-folk singer/songwriters, mostly from Nashville, picked up some edgy guitars, some light percussion and a whole lot of acoustic stuff—sharp mandolin and lush violins–and set out to write some new tunes for some of the better old, old hymns.
After recording the underground classic, (that would be the first Indelible Grace) Kevin wrote some very thoughtful articles about their project—why postmoderns need songs about lament, need narrative, need theology, and some guidelines for picking worship music and such—and compiled very moving stories about the composers of the orginal lyrics, hymnwriters such as William Cowper orHoratius Bonar. These are all available for free at the website (click on extras to find the articles.) They have downloads of stuff,sample songs, lyrics, guitar charts, ways to make overheads, a massive songbook and all kinds of goodies at their site. We’d highly recommend checking it out.
They continued to recruit guest singers–former vocalist for Caedmon’s Call’s, Derek Webb often appears, for instance, and put out now four albums. The second was called Pilgrim Days and the third For All The Saints. The brand new one, as I’ve said, is called Beams of Heaven.
You’ve just got to hear this stuff to believe it.
After visiting their site, please come back to us to buy the albums: we’ve got all four (and Matt Smith’s and comopany’s very acoustic and very cool Christmas CD, Your King Has Come as well.) Thank God for this extraordinary project, for the ways in which many, many younger folks and campus ministry groups have resonated with their spared-down sound and rich, wordy, and substantial lyrics. We are honored to be among the first retails shops to carry it, and happy to do what we can to spread the word. May we make the suggestion that you buy a few to give a way to those who might find them helpful?
I could be wrong, but the way these recordings have had a word of mouth popularity has caused somewhat of a buzz in the CCM subculture. It has been one of the reasons–he speculates boldly–why so many cool Christian rock bands are doing hymns albums, now. Indelible Grace, though, stands in the classic tradition of re-writing contemporary tunes for the old lyrics. With a few exceptions, you understand, you will not recognize the tune. The words will sink deep into your heart and mind, though, and if you grew up hearing these songs, and don’t hear them much anymore, the words will be a solace to your soul.