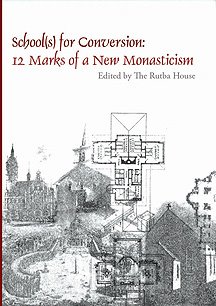 Okay, folks. I’ve blogged (and linked you to a big ‘ol rambling review I did) about Shane Claiborne’s Irresistible Revolution where he invites us to, in response to the grace of Jesus, care more for the poor, nurture the prophetic imagination, and engage in subversive stunts to expose the dead-end bankruptcy of the secular American Empire. Then I wrote about a wonderful memoir of a friend of Shane’s, Jonathan Wilson-Hartgrove, a very decent fellow who was, as he puts it, Born Again in Babylon. In that moving reflection, he tells of being a Capitol Hill page, on his way to the Naval Academy and his eventual embrace of radical faith, his journey with the Christian Peacemaker Teams (CPT) to be a peacemaking witness in Iraq, and how he and his wife helped form an urban, intentional community–a Baptist Catholic Worker–in North Carolina.
I don’t desire my book review blog here to be a site for fisty-cuffs, yet I am a bit surprised that nobody commented on these extraordinary books which make such expansive claims that we should all live like Jesus. Although I suggested, from my Reformed worldview, that the personalism and anti-institutional tone of much of this tradition is inadequate for serious and sustainable social change, I nonetheless celebrated this faithful younger generation who is trying to embody meaningful discipleship in community, standing against the idols and ideologies of our culture. When I write, as I sometimes do, about being “neither left nor right” I am mostly thinking of “third way” alternative political parties—Kuyper in Holland and his formation of distinctively Christian social institutions has been one of my influences, you know–but Shane or Jonathan would more likely take this phrase to mean standing up to protest the war-making of both the Democrats and the Republicans and rejecting power by sharing life with the powerless. With Dorothy Day, St. Francis or Mother Theresa, they might be less inclined to use the “leaven in the loaf” metaphor from Jesus as justifcation for radical witness within middle class structures, jobs, organizations and institutions, but might more likely call us to be a “city on a hill” showing the way out of exile.
So it should come as no surprise that the community which Jonathan & his wife helped start (Rutba House–learn about the reference in my previous post) gathered a gang of somewhat like minded folk to create discussion and then put out a book on what community looks like and how such communities can be agents of the counter-cultural values of God’s movement.
The very title, School(s) for Conversion speaks much—our gathering to live in community to be and do “church” is a school which trains us to be Christian. (Certainly, it can be said, that any good worshiping body does this, as we enact rituals and pay attention to liturgical practice. Where else in our culture do we hear about being peacemakers and then rehearse it—“passing the peace” most churches call it—so that we might be trained in such nonviolence? Where else do we eat a meal together—communion!—and learn of the relationship between for and grace?)
The subtitle is of course a thorny one, for me–my monthly reviews occasionally lament the ways in which churches of various stripes have disempowered lay people and kept back the vision of vocation and calling, nearly implying that the reign of God is not about the Kingdom (“creation restored”) but the institutional church. I think the Bible rejects any such dualisms and I am quick to fret about such things. So anything that seems to retreat from culture, or stand apart from it, or that suggests that praying is more important than working (as most of us rightfully or wrongfully imagine when the word “monk” is used) smacks to me of a piety that is not faithful. I don’t like the desert fathers, no matter how trendy dear Henri Nouwan made them. (They left their children for God’s sake! They deserted their homes, their businesses, their congregations! So they could find God! Talk about gnosticism! Ugh!)
Still, this gang of writers convened by Rutba House represents various kinds of experiments at relevant alternative communities and since we’ve engaged in some of this “living together in a world falling apart” ourselves, I want to take it seriously. And you know what? This is a wonderful, wonderful collection of essays, delightful, visionary, prophetic, practical and helpful. I’ll explain why in my next post.
School(s) for Conversion: 12 Marks of a New Monasticism edited by The Rutba House (Cascade Books) $22.00