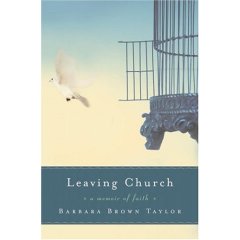 I felt privileged to have had an early draft of Leaving Church: A Memoir of Faith, which is now out in a glorious hardcover, the first one of Barbara Brown Taylor’s many good books to be issued in such a sturdy edition. She has long been known as an exquisite speaker, preacher, and writer and she is one of those few authors that I’ve said I’d read anything she wrote. I devoured her sermons, her excellent one on preaching, her book on sin, the one on science. I will buy a whole anthology, just for her chapter.
In talks I sometimes give, I carry along her first book published by Cowley, The Preaching Life, and read a few of the quotes that are so very sweet, and important. As she tells of her coming to faith, her early experiences of church, her love for nature, and her theological insights about worship, sacraments, the spirituality of the mundane, the glory of all careers and callings, I just shudder. She not only gets it really right, but says it with such wonderful prose that I put the book in my lap and shake my head.
This new book, already being reviewed in magazines and being taken seriously, is not only wonderfully, wonderfully told, but a story of huge importance; in many ways, despite the authors notable self-awareness, it is a classic form, a common story, actually. It tells, again, of her calling as an Episcopal clergyperson, her involvement in a busy, loud, urban church (a part of her life we have not heard about in previous writings) and her need to find a smaller church, a more humane pace, a calling that didn’t detract from her own spirituality.
A small northern Georgia town and her even smaller parish became her new home, and we learn not only of her ministry there, the people and place she easily learned to love, the joys and strains of worship and service, but of the ways in which her dread and burnout eventually returned. Despite finding a wonderful plot of land to steward, building a lovely country home there, her pace of life, the demands upon her in a growing church (and as the internationally- known darling of the homiletical literati), Ms Taylor found it hard to maintain health, maintain faith, maintain sanity. Some of us will know just what she means.
Leaving Church is one of the best memoirs I have read in recent years, and I could not put it down. It was written with wondrous sentences, glowing, bright, clever, often very amusing—words escape me to describe well in this brief space just how deftly told and nicely rendered this story is. Her move, finally, to become a professor of religion at a small nearby college, is documented as a crucial, life-saving, step on her journey. Even as she has recently written that “journey” imagery may preclude genuine mindfulness of each moment, this book speaks clearly that her spiritual life has been, and remains, an up and down, circuitous and open-ended journey.
I must be honest and say (gently) that, for me, and most evangelical readers—perhaps most mainline readers, too, for that matter—will find Barbara’s wholeness discovered at the expense of Biblical orthodoxy, a journey finally not given shape essentially by the Biblical language of sanctification, but of seeking, to be bittersweet. I do not need Barbara to walk the sawdust trail; I am not that sad that she has left her role as parish priest (although her movement away is described so achingly, even I—champion of the laity, quoter of her first book that celebrated ordinary jobs as holy–got a lump in my throat as I swallowed my grief for her loss.) It is, though, a matter of great sadness that she is drawn less to classic and historic Christian conviction and increasingly to the oddballs in the tradition, less to the best of the Christian way, and more to those outside the faith.
Is this classic liberalism, just silly old-school, relativism afflicting a mind that should know better? Is it a delayed adolescence—romantic, modernist, sprees of freedom and autonomy—out of which she may emerge poor of spirit but more grounded? Or is it a very, very profound move towards a mature, Christ-like spirituality, a generous orthodoxy that remains rooted in the truths of her beloved BCP even as she experiences grace in unusual ideas? Time will tell. For now, this luminous book tells of her journey, her embracing a God whose mercy is wide and whose callings upon our lives and vocations remain, finally, mysterious, hard, and healing. It may be a shame that, like the bird flying away from the cage on the eerily handsome cover art, some need to be liberated from the constraints of ministry to experience the fullness of this Divine healer, but there it is.
Any who care about healthy pastors and vibrant churches will be very interested in this journey. Those who care about our beloved Barbara, whose sermons and essays and workshops and Christian Century columns have sustained us so well for over a decade, will be glad that she is happy, hopeful that her faith sustains her towards her new-found calling as professor Taylor. Anyone, Christian or otherwise, perhaps especially the de-churched or ex-Christian, will surely find her story a blessing. Let us hope it is widely read, enjoyed, and pondered well. She has poured out her life in good and glorious sentences, and such a gift deserves our attention.