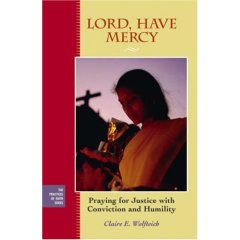 This afternoon I had the privilege of delivering a message at an annual Thanksgiving service which is designed to give thanks for the good gifts of cultural diversity; this local celebration of York County’s heritage—except for native peoples, obviously, all of us are immigrants— is a small gesture of a group of folks who have been involved for years in a ministry of advocacy for those who are seeking political asylum here. As you may know, our local prison is one of the largest holding facilities in the nation for asylees and so we have imprisoned refugees and activists fleeing repression in their homelands, literally, jailed while running for their lives. Any given day we have Africans and Chinese, South Americans and Middle Easterners, people who were freedom-seeking, pro-democracy activists and people of faith trying merely to live out their religion in a homeland of repression. I cannot even write about some of the horrific matters that these folks face, and yet, our government, more often than not, makes life very, very difficult for these imprisoned asylum-seekers. Regardless of what one thinks of illegal immigration and the complexities of that crisis, the detention of those who are seeking legal political asylum is a mess in need of reform.
And so, we started a network of pro bono lawyers, para-legals and others willing to help navigate the complicated asylum proccess, and a non-profit to try to fund the work of preventing these brave souls from getting deported to a surely awful fate. Eventually, we bought a house–we named it the International Friendship House–to give a temporary home to those who actually get legal parole or asylum. Our annual Thanksgiving service not only thanks God for the beauty and joy of diverse ethnic customs, but gives our guests a time to cook for us, to bring food and stories from their homelands. Tonight, after the service, I had some amazing food cooked by a Middle Eastern gent on the run from terrorist thugs, some Vietnamese egg rolls, African cooked chicken—I think it was Angolan—and a store-bought cake to celebrate a new job earned by a mom from Jordan who is working two jobs and raising some lovely kids with the help of a local Brethren farm family.
My message followed the features of the classic reformational worldview spelled out in Al Wolter’s Creation Regained— the flow and relationship between good creation, radical fall and wholistic redemption. I suggested that the local tastes, colors, stories, dances and songs of various cultures are there because we live in a good, matieral world, well-ordered by a creator God who invites human innovation and style, but that due to sin, pride and ideology, these cultural goods can be disfigured and no longer serve as a blessing but become a cause of alienation, exclusion, and pain (seen in racism, reverse racism, and even the horrors of “ethnic cleansing.”) Thanks be to God for grace from guilt, because through God’s redemption in Christ, reconciliation can bring restoration to the proper delight of cultural diversity. Good, but often distorted and hurtful human realities of race, language differences, and different politcal systems, can be helped and healed and turned about.
I ended with an explanation of the social context (tension between Jews and Gentiles) in the early church of Rome and preached from Paul’s call to endurance and hope for unity as he wrote into that messy, ethnically and religiously conflicted setting (Romans 15:1-7.) I am not sure our Muslim friends (or even our Unitarian partners) went all the way down the Romans road with me, but it was an honor and joy to try to preach the gospel in a contextualized way amidst a multi-cultural celebration with political refugees, asylum activists and Amnesty International folk.
And so, I ask for your prayers, as Hearts & Minds continues to serve not only book displays here and there, working conferences and setting up book displays (where we’ve come to know some of our most faithful readers) but as we attempt to stay rooted in the issues that face us here, locally. I feel like we need your prayers, facing, as all of us do, I’m sure, personal concerns of frustration, finances, stress and the like.
But, if you really want to deepen your prayer life, may I suggest a rather appropriate read given the theme of our posts this past week? Check out the latest in the Jossey Bass “Practices” series entitled Lord Have Mercy: Praying for Justice With Conviction and Humility by Claire E. Wolfteich (Jossey-Bass) $21.95. One good friend, himself a serious worker at a serious Christian think-tank that educates about and engages civic issues has himself assured me that this has been a real blessing as it has helped him to intergrate his deep passion for spiritual formation and his vocation as political thinker and writer.
There are many, many good resources on spirituality and prayer. There are many about social justice, politics and the public good. There are only just a few that do what Lord Have Mercy does in joining the two.

One thought on “Lord Have Mercy”