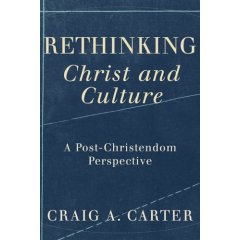 H. Richard Niebuhr’s name comes up in these posts from time to time. Indeed, in just the last post, I mentioned in passing that a book I featured at the Christian Legal Society gig, Allegretti’s The Lawyer’s Calling, appropriates his catagories of how Christians have related “Christ and Culture.” I often use some of his basic types in talks I give, showing, in simplified form, how mainline denominational folks in the 20th century had too often proposed a theology, and certainly a way of being in the world, that accodmoated a robust Christian set of principles and lifestyle to the American way of life; this, I’ve said, is rather like Niebuhr described and what I call “Christ and culture.” In mirror image, I’ve often noted, fundamentalists have done the opposite, rejecting culture altogether, seeming to be as Niehbuhr described as “Christ against culture.” In short, neither of these major wings of the church have nurtured a Biblically obedient “in the world but not of it” approach. Some are in (good) but also of (bad.) Some are not of (good) but not even in (bad.) The mainline churches have, to their credit, attempted to be relevant even if they’ve too often failed in radical holiness. Evangelicals have majored in piety and holiness, only to be, too often, culturally irrelevant. (And, before I lose you entirely, let me opine that liberal relevance, their strong suite, is, frankly, irrelevant, since it loses God’s transcendent Word; fundamentalist pietism, that which it would seem to be their best asset, isn’t even real holiness, since, Biblically, authentic holiness must be involved in the struggles of society. So we seen generations of cultural irrelevance in the liberal mainline, and pseudo-holiness in the conservative churches. But few, few, few, living out “holy worldliness” which is faithful in navigating the call to be “in/not of.”
And, so, I am convinced, and our bookstore daily ends up bumping up against, the limits and confusions, failures and foibles, of how Christian faith has related to the cultural mandate, involved itself in social issues, and how, as the H. Richard book famously put it, related “Christ and culture.” Written in 1951, much has changed (ahhh—mainline folk are finding renewal and conservatives are surely no longer anti-worldly.) And, of course, other Calvinists (especially those in the tradition of Kuyper) have written much about these very matters. Go here for just one serious and useful article that tells this story; visit *culture is not optional, whose wisdom and activism on these things is not only spectacular, but way cool.
Astute readers will know not only that I’ve greatly simplified and distorted Mr. N’s typography. And even more astute readers will know that, even to the extent that I’ve helpfully summarized some Niebuhrian types, the whole project—his view of Christ, his view of culture—is itself fraught with problems.
And so, we are eager to announce that Craig A. Carter’s new book has arrived which addresses these important concerns. Rethinking Christ and Culture: A Post-Christendom Perspective was released by our friends at Brazos, proving themselves, again, to be one of the most important publishers around. Kudos to Rodney Clapp and others there for bringing this work to us all. Carter is not the first to say this, but it may be one of the most important critiques done in the 5o-plus years since C&C become popular.
You may know Carter from his earlier, helpful overview of John Howard Yoder’s work (The Politics of the Cross) or his scholarly articles. He brings this radically Biblical, pacifist insight to bear in his reading of Christ and Culture. It looks, really, really good (and even includes charts for those who like that sort of thing!)
Blurbs on the back come from important voices (David Gushee, Jonathan R. Wilson, Mark Thiessen Nation, for instance) indicating it is an important read, and not just for Mennonites or those who read Hauerwas. As Gushee says “In his effort to determine what is wrong with Niebugh’s oft-cited typology, Carter digs deeply into two fundamental problems affecting not just Niebuhr bu the majority of Western Christians—the church’s embrace of Christendom and its unblinking support for state violence.”
I know that I myself really need to read and wrestle with these matters. I think you may, too.

If you don’t have Neihbur’s classic Christ and Culture order Carter’s book and we will sell you Neihbur’s for about 25% off. Usually, it sells for $15.95 but we will, if coupled with Rethinking… sell it for only $12.