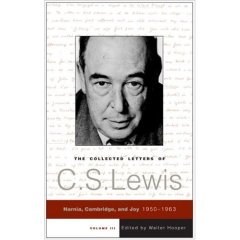 Those who read Lewis in any more than a casual way know that his letters are gems. From his kindness in corresponding to the hypochondriac woman in Letters to an American Lady to his wise counsel on prayer in Letters to Malcolm, we not only take great pleasure in older styles of correspondence, but drink deeply from the wells of his wisdom. Letters are also a good way to see in to both the biography and the character of a person. There is a reason that the letters of nearly all famous people get published.

The long-awaited final volume in the three-book set of The Collected Letters of C.S. Lewis has finally hit the stores. The sub-title tells of the importance of this volume: Narnia, Cambridge and Joy (1950-1963.) These have been expertly edited by Walter Hooper (Harper SanFransico; $42.95.) We are honored to have such a volume on our shelves (like my last post I feel a certain gravity in announcing this, as these will be enduring classics) and hope you will find it of interest. To be honest, the first two—now available in paperback in a slip-cased boxed set, by the way—were less interesting to me than this one. Here, we have his most important correspondence—stuff about Narnia, letters to Tolkein, notes to people about his most famous books. And, plenty of more ordinary writing. We have, for the first time, the complete collection of letters to Mrs. Shelburne (the “American Lady”) as well as many written to ordinary folks who had written to him. (Lewis had rheumatism in his right hand and the hours he spent writing each day was difficult, but he endured, faithfully.) The complete, charming Letters to Children is reproduced here, along with others which have not been seen by the public. These are, of course, an important source of information about Narnia as Lewis loved telling kids about the story, why he wrote them as he did and so forth.
An appendix to this hefty volume includes the early philosophical exchange between Lewis and Owen Barfield, who had become interested in Rudolf Steiner and a view that now might be called “new age.” These debates—at a time before Lewis’ conversion when he was a secular naturalist (with no hint of anything supernatural)—are particularly fascinating and may be useful for many, today.
Pieces to other literary and theological figures are here, including all fifty letters he penned to Dorothy Sayers. And, of course, Joy Davidman—letters to and about her!
Mr. Hooper’s decades of dilgent work bringing these letters together deserves a medal of honor; his work as literary advisor to the Lewis Estate is well-respected. Lewis fans, students and scholars alike will thank God for him for bringing these letters to publication.
BLOG SPECIAL
BUY ANY OF THE COLLECTED LETTERS
at 25% off
and
get a small hardback anthology of Lewis’s writings free
Collected Letters of C.S. Lewis: Family Letters (1905-1931)
Collected Letters of C.S. Lewis: Books Broadcasts, and the War (1931-1949)
Collected Letters of C.S. Lewis: Narnia, Cambridge, and Joy (1950-1963)
The first two are available in a slip-cased paperback set ($39.95) or in hardcover at $34.95 each.)
Volume three is only available in hardcover for $42.95
We will deduct 25% off any purchase and enclose a free gift hardback book.