I have long admired Gordon MacDonald, and read most of his clear-headed, balanced, passionate, thoughtful books 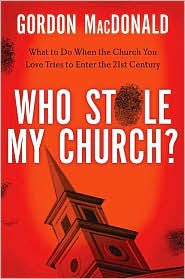 on organizing one’s life for Christian growth and solid discipleship.  He is honest, straight-forward, mature, and, although pleasant, utterly no-nonsense.  He’s forward thinking and pastoral, but what you see is what you get.  He’s not interested in hipster glitz or po-mo edginess, fads or fashions.  He’s trying to help church folk get serious, learn skills of maturity, developing into people of strong character who can withstand the hard times of real life. (His last book was on resilience and was very useful.)   He wants to make a difference for God, and he understands much about how to do that.  I enjoy and respect him.

His new book draws on years of pastoral experience and—a bit surprisingly—is written as a novel, in a clever first person narrative.  The book, Who Stole My Church? offers this on the front cover: “What to Do When the Church You Love Tries to Enter the 21st Century.”  (Nelson; $21.99.)  Although not just about church conflict, the story unfolds about a fairly typical, evangelically-minded congregation in New England (he swears it is not one he has pastored, nor are the characters based on real-life people) who have “builder” generation folk perplexed and frustrated by younger members who are making changes in the congregational ethos, spiritual sensibilities and mission of their church.  I believe, young or old, progressive or traditionalist, you will find this to be a helpful exploration of being church in our times.  I hear of church conflict around these themes—folks pushing too hard for change, folks resisting change, earnest folks trying to discern what sort of change is most appropriate—nearly every single day here in the shop.  Before I even started reading, I said right out loud: “Man, I wished I could have had this ten years ago” and proceeded to list a few friends, family members and churches who needed someone wise to walk through this stuff with them.

The title of this book, Who Stole My Church?, springs from a conversation a few years ago with a distraught man who felt betrayed by the church he had invested in for most of his adult years.  From his perspective everything had changed—overnight, he said—into something that made him feel like a stranger in the place he’d always thought of as his spiritual home.

I listened to him describe what sounded like ecclesiastical carnage. Programs had been dumped, traditional music trashed, preaching styles and topics revolutionized, symbols of reverence (appropriate clothing, crosses, communion tables, and pulpits come to mind) thrust aside.

His anguish (and his anger) began with a young pastor who had been appointed with a challenge from the church’s leadership to “stir things up with a new vision.”…

…According to my friend, most of the church members—in particularly the older generation—had no idea what they were getting themselves into when all the growth talk began.  Who would protest against, he asked, the idea of finding fresh ways to evangelize the unchurched?  But what people expected was merely a fresh voice in the pulpit and a program or two imported from more successful churches.

Here’s what I heard him saying.  What he and his fellow church members had not anticipated was a total shift in the church’s culture, a reinvention of ways to love God and serve people.  What they did no see coming was a reshuffling of the church’s priorities, so that lost and broken people rather than found and supposedly fixed people became the primary target audience.  In summary: virtually everything in the life of their church under new leadership became focused on reaching people who were not yet there.

It was during that part of the conversation that my lunch partner finally said, “Our church has been stolen out from under us.  It’s been hijacked.”  His solution to the problem?  To leave and search for another church that “appreciated” the older and better church ways his generation was familiar and comfortable with.

As I recall the conversation, my friend was less than delighted when he discovered that I wasn’t completely sympathetic to his cause.  I tried to find a kind way to say, “get used to it,” but I wasn’t very successful.

MacDonald continues on explaining the situation in many churches these days, and his concerns for all parties involved—“the dear people in the pews”— who are called by God to be agents of change for the sake of contextualized and effective ministry.  He continues, about the crafting of the book,

My first attempt at writing about church change was abortive.  I could not escape the feeling that I was writing one more dull book on an overworked subject.  So I restarted my project, but in a way I’d never tried before.  I decieded to create an imaginary New England church in which there was a small collection of average people who were bumping up against change issues and resisting them.

Once I set these people in motion, I asked myself:  If I were to enter the story as I really am, what would I say to them?  How might I engage with them and persuade them to take a fresh look at the realities in our world that do indeed require a new kind of church?

My imagined people are all in their fifties and sixties.  They are from the so-called builder and boomer generations, people who were once very much at the center of their churches and have now relinquished control and influence to others younger than they are.  Once I had them all in their proper places in my mind, it was as if they took over the story and began to tell it for me.  I just had to do the typing.

My hope for this book is that it would spark dialogue among people of all generations who love the church.  I would be grateful if the book would convince younger generations of church leaders to be more sensitive to the older generation and their thoughts.  Conversely, I have a passion that older Christians would be led—if they read this book—to understand why many things about the way we have made church work must change and reflect new realities.

To that end, there is a good study guide/group discussion resource in the back.  And, to that end, we will sell it at nearly 25% off, bringing the price down to $16.95  I’m sure some of our BookNotes fans should read this.  Others, at least, know somebody who would find it helpful.  Let’s work together and get the word out about this balanced, caring, thoughtful and contemporary parable.

13 thoughts on “Who Stole My Church?: a new book by Gordon MacDonald”