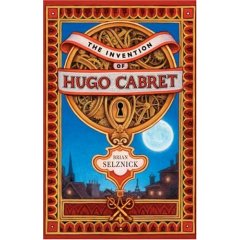 In what seems to be a bold and perhaps controversial move, a young reader’s novel—a darn good, really thick and very innovative juvenile  novel—was awarded, for the first time ever, the prestigious award for children’s book illustrations, the ALA Caldecott Honor medal.  The Invention of Hugo Cabret by Brian Selznick (Scholastic; $22.99) is a book we’ve stocked since it was released early last year, and the intricate pencil sketches are clearly a vital part of the book; they don’t just illustrate, but actually tell part of the story.  Still, book bloggers, reading teachers, and librarians all over are scratching their heads;  “Can they do that?” (Give a Caldee award for illustration to something other than a picture book.)  Of course they can, and this is a fabulously interesting choice.  We are fans of lovely children’s picture books, and usually applaud the Caldecott committee for even their more weird choices—and they’ve picked some doozies.  But this, it seems, reminds us that design and artwork and illustration are not only to be found in the picture book format.  Three cheers for the 2008 Caldecott choice, and three cheers for the Invention of Hugo Cabret which has lead to, apparently, a re-invention of the notion of the Caldecott itself.  Hugo…, by the way, has been published in 25 foreign editions, has garnered a Quill Award and was in the New York Times Best Illustrated Book list, and was a finalist of the American Book Award.  Check out the book’s website here. It is a trip!  If you still haven’t found something of this sort to read after finishing Potter last summer, try this!  It’s pure genius.

The coveted Newbery Award celebrates a book for distinguished writing, not illustration, and some wondered if Hugo… 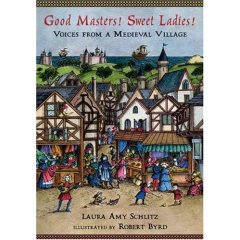 would win that, as well.  (Wouldn’t have that been something, with both awards going to the same book!)  This year’s winner caught many of us by surprise, and it, interestingly, is well illustrated (ahh, the postmodern, catagory-shifting going on!) This years winner is a colorful study of citizens of an Middle Ages English manor in the 1200s, Good Masters! Good Ladies! Voices from a Medieval Village written by Laura Amy Schlitz (published by the always top-notch, Candlewick Press; $19.99.)

Other books are named as “honor” books in both catagories and one, especially, stands out, as it is one of my favorite books of the year: The Wednesday Wars by Gary D. Schmid (Clarion; $16.)  Schmidt,

an English prof at Calvin College in Michigan, has been an author who books we’ve joyfully stocked for years—children’s Bible stories, a re-telling of Pilgrim’s Progress, and a Newberry Award honor book, Lizzie Bright and the Buckminister Boy. (A book, by the way, that our friends at Sabbath Time Ministries once fruitfully used with a clergy reading retreat.)   The Wednesday Wars is truly a must-read, a funny and very poignant telling of a year in the life of  7th grade boy in 1968.  He thinks his teacher is out to get him as she has him in a special project, learning Shakespeare.  Fabulous!

Speaking of honor books, also earning a Newberry honor is Elijah of Buxton by Christopher Paul Curtis (Scholastic; $16.99.)  Mr. Curtis was honored, also, by winning the wonderful Coretta Scott King Award.  He has won a number of Newberry and King awards and honorable mentions in past years, so you can be sure this is 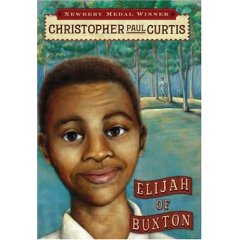