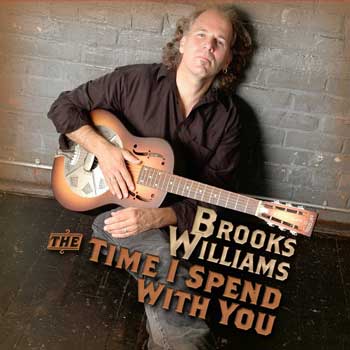 The last few days I have have been driving around a bit, making deliveries, running errands.  In fact, I’ve looked for excuses to get into the car by myself and crank this up: Brooks Williams has long been a Hearts & Minds favorite, and his spectacular guitar playing is among the best I’ve ever seen.  (I’m not kidding, and if you are a serious acoustic guitar fan, you know I’m tellin’ it like it is!  Blues Review recently called him “astonishing” and his Guitar Player album was named as one of the top 100 guitar albums ever.)

His brand new recording, The Time I Spend With You, released this week, has some great grooves, some amazing blues tunes, flat-picking and slide.  His voice is silky smooth as always–well, he growls a bit when he’s gettin’ down—and a few songs are sweet; one plays back and forth with a masterful mandolin player, giving it an old-timey bluegrass feel.  This isn’t a pop or neo-folk singer/song-writer album, nothing at all like the tender and gorgeous songwriting of his Inland Sailor, Winter Moon, Seven Sisters or Jubilee, some of his signature ballads.  Nope, this is all blues, almost all the time.  He uses mostly his beloved resonator guitar. Sometimes, he plays a groovy National Estralita, and, while I don’t know much about the luthiers and vintages, I know he has really good instruments.  And he deserves the best;  he is an amazing player.

The Time I Spent With You is the CDs name, and the title of the first track.  It reminded me a bit of an older tune of his, Dancer’s Delight, and has some great finger-picking and strong runs in between the vocals.  Other songs include more standard blues stuff or traditional tunes (Statesboro Blues, Beaumont Rag–a song he says he first learned from an old Doc Watson record.)  He revamps an earlier song of his, Rich Tonight, with even more of a jumpin’ vibe, and gives even a happy lyric a bluesy funky treatment.  He uses his acoustic slide guitar (played with a bottleneck slide) to offer his take on 61 Highway, another standard. For those who have been BW fans, you can detect the influences of one of his favorites, the old Bahamian bluesman, Joseph Spence.  And there’s some of that John Fahey/ Leo Kottke style.  This is sweetly-sung, rootsy and upbeat, not ragin’ Chicago blues or hard Delta stuff.

One of the highlights on the disc is so classy, so sweetly rendered, understated with such a Brooksy feel, that I have to mention it: You Don’t Know Me, a song recorded by many jazz singers ( famously by Ray Charles in 1962—and, for those that care, recorded by Van Morrison, a few years back.)  There are other songs (is Martha inspired somehow by the Mary & Martha story in the Bible?) There’s a lovely instrumental tune he did for his old playing pal, Scottish fiddler Johnny Cunningham (which is, amazingly, a duet with an accordian!) and an homage to Lightning Hopkins (or, well, at least a statue of Lightning Hopkins, found in Crockett Texas, where he goes to sit, and then have some bar-beee-que.)  The album closes with a romp of a song about resolve to be a different kind of man, Same Ol’ Me which is the only song where his gifted guitar work is almost overshadowed— by a blazing harmonica jam.  Wow-o-wow, this is some really cool stuff.

Believe you me.  Listen often and loud, pay attention to the playing, give thanks for this good man, and another fine, real, batch of good Americana music.  We still have a bunch of Brooks’ older new folk albums, some fantastic all instrumental discs, and his previous recording from two years ago, Ballads and Blues. We are thrilled to stock this new one, and invite you to order from us.  Check out his very cool website here.

One thought on “The first great new album of the New Year: Brooks Williams”