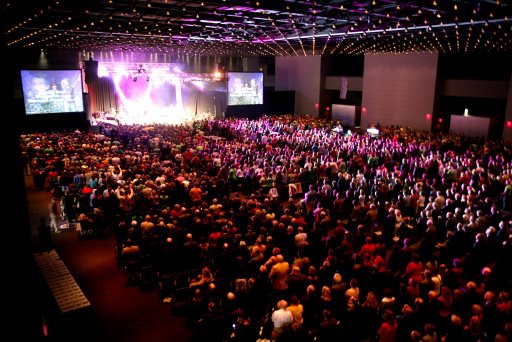 Donald Miller wandered around the stage, his shirt-tail sticking out—I still don’t quite get the generational thing about un-tucked shirt-tails— below his scruffy fleece sweater. His coupla days beard growth gave him the bohemian look I had come to expect and spoke to his style, his vibe from the edgy end of the Gen X cohort.  As he stuck the four fingers of each hand in the pockets of his cord jeans, I sensed not only his writerly persona, but something about who he was, and his perspective on authentic faith.   Thousands of us at Jubilee were captivated as he spoke about story, what makes a good story, why we seem wired to resonant with the very structure of story.  He spoke of novels and films, poetry and life; if our lives are guided by the American dream story, it will be boring and bad, pimping for money and succes.  He was very, very funny and in casual tones called us to live for something that makes sense, something important, something that we might care about, that others might notice, that God would care about.  His books (he smartly called them “narrative essays”) Blue Like Jazz (including the very cool audio CD version, which Miller reads), Searching for God Knows What, the mini-bus travelogue Through Painted Deserts and the one about growing up without a father, To Own A Dragon all sold well as he finished his hipster Jubilee mainstage talk.

Charles Colson, born again Watergate crook, the night before, stood firmly behind the podium, his black suit and silk tie speaking of his generation as he preached with his leather-bound Bible drooping over his aging hands.  A classic orator and apologist, Colson passionately called students to understand their faith, to serious-minded and enduring commitment to the ways of Christ, and to tangible ministry that shows God’s love to those who need it most.  With humble but strong voice he shared stories of his work in some of the roughest prisons on the planet, of embracing AIDS victims, of starting training programs for ex-cons and gang members, seeing God’s good news rehabilitate and renew.  I was glad to hear his call to solid doctrine and the encouragement for young Christians to know how to articulate the truth of the gospel in their often hostile settings in higher education.  His new book, The Faith: What Christians Believe, Why They Believe It and Why It Matters, last year’s tremendous paperback collection of stories and case studies of lives lived well with coherence and meaning, A Life Worth Living, and his worldview text How Now Shall We Live sold well after he finished his powerful Jubilee keynote address.

And so it went, hipster poet to old-school preacher, academic mentor to social activist, workshops on the integration of faith and learning to panels on Christianity and politics to impromptu conversations around the booths of various agencies, such as Restoring Eden, Bread for the World, Arab World Mission, Blood:Water Mission, Fuller Seminary, the Higher Education Degree program at Geneva College or *cino and countless service organizations, camps and urban outreach ministries.  Over 2000 Jubilee students “ravaged the booktable”Â (as they were told to do by Bible study leader Don Opitz in his reminder that reading, learning, asking big questions and thinking well were part of “academic discipleship”Â for faithful collegiates.) We worked the book tables like gonzo late night info-mercial miesters, doing what we do (as my friend Mark puts it): Hawk for the Kingdom. 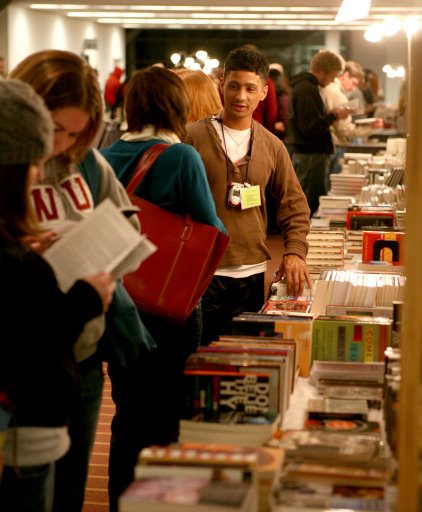 It is a delight to hawk books in such a setting as Jubilee.  Kudos to the planners and the staff of the CCO who work hard at creating a learning/growing environment where book buying is encouraged, thinking (outside of the proverbial boxes) is celebrated and hospitality is offered to all who dare to dream and imagine how best to live out our faith in times such as these. It isn’t every event we do where the book table is as promoted, where are work is as honored.

What a joy it was to hang out with speakers, to meet authors, to promote books as the writers are standing around.  We so enjoyed seeing Kelly Monroe Kullberg again, whose books, and edited volume of the spiritual journeys of thinking Christians, Finding God at Harvard and Finding God Beyond Harvard which tells of her journey raising up a Christian witness in often hostile university settings.  (Her vulnerablility and grace as she read a chapter from “Â¦Beyond Harvard about being shouted down by campus leftists during one gig, and eventually winning over her protesters was simply stunning.)  We were glad to get re-aquainted with Chad Thompson, whose book, Loving Homosexuals as Jesus Would opened conversations about grace and care, sexual ethics and such.  (We stock his DVD, by the way, which is the best thing we know of on this complicated topic.)  It is always good to be around Michael Shutt (whose book Redeeming Law is the best.) What a great thing to chat often with David Kinnaman, the new, young President of the Barna Group;  his provocative book UnChristian: What a New Generation Thinks About Christianity, and Why It Matters was one of the most talked about books of last year, and when Colson said it was a must-read, the many guests that arrived just for his talk snapped it up.  We’ve blogged about it before, and David reminded me of how important his research is, and  how exciting the story of the book really is.  Dorothy Chappell (whose edited book about various sub-disciplines within the sciences I mentioned in last week’s post) greeted us and we got caught up a bit with John Seel (who paid us immense compliments, and bought more books than most speakers!)  His Parenting Without Perfection remains one of our top books on parenting, and I recommended it to high school education majors at Jubilee.

Writers and artists who took in Greg Wolf’s workshops learned why his Image journal is so respected, and we sold some of the Square Halo collection of short pieces, Intruding upon the Timeless: Meditations on Art, Faith, and Mystery.  I hope some of the entertainers that were there–Derek Webb, Sandra McCraken, CrossMovement—got to take in some of this good stuff about Christian humanism, aesthetics, art and faith.

The panel discussion after the excellent presentation by former White House advisor and Bush speech-writer Michael Gerson (Heroic Conservatism) included authors and friends Jim Skillen and Ron Sider.  Not only did we have Ron’s newest, significant work on politics (see my monthly column in February for a larger review) but we had his brand, brand new collection of old Prism essays, published by Herald Press, called I Am Not A Social Activist: Making Jesus the Agenda.  For some who are serious about thinking through citizenship, this was immensely useful.

We sold plenty of books written by folks who weren’t at Jubilee—topics such as pop culture, the integration of faith and various majors, relationship stuff, racial reconciliation and anti-poverty resources were popular.  (We referred a number of people to our website bibliography for various careers and callings, Books By Vocation, which annotates books on a Christian perspective for various work arenas, college majors or career fields.)

Not a few customers asked for the brand new book by Timothy Keller, A Reason for God: Belief in an Age of Skepticism and the brand new N.T. Wright, Surprised By Hope. We were thrilled that the day we were leaving, the brand eager awaited book by Brehm Center scholar Barry Taylor arrived, Entertainment Theology: New-Edge Spirituality in a Digital Democracy.  We had it near the very serious new Jeremy Begbie book on music, which we foisted on anyone who would listen, ReSounding Truth.  I promoted Brian McLaren’s Everything Must Change from up front, since it seems like his call for deep change and seeing the inter-relationships of global issues is very aproppos for Jubilee.  We were happy that Tony Jones’ brand new The New Christians: Dispatches from the Emergent Frontier had just come out that week, so we had some eager to check that out.  (It is amazingly interesting, and I’ll blog about it soon.)

There is a shot of me, shown below, as I was doing one of my book promos on stage;  being a bit less manic, I was reading from Shane Claiborne’s good forward to the brand new book by Tom Sine, The New Conspirators: Creating the Future One Mustard Seed at a Time.  Shane says that one of Tom’s strengths is that he pays attention to the younger generation of believers, helping tell their stories.  In a way, I suggested, his new book is about you–the Jubilee gang.  We first heard Sine at Jubilee in the late 70s, when his first Mustard Seed book was new.  It felt very right premiering this new book at Jubilee 2008.

You won’t be surprised to know (and I hope you are as happy as we are to see young lives framed this way) that we pushed books on worldview, the formation of the Christian mind, and resources on calling, vocation, career.  You know we featured The Call by Os Guinness, and other similar books.  I said from the stage that A Journey Worth Taking by Charles Drew was much better than Purpose Driven Life and sold nearly a case.  My up-front blurb on Restoring Broken Things (Scotty Smith and Stephen Curtis Chapman) seemed to resonate as I pointed out how this broad view of the cosmic work of Christ who “makes all things new”Â includes restoration of cultures and the rebuilding of lives;  there is new hope for hurting relationships and broken hearts as there is for dysfunctional policies and broken social scenes. 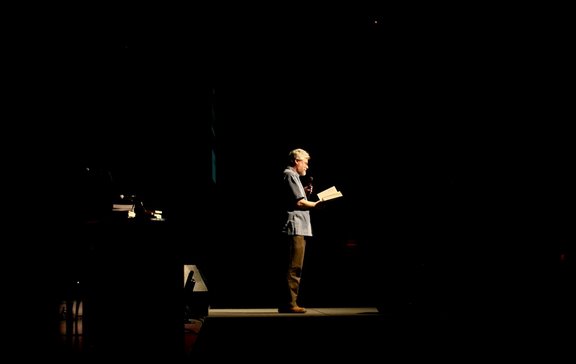 What a privilege for us to wear ourselves out talking books to the students of the CCO, to help young folks (and some older ones too) get new vision for meaningful faith, for distinctive thinking that leads to transforming visions of Christ-honoring social change. The speakers and workshop leaders, music and discussions and worship set the stage for us to offer our contribution, and we are grateful for those who purchased stuff.  Pray with us that these resources are used and lives are changed.  How exciting!  This Jubilee stuff is enough to make even Don Miller take his hands out of his pockets, enough to get Colson to loosen his tie.  I think everyone agreed, it was superlative!

PS: Thanks so very much for those who prayed for us last week, for Beth, especially, as she was relieved in the nick of time from her pretty ugly skirmish with Lyme disease baddies and heavy-hitting meds.  She was grossly sick, but miraculously  made well by God’s strong hand of rescue.