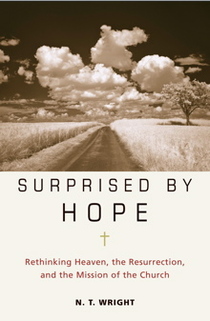 We have been to two funerals in as many weeks, sloshing around the graveside in a wintry rain with relatives, at one, and grieving with old friends from the store, today, at the loss of a young mother who we knew as a high school student.  Older or younger, death is hard, an enemy as the Bible says.  In both of the funerals we attended, the good news of the gospel and the testimonies of those who believe the Biblical witness to be true, rang out with glory amidst the sadnesses.  What do people do who don’t believe in God’s grace, eternal life, or the confidence of forgiveness?

Still, even with the most general conviction that God’s grace gives those who are in Christ a glorious future in a wonderful place, there are woefully weird views and assumptions about life, death, heaven, and such.  So much of contemporary view—within and outside of the church, among theological conservatives and liberals alike—is colored by pagan dualism, superstition, and an unbiblical set of assumptions about the body, and what happens when we die. And this, I truly believe, hinders our Christian work here, and distorts our enjoyment of daily life.

I am thrilled to announce that the eagerly anticipated new N.T. Wright book has come out (all 300+ pages!) about these very things.  Catch and ponder the title and subtitle:  Surprised by Hope: Rethinking Heaven, the Resurrection, and the Mission of the Church  (HarperOne; $24.95.)   A year from now, I am confident many of us will be listing it as one of the most significant books of 2008.  I have had an advanced copy for several months, and I’ve been savoring bits and pieces—-I really am so confident that this stuff is very, very important.  It should be understood that here are certain urgent social and cultural implications of the notion that God is redeeming this creation, that (as Paul Marshall so provocatively and properly puts it in his book by this title) “heaven is not my home.”  If our bodies are good, and the Easter resurrection of Jesus is a foretaste of the physicality of eternity, then there is perhaps considerably more continuity between this world and the next than is commonly assumed.

With deft historical and Biblical study, Wright here makes the case for the Kingdom of God being that which restores (not destroys) creation.  As other important authors in our day have argued (think, of course, of the Hearts & Minds fondness for Al Wolters’ Creation Regained or Michael Wittmer’s Heaven Is A Place on Earth or Randy Alcorn’s Heaven) we are not destined for an ethereal existence in some heavenly place beyond creation and history.  Jesus promises that where He is, there we will be.  And, of course, He is coming back to Earth (read the final climax of the grand Biblical story in Revelation 21 and 22!) The good but fallen garden has been transformed into a city of God, a place where the very leaves of the trees are for the healing of the nations.

If we are, with Tom Wright’s very expert help, to rethink our assumptions and attitudes about life and death, and life after death, then we will be forced to face a new framework for thinking about what matters most in this life, and the very mission of God.  And, a hopeful mission it is!  As William Willimon says on the back jacket blurb “This is, quite simply, the best book we have on the substance of Christian hope.”    Richard Foster “heartily commends” it.  Rob Bell says it dismantles “the tired old theologies of escapism and evacuation to help a whole generation of us more clearly grasp the Jesus revolution, for here, now, today.”  Dallas Willard says it recovers “the original, radical understanding of resurrection, salvation, and the Good News of life now in the Kingdom of God.”