We just got back from selling books at Palmer Theological Seminary in Philadelphia.Â  We were at the conference 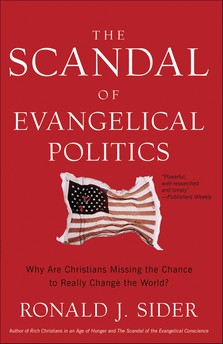 organized by Evangelicals for Social Action, a gathering convened to study themes raised by Ron Sider’s new book, The Scandal of Evangelical Politics (Baker; $15.99.) I reviewed this book in our monthly website column in February and I hope you saw it; it is very, very important.Â  One of the opening speakers at the conference was Dr. David Gushee, whose excellent new book, The Future of Faith in American Politics: The Public Witness of the Evangelical Center (Baylor University Press $24.94) makes a very strong case for what he calls a “centrist”Â evangelical witness. Gushee has been a friend and colleague of Sider and ESA for years and it was fabulous to be with him, again; the book is very good, and he has been in high-level conversations with evangelical leaders around these themes and has an insightful grasp of the movements, inclinations and future of the faith and politics debates.Â  Like these books by Sider and Gushee, the conference advanced the notion that although a “third way”Â and radically centrist alternative to the Christian right has been being researched and written about for years, the recent demise of the fundamentalist right really has created a new opportunity for responsible, Biblically-balanced perspectives to become better known.Â  Scholar/activists like Stanley Carlson-Thies and John DiIllo (both who have served in the White House in the Office of Faith-Based and Community Initiatives) and serious political science scholar Jim Skillen (of the Center for Public Justice) were presenters, and both Sider and Gushee tipped their hat to the solid work Skillen has done for many, many years in helping us “think Christianly”Â about politics, citizenship and statecraft.

Â Also, there were strong voices from outside the mainstream, white evangelical culture—ethnic minority leaders like the vibrant and forthright Louis Cortes (Esperanza) and Al Tizon (a young, Asian-American Prof. at Palmer who I was tickled to finally meet) and racial diversity trainer, author (and Hearts & Minds booster) Brenda Salter-McNeil.Â  Buster Soares preached up a storm in classic African American style on Sunday morning—showing how Jeremiah Wright could be best understood after spending time with Jeremiah the prophet, who, naturally, leads us to Jesus and his radical reorientation announced in Luke 4.Â  I’ve not been so challenged and moved by a sermon in years!Â  Testify, indeed!

Â There were workshops on how to advance a consistently pro-life ethic in the public square, ways to help conservatives and liberals work together, especially on matters of common concern like religious liberty and overcoming poverty, and good stuff on creation-care.Â  It was a working conference, with panels and workshops and non-stop conversations.Â  We met some new folks, got re-connected with long-standing H&M customers, and hopefully added value to the event by offering resources, book-buying advise, and a general reminder that to make a difference as thoughtful Christians in the public square we simply have to read, study, learn, and reflect.Â  Selling books at events like the ESA conference is a large part of our calling, it seems, and we are glad to be able to tell you about it.

The “Scandal”Â event didn’t attract a huge crowd, but it generated the same hope and zeal that we are hearing about from the current Jim Wallis/Sojourners book tour (The Great Awakening: Reviving Faith & Politics in a Post-Religious Right America)Â and the radical commitments to find real answers to societal crises such as thoseexplored by Brian McLaren in his stunning Deepshift/Everything Must Change tour, based on his book, Everything Must Change: Jesus, The Global Crises and a Revolution of Hope.Â  We sold some copies of Jesus for President by Shane Claiborne, of course, and, he, too, is soon to go out on a conference/book tour (although nobody else’s will have juggling, “Amish for Homeland Security” tee shirts, or a service component the way Shane’s surely will.)

These are good times to be courageous “third way-ers”, to be something other than the secular left or the Christian right.Â  Why even conservative blogger extraordinaire, Joe Carter, over at The Evangelical Outpost has issued an open letter to his colleagues on the Christian right, advising more balance and less right-wing venom.Â  Hat tip to Dick Cleary at Viewpoint for linking us with that.

If you’ve never read Ron Sider’s Rich Christians in an Age of Hunger, you really should.Â  Christianity Today listed it as one of the top 100 books of the 20th century, and we have re-read every edition since its much-heralded 1976 release.Â  What he did for global poverty in that book, he did for domestic poverty in Just Generosity: A New Vision for Overcoming Poverty in America; it was given great forwards by Catholic Democrat John DiIllio and evangelical Republican, Chuck Colson.Â  That in itself says something, eh?

Sider’s latest, The Scandal of Evangelical Politics, may be his most thoughtful and sophisticated yet, a systematic call to a conscientious and consistent Christian public philosophy–rooted in the Biblical story and a subsequent Christian worldview—coupled with non-partisan, interdisciplinary social analysis.Â  I know we’ve been saying this kind of “framework & foundations” stuff for years, so it is great to have an eminent Christian leader like Sider insist not only that we take the Bible seriously,(as he has prophetically called us to on issues of war, violence, poverty, materialism, creation-care, sexual ethics and such) but to develop a distinctively Christian set of theories about the state, about society, about the norms which should guide the unfolding of institutions, who should do what, and so forth.Â  We need more than rhetoric—even more than calling for Jesus to be President—and Sider delivers in this great new book. 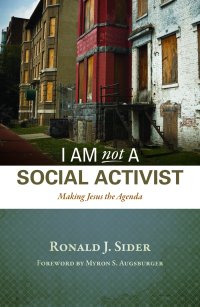 You may not know of his brand new I Am Not A Social Activist: Making Jesus the Agenda (Herald Press; $16.99) This is a collection of his short pieces from Prism magazine.Â  I have cried at some of these, photocopied many, saved them for future use.Â  I know I am not the only one to read Sider’s back-page column first in Prism, and it is fabulous to have them in one convenient volume.Â  Here you have Sider calling for a wholistic vision, for integrating faith and life, for doing evangelism and social action, for uniting prayer and politics.Â  Here is his piece on Paul Marshal’s Heaven Is Not My Home, and here are several of his best columns on the nature of the Kingdom of God. Several are quite tender, all notably full of piety and faith. From love of creation, to love of his beloved wife, from his rage against the Bush tax cuts to his proposals for evangelicals to get involved in the global warming debate, these are some of the best short polemics you will find.Â  If you care about the world in which we live, and want some guidance in offering a balanced, Biblical view to the issues of the day, pick it up and start on any page. It will draw you closer to Christ. It will give you something clear and important to talk about with those who don’t quite do this kind of reading.Â  It will help you help our sad, needy, world. Â  And that is something to which we are all called.

One thought on “Scandal of Evangelical Politics”