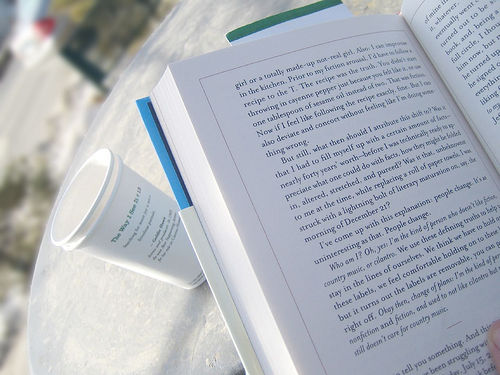 One or two folks said they enjoyed my random little fun list from the last post, naming some titles I’m just enjoying—not the heavy and incredibly important stuff that I’ve mentioned recently, urgent and wise work like Brian Walsh & Steven Bouma-Prediger’s Beyond Homelessness, say, or the new Gary Haugen, Just Courage or Who Gets to Narrate the World by Robert Webber.  You know from former posts how seriously I believe we need to be reading these kinds of books.  It doesn’t take much to encourage me to digress, though, so here are a few more miscellaneous suggestions that came to mind, books that are around our bedside, beside the couch, on the picnic table, even though it is too hot to read until late at night when I take a lamp out just to read outdoors.

I hope you’ve heard of Rapture Ready! Adventures in the Parallel Universe of Christian Pop Culture (St. Martin’s; $25.00.) Daniel Radosh is a “secular liberal” who writes for GQ and The New Yorker and suchlike, who enters the conservative Christian subculture and writes well about it in ways that are unpredictable, funny and fun.  Some of it is very well-rendered, much of it spot on, and occasionally is surprisingly moving.  Even when he doesn’t get it fully right, it is a good glimpse into the lives of many Americans, many of us, and is a joy-ride of a good story.  As A.J. Jacobs (author of The Know It All and the fabulous The Year of Living Biblically) puts it, “Everyone should read this book–with the possible exception of Stephen Baldwin [see page 143.]”  It would be perfect if you loved, as we did, the “outsiders” exploration of Christian rock,  Body Piercing Saved My Life: by Andrew Beaujon.  Great book! 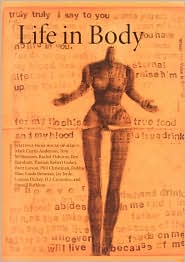 One lesser known book which we are very proud to offer is Life in Body  put out by the House of Mercy (Cathedral Hill Press; $15.00.)  I hope you know the extraordinary voice–literally and writerly–of hipster emergent pastor Debbie Blue.  She sounds like Anne Lamott, but more so, and has a poet’s sensibility, even in her spoken word delivery. (Here is a brilliant, brillant talk she gave at Houghton College on flesh.) The wildly creative faith community House of Mercy–which I first heard of at the very end of one of my all time favorite memoirs, The Jesus Sound Explosion by Mark Curtis Anderson (University of Georgia Press; $29.95)—has a little artsy publishing venture (along with a rockabilly recording studio.  Go figure.)  You may know of Russell Rathburn, who wrote the much-discussed, incredibly weird apocalyptic, comedic tragic novel Post Rapture Radio: Lost Writings From the Failed Revolution (Jossey Bass; $12.95.)  He’s a pastor there, if it helps you get the picture.

Ms Blue’s stunning Sensual Orthodoxy (Cathedral Hill; $13.95) was her first book and it is insightful and beautiful and important, about embodiment, creation, humanness, goodness and such.  (A very literate and kind UCC pastor friend told me about her, having heard her read at the Calvin Festival of Faith and Writing, and opined that evangelicalism is in fine hands if she is any indication of the up and coming leaders and writers.)  Brazos Press published her next eloquent and provocative one, From Stone to Living Word: Letting the Bible Live Again ($16.99) which should be getting much more attention.  Life in Body seems to have her imprint upon it, although only one chapter is her own;  this is a marvelous collection of essays, memoir, Bible study and poetry, all around the theme of body image, the journey of our human experiences from birth to death.  Ragged and lovely, scary and moving, this is a “lit mag” kind of collection, hardly known, and exceptionally rewarding.  My daughter once gave me a collection of essays of writers from Minnesota and I was surprised at how good these common folk were, this odd admixture of upper mid-West rural populism, creativity and localism.  Upper mid-west writers rock and this book is a witness.

I’ve been taken with the look and feel of the paperback memoir Virgin Time: In Search of the Contemplative Life by Patrician Hempl (North Point Press; $14.00) who is another writer from St. Paul, and have had it in my room for over a year, I think.  I read the first page this week and was instantly hooked, just thrilled by the giftedness of the writing. Wow.  I don’t expect it to be as full of whimsy and pluck as Eat, Pray, Love but it surely is going to be a journey worth taking.

I actually haven’t finished Animal Vegetable Miracle: A Year of Food Life yet, and I hope to pick that back up;  the paperback has a nice textured cover and a good interview with Barbara Kingsolver.  I’ve been saying I’m going to read her early novel Animal Dreams this summer, and I hope I can get to it.  Do you know her earliest fiction, before Poisonwood Bible?  I think Bean Trees and Pigs in Heaven are among our all time favs–tremendously enjoyable.  I was glad to see Brian and Steve (in Beyond Homelessness) cite her essays from Small Wonders too.  It was our old pal and former worker Gordon Carpenter who first turned us on to her;  he and his fam lived near Tucson AZ so naturally became fans. Her first non-fiction collection was High Tide at Tucson and that, too, makes for great summer reading, enjoyable, smart and inspiring.

Want a fun book to have around to dip into whenever you’re between novels or wanting to remind yourself (or others) about the power of fiction and creative writing?   Dale Brown has gifted us all with another fabulous collection of interviews (as he did years ago with Of Fiction and Faith) called Conversations with American Writers: The Doubt, the Faith, the In-Between (Eerdmans) $18.00.  It isn’t the kind of book that chain Christian bookstores are likely to promote;  it probably is not seen as essential reading in theological bookstores, either (although we echo Eugene Peterson’s oft-quoted comments about the importance of preachers reading fiction.)  Yet, this is remarkable, and we hope you can tell folks about it!  Here are conversations with David James Duncan, Ernest Gaines, Ron Hansen, Lee Smith, Jan Karon and others.  These are writers whose work wrestle with the sacred and Brown has listened well, reporting from this community of thoughtful storytellers who (whether they identify themselves as Christians or not) raise important questions about meaning, doubt and how art can sustain faith, even in unexpected ways.  Kudos to Dale Brown, former director of the famed Calvin Festival and now head of the Buechner Institute at Kin
g College in TN.

Speaking of Frederick Buechner, I suspect you know his three clever little books of short pieces, Peculiar Treasures: A Biblical Who’s Who, Wishful Thinkers: A Seeker’s ABC, and Whistling in the Dark: A Doubter’s Dictionary have been combined, a few new entries added (to make 365), and released in a chunky one-a-day one volume book called Beyond Words: Daily Readings in the ABC’s of Faith (Harper; $20.95.) I grabbed one from the shop last week and thought I’d start reading it a bit each day (I admit I’ve never read through all three, fully.)  Getting in a Buechner mindset will be helpful as we just got the brand new 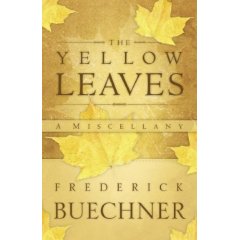 release The Yellow Leaves: A Miscellany (Westminster/John Knox; $17.95.) You may recall, or have heard (I wouldn’t have know!) that the line is taken from a Shakespeare sonnet, #73.  The book is a rare collection, various “leaves” left–fiction pieces, remixes and previously unreleased bits, a little memoir and some essay.  A must have for fans, and a nice intro for browsing if one is only a bit aware of his varied stylings.

I haven’t started it, except for the afterward that starts out riffing on the popularity of “Bad to the Bone” by George Thorogood (which was even used in the Sponge Bob movie), but I’ve been eyeing up the latest collection of essays by one of the most literate guys on the planet, Alan Jacobs.  His latest is called Original Sin: A Cultural History (HarperOne; $24.95.)   It has garnered rave reviews from the likes of Buechner;  you have to love a Wheaton College prof who gets this said about his work  (by Alan Wolfe of Boston College): “I do not believe in original sin. I do believe in Alan Jacobs.  He is one of the smartest and wittiest writers around on matters involving religion and Original Sin is a gem”

4 thoughts on “More Reading for the fun of it…”