Every so often we meet people who lead us outside of our comfort zone, or remind us of older commitments.  Although Hearts & Minds prides itself in a diverse and interesting selection of books on global missions, and cross-cultural relationships, it is easy to lose passion for these large, important concerns.  It has been a while since I read a mission biography or spent time in tears praying for the persecuted church. So it was with great joy that we had the privilege of selling books at a lecture and author appearance by the Chinese underground church leader known as The Heavenly Man, Brother Yun.  He acquired his nick-name when he refused to offer his given name to the communist authorities, knowing that if he told of his home village, others there would be endangered.  Such fidelity earned him persecution, repression and torture, and the claim that he was “from heaven.”

Through a Chinese-loving, cross-cultural Finnish translator—more a brother and ministry partner than a mere translator— we heard and felt the message of God’s faithfulness during persecution, the need for boldness in outreach and obedience, and the possibilities of miracles, as the house church movement so often sees.  When Brother Yun would start to sing (sometimes with hymn tunes Westerners would recognize) with rich and throaty Chinese whisps of sound, it was truly trans-cultural and very moving.  Knowing this brave soul had suffered so, yet could still burst into joyous passion for Jesus, was haunting;  what power as he invited us to serve as “good Samaritans” giving the presentation a serious sort of integrity. 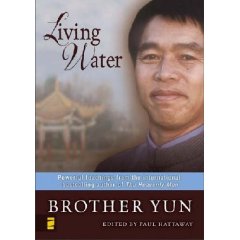 As the books were signed—-in long stripes of beautiful Chinese characters—and Yun said “hallelujah” to each customer, Beth and I commented that this was an author signing unlike any we’ve done.  And it reminded us of our past involvements with Chinese dissidents and asylum seekers, of God’s heart for global missions, and for how the Christian church and world is changing in our lifetime.  As you may know, the millions of believers in China (not to mention other places on other continents) are spilling out into mission, especially in the conflicted areas of the  Central Asia, the subcontinent and into the Middle East (what missiologists called the 10/40 window.)  This mission outreach from China towards the West they call the “Back to Jerusalem” movement.  It was striking to hear Brother Yun call us to care about Muslims, Hindus, Buddhists and communists.  As he shared his meager food in prison with atheistic murderers on death row, so we all must, in Christ-likeness, give our lives away.

Brother Yun has two books.  The first, about his harrowing and remarkable life is called The Heavenly Man (Kregal; $16.99) and the newer one is a collection of his devotional and spiritual insights called Living Water (Zondervan; $15.99.)

We have some of his books left, and are pleased to offer a special deal for those who might enjoy a good mission read, a glimpse into the persecuted church, or a vibrant reminder of what it means to trust God as we know Christ’s suffering and joy.  Here’s the deal: buy both and get ’em for $20.  That is a large savings, and a lovely set of inspirational stories.

For those interested in other ways the gospel is being discussed in China, consider this rare find, a book which reports about (even with wonderful photos) and offers the transcripts of an ongoing debate held in China A Friendly Dialogue Between an Atheist and a Christian by Luis Palau & the renowned diplomat, Zhao Qizheng (Zondervan; $14.99.)

One of the very best overviews of Christianity in China is called Jesus in Beijing by the estimable journalist, former Beijing Bureau Chief for Time magazine, David Aikman (Regnery; $16.95.)  The subtitle is How Christianity is Transforming China and Changing the Global Balance of Power.

You probably know the important watershed work about the global expansion of faith done by Philip Jenkins, The Next Christendom (Oxford; $14.95).  He is a dear man and an important scholar.  A more slim and very inspiring book on 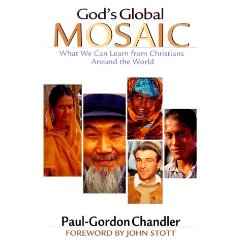 the same topic is one of our favorites, God’s Global Mosaic: What We Can Learn from Christians Around the World by Paul-Gordon Chandler (IVP; $15.)  This tells in moving prose how Christians from each continent have something in their own faith journey that they have particularly learned, hard-won insights that we in the often cozy West should learn.  With a forward by John Stott, this is a generous and upbeat book, even if full of the gravity and pain of Christlikeness that comes from great suffering.  Our experience meeting Brother Yun reminded us of the great ethnic and racial and cultural diversity that we will someday experience in the new creation.  Why not start now, at least by reading up a bit?  You won’t, for eternity, regret it.

One thought on “Brother Yun, The Heavenly Man”