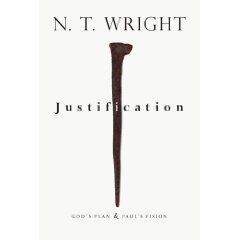 Christ.  We recommended a few books of varying viewpoints and of different tones.  This, of course, is dear to the heart of the redeemed, and it is good to often revisit the core claims of the gospel.  Justification by faith is surely one of these topics about which we can always learn more, always find new ways to describe, and deeper reasons for praise, adoration and faithful response.

We noted that N.T. Wright’s book on justification, Justification: God’s Plan and Paul’s Vision (IVP; $25) has been long awaited by many of us, and particularly so after the hefty critique offered by John Piper in his book 2008 The Future of Justification (Crossway.)  We offered to take pre-orders at a 25% discount.  Now, the wait is over: the new N.T. Wright volume is here, and it will surely be one of the most talked about theological books of the year.  It is rigorous and thoughtful, of course, but not only for the academic or theologically mature.  This is a book for us all, serious, in-depth, but accessible.  I am sure you will be reading about it, hearing about it, and, hopefully, will be able to form an opinion yourself.  It is, in our opinion, one of those books that is worth owning and working on.

Here are some blurbs that adorn that back.  I love ’em, and enjoy knowing that it is commended by such an august crew.  Books that create this sort of buzz, that are seen as this significant, don’t come around that often.  We are pleased to offer it to you.

“For some time now, I
have watched in puzzlement as some critics, imagining themselves as
defenders of Paul’s gospel, have derided Tom Wright as a dangerous
betrayer of the Christian faith. In fact, Paul’s gospel of God’s
reconciling, world-transforming grace has no more ardent and eloquent
exponent in our time than Tom Wright. If his detractors read this book
carefully, they will find themselves engaged in close exegesis of
Paul’s letters, and they will be challenged to join Wright in grappling
with the deepest logic of Paul’s message. Beyond slogans and
caricatures of ‘Lutheran readings’ and ‘the New Perspective,’ the task
we all face is to interpret these difficult, theologically generative
letters afresh for our time. Wright’s sweeping, incisive sketch of
Paul’s thought, set forward in this book, will help us all in that
task.”

“Tom
Wright has out-Reformed America’s newest religious zealots–the
neo-Reformed–by taking them back to Scripture and to its meaning in
its historical context. Wright reveals that the neo-Reformed are more
committed to tradition than to the sacred text. This irony is palpable
on every page of this judicious, hard-hitting, respectful study.”

“Like
Paul himself writing to the Galatians, in this book Bishop Tom expounds
and defends his interpretation of the apostle’s teaching on
justification with passion and power. At the same time, he seeks to
move beyond divisive categories (old perspective versus new;
soteriology versus ecclesiology; justification versus participation) so
that Paul can speak from within his own context and thereby to us in
ours. The result is an extraordinary synthesis of the apostle’s–and
the Bishop’s–views that should be read by the sympathetic, the
suspicious and everyone else.”

“N.
T. Wright provides yet again another fresh and exciting exposition of
the apostle Paul. Here Wright shows how Paul proclaimed justification
by faith as part of the Bible’s theodramatic story of salvation, a
story that stretches from creation to Abraham to Israel and all the way
through to Jesus the Messiah. Wright responds to many criticisms
including those of John Piper, and regardless of whether one gravitates
toward Wright’s or Piper’s unpacking of Paul, you cannot help but enjoy
the sparks that fly when these two great modern pastor-scholars cross
swords over the apostle. Moreover, Wright artfully brings readers into
the narrative world of Paul, and he sets before us a stirring portrait
of the apostle to the Gentiles and his gospel.”

“Frank theological table talk is sometimes a necessary endeavor. Tom Wright’s Justification
is his substantive reply to critical work by many, including John
Piper, on the New Perspective. Wright correctly reminds us that this
approach should be better called New or Fresh Perspectives. The goal is
to open up the text concerning what it originally said in the first
century, not change it. This book sets up a meaningful and significant
conversation between the camps in this debate through its direct
interaction with the critique. It should be read and reflected on, just
as work on the other side should be. So I recommend this book and say,
pull up a chair to the table and pay careful attention to the
conversation. In the dialogue, all of us will learn more about what
Paul and Scripture say about justification (and a few other things as
well).”

“John
Piper, it turns out, has done us all a wonderful favor. In writing the
critique that invited this response, he has given Bishop Wright the
opportunity to clearly, directly, passionately and concisely summarize
many of the key themes of his still-in-process yet already historic
scholarly and pastoral project. Wright shows–convincingly–how the
comprehensive view of Paul, Romans, justification, Jesus, and the
Christian life and mission that he has
helped articulate embraces ‘both the truths the Reformers were eager to
set forth and also the truths which, in their eagerness, they
sidelined.’ Eavesdropping on this conversation will help readers who
are new to Wright get into the main themes of his work and the
important conversation of which it is a part. And it will give Wright’s
critics a clearer sense than ever of what they are rejecting when they
cling to their cherished old wineskins of conventional thought.”

“This
is a sharply polemical book, and N. T. Wright occasionally rises to
Pauline heights of exasperation at his opponents. At bottom, though, it
is about Pauline basics–about Abraham and Israel, eschatology and
covenant, courtroom and Christology. With debates about perspectives
old and new swirling around him like a cyclone, Wright does what he
always does–he leads us carefully through the text. Some will
doubtless remain skeptical about the Copernican revolution Wright
proposes, but we are all indebted to him for reminding us once again of
the breadth of the gospel of God and the majesty of the God of the
gospel.”

–Peter Leithart, author of Solomon Among the Postmoderns

“This
sprightly and gracious yet robust work is Tom Wright’s carefully argued
and scripturally based response to those who think that he has deeply
misunderstood Paul’s doctrine of justification. Although it is intended
especially for those familiar with the debate between the various
scholarly perspectives on Paul, it is in fact a straightforward and
reasonably succinct exposition of Tom’s interpretation that
incorporates a defense of his approach to Paul in general and his
exegesis of specific passages in Galatians and Romans in particular.
This is definitely one of the most exciting and significant books that
I have read this year. Like all of the author’s work, I found it hard
to set down once I had started to read it. Strongly commended!”

Here is a good interview with Wright.  Reading it, you’ll surely want to get the book.

2 thoughts on “Justification by N.T. Wright now on sale here”