As is often the case, I’m not quite ready for the Fall to begin.  For one thing, there are too many books still on my “want to read soon” stack, and a few lovely titles that just seem right for summer.  Oh well.  This really has been a rich reading season for Beth and I—that isn’t always the case as sometimes we are just too busy handling the books to actually read much.  So, we’re happy about the lists we’ve made, and the titles we’ve loved.   Here are 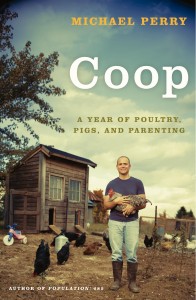 Coop: A Year of Poultry, Pigs and Parenting Michael Perry (Harper) $25.99  I’ve noted this before and both Beth and I name this as our number one book of the summer.  Perry is a decent, decent chap, a funny and thoughtful guy, and a heckuva good writer. We love his work.  Some of his sentences just made me smile, others had an impact that I can hardly explain.  Here he is, again, in the middle of rural Wisconsin, recalling his religious upbringing, his farming family, and he narrates a season where he and his new wife do a home birth, raise some pigs, build a chicken coop, mourn the death of relatives child, struggle with the balance of his writing life and their rural life, trying to be good neighbors, good to each other, and actually get some stuff done.  This is one of my all time favorite books, and it is intelligent, wise, very well crafted, and deeply caring.  Highly recommended.  Then get his others, Population 485: Meeting Your Neighbors One Siren at a Time,  Off Main Street, and Truck: A Love Story. 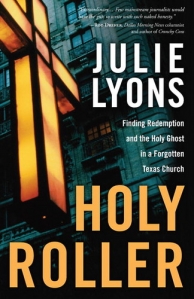 Holy Roller: Finding Redemption and the Holy Ghost in a Forgotten Texas Church Julie Lyons (Waterbrook) $18.99  This is the story of a white reporter who enters the world of inner city, Black Pentecostalism, where she is mentored by a self-taught holiness pastor and his wife, even as she reports on their healing ministry among crack addicts.  From learning about deliverance from demons, to learning about racism and urban struggles, Lyons and her husband and young child take to the church, and, twenty-plus years later, are still members, the only whites in the African American storefront congregation.  Ms Lyons—a fairly conservative evangelical, now Holiness Pentecostal, who herself has a bit of a backstory of her own sadnesses—writes a blog for her newspaper, the Dallas Observer, that is owned by The Village Voice;  her pro-life stance and calls for traditional sexual ethics are not popular amongst the liberal gay-friendly readership, but the Voice, to their credit, keeps her on. (Talk about diversity!)  So, this woman from a pretty strict, all-white, up-tight, up-bringing, now is getting death threats from her newspaper readership, working the crime beat in what in the 90s was one of the most dangerous neighborhoods in America, and learning to be a spirit-led Christian among these elder brothers and sisters in a run-down Dallas church where poor blacks come, expecting miracles amidst drugs, sexual violence, gangs and all the rest.

It is hard to tell you how thrilling this book was, and how it oddly kept both Beth and I up nights, reading to see what crazy episode would crack open next.  For those who have any interest in charismatic renewal, urban problems, the historic black church, racial reconciliation, or a just rip-roaring spiritual memoir, this is a fine read.  As Rod Dreher, of the Dallas Morning News says, “Extraordinary…Few mainstream journalists would have the guts to write with such naked honesty.”  For a fabulous interview with the author, go here. 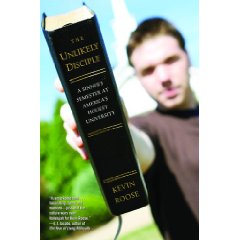 The Unlikely Disciple: A Sinner’s Semester at America’s Holiest University  Kevin Roose (Grand Central) $24.99  I think it was my friend Derek Melleby who convinced me that this was really very important, a fabulous inside look at evangelical students, at college life, and at how American fundamentalism is seen by an outsider.  A very talented young journalist from Brown University takes on, as it says on the back, a “cross-cultural journey of Biblical proportions.”  Roose is a fun,  writer—he was an intern with the talented and hilarious A. J. Jacobs, who helped him cook up this crazy idea of going undercover to pretend he was a fundy student at Falwell’s Liberty U. Of course, Roose doesn’t quite know enough to know how to do that, (like, for instance, that he wasn’t supposed to cuss, and he ought to know how to locate and pronounce the books of the Bible–duh.) Those of us who have spent time in the evangelical sub-culture will cringe and laugh and cry at his awkward situations. (And those who wonder what a men’s dorm is like, well, you get that, too, vividly.) Yet, Mr. Roose is open-minded, and like any good undercover anthropologist, learns to love his subjects.  And what subjects they are!  Rob Bell says of it, “This is a brilliant book. Absolutely brilliant. Roose’s wisdom, humanity, and love kept me going.  And I laughed.  A lot.”  Yep.  I don’t care if you like Falwell or don’t like Falwell, if you are interested in American colleges or care about the evangelical sub-culture, this is a great story, well written, interesting and humane.  Enjoy.

Plenty: One Man, One Woman, and a Raucous Year of Eating Locally  Alisa Smith & J.B. 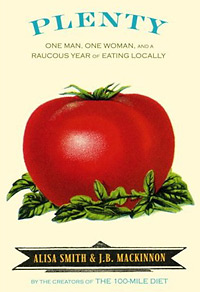 Mackinnon  (Harmony) $13.95  All right, I’ll say it right out: I liked this better than another book I said I liked last summer, Animals, Vegetables, Miracles by the esteemed and vital Barbara Kingsolver.  Yes, Kingsolver is a master of luscious sentences, and her story of their year of farming was very nicely done.  But this!  This was fun, really interesting, and significantly engaged me as this young couple promise to live on what they’ve dubbed “the 100 mile diet.”  That is, to keep from wasting energy and fuel by shipping food all over the planet–a wasteful and unsustainable habit that they don’t spend too much time describing—they intend to eat only stuff grown within 100 miles of their Vancouver home.  They are both journalists, so they’ve got the reporting thing down, and as young writers, they’ve got a spunky style that is appealing and clever. Some of their pages are truly beautiful, some nearly anguishing.  As Deborah Madison, author of Local Flavors, writes, “I assure you that your farmer’s market will never again look the same.  Nothing you eat will look the same!  This inspiring and enlightening book will give you plenty to chew on.”  Yes, it is noble, and give us much to think about as we try to live better lives; Bill McKibben is right in his blurb that says that their account shows us how we might
live in a way that is “better for this earth, better for the community and better for our bellies.”  But  here is why I list it now: it was just a hoot to read and I really grew to care about them. They can really write.  It was a great saga. I couldn’t put it down. Yay.  By the way, I showed the cover art of the wonderful hardcover ($24.95) above,  although the paperback has a new design.  And a new subtitle, the more prosaic Eating Locally on the 100 Mile Diet.

Charlie Todd & Alex Scordelis  (William Morrow) $19.99  I know I often list heavy books about theology and social criticism and social injustice and deep stuff about our inner lives.  It’s what we do, mostly, and we think our readers appreciate knowing books about the intersection of faith and culture, worship and work, prayer and politics.  I love regular non-fiction. But sometimes, I just am taken with a book, or even a part of a book that doesn’t have too much point.  I had know idea about “Improve Everywhere” (but my kids knew, and you probably do to.)  They just pull off these large-scale outdoor stunts, pranks that they truly insist should not harm anyone, with a network of folks that show up that they call “agents.” (I’m not making this up!)   They invade a Best Buy store with hundreds of people dressed in blue and kakhi, and watch the mayhem for a bit.  They recruit people to “freeze” in Grand Central Station, freaking people out. They host an autograph signing in a real bookstore with an author that has been dead for a century, until the store makes ’em leave.  They are unpredictable, off the grid, loony, brave, and I think on to something.  I’m just not sure what.  This book explains some of their best pranks, how they came up with the ideas, and I think explained the details of what actually went down during the actions.  I can’t actually say, because I was laughing too hard to actually read it all, and went on line right away to see this stuff.  The Youtube videos are  entertaining, but–and I’m not just saying this–the book really is better. In the acknowledgments, the authors admit that they’ve learned about the “Situationists” art movement, but they mostly thank Andy Kauffman and the Flaming Lips in the acknowledgments.  Of course they do.  Check out .www.improveverywhere.com.

I have not read nearly any novels this summer, although (as you can see) my love for memoirs 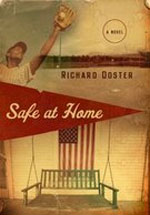 leads me to books that nearly seem like fiction—who could make up this kind of stuff?  Beth has covered a lot of fictional ground, though, and wanted to give a shout out to a writer we respect, a smart guy who edits a very thoughtful magazine called byFaith, Richard Doster.  Doster’s novel of last year, Safe at Home (Cook; $6.99) was a 2009 Christy Award Nominee and is now available in an inexpensive, handsome mass market sized paperback.  It is about a sports writer, covering baseball in the south about the time of the civil rights movement. It covers sports, yes, and has a classic Southern feel, taking us into the spring of 1953, in a small town called Whitney. (Doster himself lives in Atlanta, and is a Mississippi native.)  As the town comes to grips with racial integration, some very moving stuff unfolds.  Beth loved it, actually, and insists that one doesn’t have to be a baseball fan to appreciate the well-told story.  One doesn’t have to like bee keeping, necessarily, to enjoy The Secret Life of Bees, of course, and Moby Dick isn’t really just for fisherman.  Get it.
.

Crossing the Lines is Richard Doster’s new one (Cook; $14.99) and it picks up where Safe At Home ended.  The reporter Jack Hall has moved and yet finds himself on the fault lines of race and class as he is sent to cover the Montgomery bus boycott for his new paper.  Beth may not be a scholar or historian of this, but she knows a bit about the civil rights movement, and was impressed at the historical accuracy that Doster carries.  Some rare names are mentioned, showing us he’s done his homework on the details.  More importantly, though, for a novel, the story rings true. The characters are interesting.  The plot unfolds well, the writing is much better than average.  Thank goodness for this kind of fiction, rooted in a Christian worldview, but not didactic or preachy. It is full of drama, though…  Highly recommended.