Yesterday I wrote a brief invitation to consider poetry—not just the idea of it, but to actually invest in and read some poems.  I quickly gave the old shout out to a few of our favs, and then described the first of four friends  (ahhh, how ’bout that alliteration?) who have each recently published poetry volumes.  I wanted to tell you about these because they are friends and we would love it if you supported them—sort of like going to the verbal deli and asserting, right out loud in front of everyone, “I’ll take a pound of poetry, please.”   These are most likely writers you don’t know about, so we’re doing our cool thing of letting you know.

Also in yesterday’s post I shared a few poems from the first of the four,  Kent Ira Groft, from his lovely devotional book rooted in the Ignatian spiritualilty method, poems he happened to write while on a retreat and sabbatical in India, Facing East, Praying West (Paulist; $12.95.)

Now, I want to tell you about two very different writers, both who used to work for the Pittsburgh-based CCO (Coalition for Christian Outreach) doing innovative and thoughtful evangelism and disciple-making in the context of higher education.  You probably know that I worked for the CCO decades ago and Beth and I continue to serve them as book-sellers, speaker, trainer, cheerleader.  CCO is doing great work linking local churches to near-by campuses and it is in this capacity of lay ministry with young adults that Lew Klatt and Michele Barnes McClendon became friends of mine.  To say that I admired their ways with students, their fidelity to the gospel, and their good work with CCO is an understatement.  I can vouch for their integrity, their passion, their ministry, and their well-read, bookish disposition.  It doesn’t surprise me that both have been writing for a while; they have been poets in word and deed for years.  It doesn’t surprise me that both are now published poets.  And, while CCO didn’t intentionally shape their literary stylings, it did shape their worldview.  I would say that, happily, these are both integrally Christian, but not usually overtly so.  To swipe the old gal’s line, they “tell it slant.” 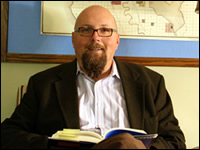 Lew now teaches in the English Department at Calvin College (Michigan) and has been having his work published in prestigious journals for some time now.  He is doing a workshop at the famed Calvin Festival of Faith and Writing this very weekend, and perhaps some of those talks will be recorded or shared. He is dear, dear guy, incredibly smart, and may more than the other three friends I’m celebrating in this column seem like the caricature of a bohemian poet (as long as folks don’t know that he went to seminary, too.)  That shaved head and long goatee; the cool delivery, the English prof job.  Yep, he’s got the coffee-house cred.  And his work is informed and demanding.

There are cows of higher mathematics in Interloper’s pages.  Invention, imagination, thinking invited to test what is new, what hasn’t been imagined—-these are given pride of place in Klatt’s poems…The book is a field guide for any mind exercising to learn unknown transfers and connecting combinations. 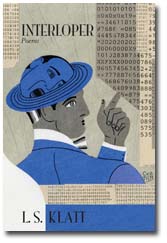 The image of poet as interloper (who traffics where perhaps they don’t belong) is important, here. (The word is from a Whitman line in the epigraph.)  He is here sticking his curious nose into everything—from Native American landscapes to modern car crashes, from contemporary commerce to homage to Walt Whitman.  One poem is called Chicago (with a nice nod to Sandburg) while another is Nebuchadnezzar and the Paparazzi and yet one is The Leek as Bazooka  I liked one curiously called The Beet as a Bloody Tenet.  I don’t think I’ve ever read a poem with “quinces from Persia” before.  And I know I’ve never hear a poem called ekphrastic.

Crazy stuff, this free verse, odd sounds (beyond Hopkins), meditative discourses, a line from Jonathan Edwards, another a riff on a painting I’ve not heard of, and a few inspired by a journal entry from Emerson.  Mostly, though, he is being creative; doing art.  Here is a line from the back that I love as much as any in the book: (for Klatt) “words are musical and versatile, more about play than utility, and he therefore seeks to dislocate language to freelance and maneuver, to alter common sense on the way to new sense.”

Careful reading pays off, though, eventually, with some new visions, indeed:

pears become guitars, racks of ribs are presented as steamboats, and helicopters transmute into diesel seraphs….in symbols that scat and ricochet, the interloper scores a new song, one that composes—and decomposes—on the page.

Interloper won the prestigious Juniper Prize for Poetry and it is a thrill to announce that this important Amherst publisher saw Klatt’s work worthy of serious publication.  One may not understand all these lines. (Ha!  One will not!)  I wish I could reproduce some here, but there are squiggles and 8-balls and pi signs and Chi-rhos and games of hangman and the darndest stuff one ever saw in verse.  I don’t think it is merely frivelous, although it is allusivity gone gonzo.  He plays with words, with sounds, with lines, with images, so many images– I am left speechless and wondering.  Man, this is a piece of work, deeply moral, somehow, God-drenched and weird.

Some, I really don’t get. Some were so cryptic that I had to laugh, and yet wanted to
“do it again” like a kid dizzy from spinning.

And then was the awful line, the one I knew to be about the death of my father in a horrible car wreck, and my pain; even here, it isn’t exact or representational, and I know Lew and his loved ones have also experienced excruciating grief.  The tears that well up even as I write are for you, too, my friend.

The husk of his car
crumpled like a Coca-Cola
can. You stick your head in
the front (passenger) door
& pick through Ovid
& Aristotle covered with
pulverized glass
like sapphires
like sugar
The library is open
& how you remember
your father at a time like this
is excruciating fire
& smite.  The world
is aluminum & how you know
is because
you are the car
& no one (no one else is)
driving