I don’t have time to do much of a review but wanted to post for BookNotes friends a request to keep us in your prayers.  In the next few days we will be at five different events, lugging late, driving through the night, unpacking and re-packing.  When it rains it pours, they say, and this configuration of book-selling opportunities is a great chance to serve God’s people.  And we sure don’t have to face the persecution or shipwrecks of the Apostle Paul on his journeys.  Can you imagine how far that man walked?  And he carried books (well, scrolls and manuscripts) with him.

I bet we’ll cross paths with some of our faithful readers, and we’ll have tons of manuscripts!

Momentarily, Beth, and I will head out the door for Manhattan, selling books at the prestigious Redeemer Presbyterian Church’s Center for Faith and Work.  The speaker is N.T Wright and we are very excited to be with him again.  They expect a big crowd, hosted in a historic building on Central Park West.  We are nervous and giddy with excitement.

Add this in after Chris Carson took this shot of our set up.  Got it set up in record time!, Wright books and books about vocation, calling, work and witness in the world.  And some Tim Keller resources on the right end, since this was a Redeemer Presbyterian Function.

This is a very appropriate event for us, since the Center for Faith and Work (who partners with our friends at Cardus to publish Comment, by the way, a journal I sometimes write for) is all about helping people live our their Christian discipleship in the marketplaces and studios and offices of the daily work-world.  They invite and equip folks to honor Christ’s Lordship over labor, helping people connect the dots between Sunday and Monday, between prayer and politics, between worship and work.

N.T. Wright has longed helped us imagine how the new creation/Kingdom which was launched with Jesus’ resurrection–which he steadfastly argues was historical and bodily—might effect the missional ways of the church of Christ.  That is, how does the mission of God become our mission?  How can our congregations—and church members, scattered throughout the professions and workplaces and social institutions thought-out the week—take up the responsibility of witnessing to the ways of God?  How can we develop a Christian view of work?

Wright’s little book called For All God’s Worth (Eerdmans $10.00) is exactly on this theme.  The first half is about what one might consider traditional worship, and the second half is about worshiping in the world, daily living out the claims we make in our liturgy.

Although it may be missed, his very thoughtful and important small hardback, The Challenge of Jesus (IVP; $18.00) has a section in it inviting each and every worker to think of the implications of faith for his or her disciplines, industry or profession.  (See the section “Retaining and Forgiving Sins.”  He even talks a bit about his own work being “in but not of” the world of higher education, and witnessing there to his Christian perspective.

Simply Christian (Harper; $24.00) also mentions work.  So does his one on the Holy Spirit (The Cross and the Flame, now happily available again.)  I don’t recall, but I bet the one on evil, does, too..  (It at least discussion globalization and such.)  Because he fleshes out the implications of this idea of bodily resurrection and new creation, it is natural for him, it seems.  He rejects a “sacred secular dualism” and lives out whole life discipleship, Biblically-informed and with God’s energy and creativity.

Of course his new one is all about character.  It is called After You Believe: Why Character 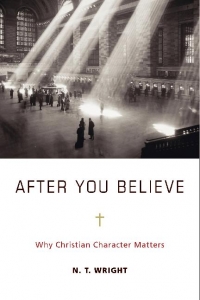 Matters (HarperOne; $24.99.) We suppose this will be his theme tonight.  It should be obvious that “thinking Christianly” and serving God as agents of gracious renewal within the various spheres and occupations of the marketplace demands more than fresh ideas (although certainly it does include that, new theories, new proposals.)  But it demands new people.  In what ways are our characters shaped into Christ-likeness, and what sort of ethics and values does that create?  Character?  This is a very, very important matter, and Wright tells us why.

I’ve said before that the book starts a bit slow. Hearing him speak, though, about the ways in which classical virtues (the Greeks and pagan Romans) and uniquely Christian virtues do or don’t overlap and why character is so misunderstood in our postmodern culture, reminds me that this foundation few chapters are very important.  Soon enough, the book explodes into relevance and practicality, as Wright calls us to live with  character, as people of virtue.  We recommend it.  Maybe you could even read it at work! 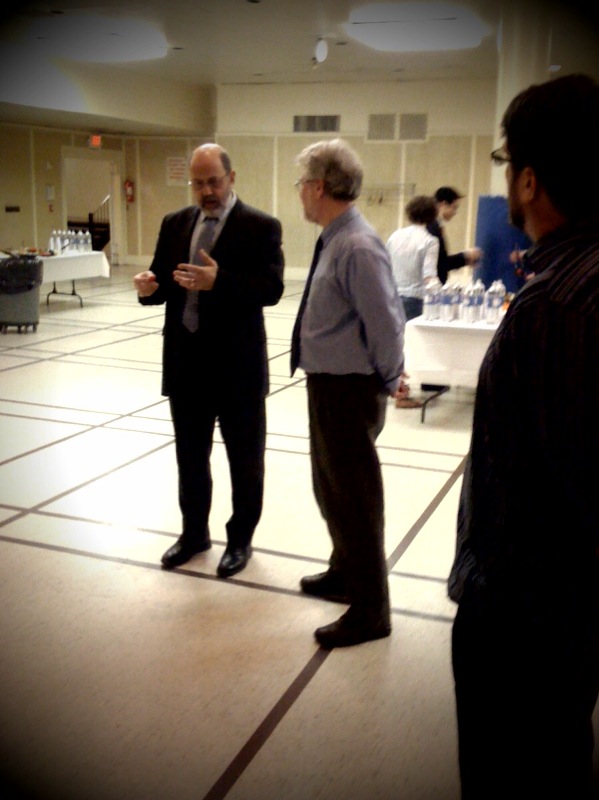 This shows that Tom is animated even in those few moments between speaking to a crowd of 800 and his autographing session.  We were discussing our mutual friends Brian Walsh & Sylvia Keesmaat who had presented at paper at the Wheaton conference on Wright earlier in the week.  I wanted to note that both Wright and Borger endorsed their Colossians Remixed on the back–my name is right there next to his!—, but that seemed a bit of a stretch.  Ha!  I’m hardly worthy to be standing next to him, pestering the poor chap about books and authors when he just needed a 2 minute break before the reception.  Thanks to Scott, too, every lurking around the edges of this crazy work of ours.