I have been wanting to write about this, but thought that sharing it nearer “three kings day” or Epiphany would make more sense.  You know we  believe in following the liturgical customs that keep the Christmastide alive, so writing about a seasonal book after the 25th is not me being “late” with this timely review.  I hope you haven’t packed up your creche sets yet!

The wise guys.  Hmmm.  Mentioned only briefly in the gospel of Matthew.  What more can be said?  What sort of historical traditions are there in speaking about their journey to the Christ child?  What did the earliest church say about them? 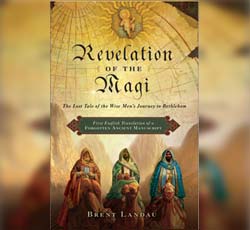 A book has just come out that is really, really fascinating, even if it doesn’t shed much serious light on the actual Biblical text.  I suspect it is pure legend, but as pure legend goes, it may be important.  The Revelation of the Magi: The Lost Tale of the Wise Men’s Journey to Bethlehem, as the cover boldly puts it, is the first English translation of a “forgotten ancient manuscript”   Brent Landau, a specialist in ancient biblical languages and literature, has given us a great gift in unearthing and translating it all, after doing extraordinary literary detective work in the Vatican Library archives–set on his own far journey by a mere mention in an academic journal and obscure footnote or two.

There’s no murder or mayhem of The DaVinci Code sort here, but this does have the benefit of being a real manuscript.  It has been unread for literal centuries, never translated into English, but was—as the translator tells us in a thrilling introduction— cited on several occasions in several places throughout the ancient Near East.  Although it was originally penned in Syriac (one of the reasons it has been ignored, since few Christian scholars who do this kind of research know Syriac—if only it was written in something more commonplace, like Copitc) it must have made its way into a few other cultures in the early centuries as it is cited and named. Landau studiously translated it with the help of J.F. Coakley, Professor of Syriac at Harvard.)  Here is a bit of the geneology:

After the existing manuscript was copied down at the Zuqnin monastery in southeastern Turkey by an anonymous monk at the end of the eighth century, it changed hands at some point and was kept in a monastery in the Egyptian desert. There it stayed until the eighteenth century, when G.S. Assemani, collecting manuscripts on behalf of the Vatican Library, brought it to Rome, where it resides today.

So we know it was copied in the 8th century, in Turkey.  It appears it was cited, by the way, by a monk writing a commentary on Matthew in the fifth century, so it seems to have been written at least that early.  The Syriac custom of referring to the Holy Spirit in feminine grammar was popular in the second through fourth centuries, and Revelation of the Magi does this, so it is almost certain it has an early dating, perhaps as early as the third century.

Could it be the actual narration of one of the historical wise men—all 31 of them?  Fun to consider but, uh, no.  Even the liberal scholars who distrust the historical accuracy of the gospel accounts–Karen L. King and Marvin Meyer and John Dominic Crossan all offer fabulous endorsements on the back cover–would not suggest this is authentic in that sense.   Crossan does say, though, “of the many earliest Christian documents recently discovered inside sealed earthen pots or in forgotten library shelves, Revelation of the Magi is by far the most fascinating.”

It is a fantastical tale, about these mystic Magi (a poor translation of the word, we learn) from the far-away land of Shir (“at the shore of the Great Ocean.”)  They are claimed to be descendants of Seth, Adam’s son–yes, this is one sweeping, grand narrative–and end up back home being baptized by the Apostle Thomas.  They had followed a star, which leads them to a luminous star child. They argue with Mary.  They understand great thing about God’s mercy.  Whew.  Take a deep breath, this is epic, nearly Tolkien-esque.  Meyer says it is “theologically sophisticated” while Crossan says it has “radical depth.”

Well, I’m not so sure; no, rather, I am sure: it isn’t theologically orthodox, or Biblically-faithful, so it doesn’t have the depth of true truth.  We do not recommend extrapolating new doctrinal insight from these sorts of things.  It is apocryphal, to say the least.

Still, we sure can say that it is a fascinating document, it came from somewhere, and those that wrote it were doing something, saying something about what they wanted said about their interpretation of the Nativity.  Is what they said important?  Is it a window into some sort of window…?

Please, if this sort of thing frightens you, I’d say don’t read it, or, better, read it and learn a bit about fictional stories told in the first centuries of Christmas stories.  If Christian origins intrigue you, this might be a fun book to have.  The forward itself is a good reminder of the fact of ancient monks who traded tales and wrote amazing stuff, kept in Egyptian faith communities, or in places like Syria.

For what it is worth, here is a fascinating review of it by a scholar and reviewer who can do a much better job than I.  I do disagree with his assertion that the forward wasn’t helpful: I enjoyed it immensely and learned again, in a few quick pages, how close linguistic readings of rare texts can be understood and how this theological/literary detective work happens.  I do love the way he gets at this—suggesting it can function as Midrash. 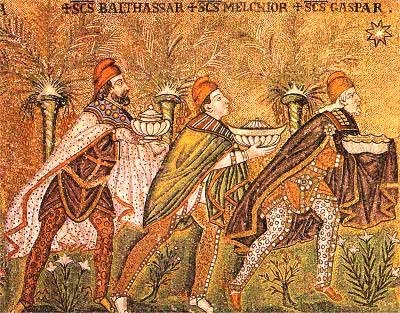 Here is a free download of the great electric guitar version of We Three Kings by one of the best guitar players in the world, Phil Keaggy.  Enjoy!

BLOG SPECIAL
$15.00
regularly $22.99.
Revelation of the Magi: The Lost Tale of the Wise Men’s Journey
order here
takes you to the secure order form page
inquire here
if you have questions or need more information

4 thoughts on “Revelation of the Magi: The Lost Tale of the Wise Men’s Journey to Bethlehem”