It always happens that when we go away to sell books at a large event, we return home only to find a few books that arrived in the shop the day we left.  If only.  That’s what I routinely say.

Well, I didn’t get to show or sell these at the Jubilee conference last wee, so I’m saying it.  If only.  You can make it better by buying them now.  At least I can sell a few of these that would have been popular in Pittsburgh. 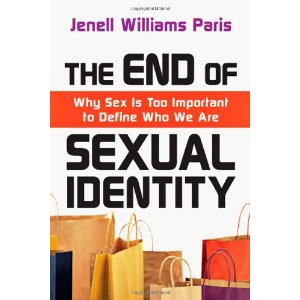 The End of Sexual Identity: Why Sex Is Too Important to Define Who We Are  Jenell Williams Paris (IVP) $15.00  Had I taken this to Jubilee, some thoughtful leaders and mature Christians would have been very eager to consider it.  In fact, a few had asked us about it, thinking it was to release in March sometime.  Yet, it may not be for everyone.  It is very thoughtful—written by a progressive, evangelical anthropologist—and will be sure to attract the ire of some.  If I understand Paris correctly, she is trying to de-emphasize the ways in which sexual identity has become an idol (both in the culture at large and within the Christian subculture.)  Just for instance, concepts like “gay” and “straight” are relatively recent developments in human history.  As it says on the back cover, “We let ourselves be defined by socially constructed notions of sexual identity and sexual orientation—even though these may not be the only or best ways to think about sexuality.”

This offers a clearly Christian standard of holiness for sexuality, but one that takes into consideration the ways of our postmodern times.  She is attempting to move beyond culture-war impasses, but I am not sure most on any side wants to enter that kind of gracious space for genuine conversation.  (She tells the story in early in the book about going to a gay bar for the first time with a lesbian fellow-graduate student. She had never been to a bar before, gay or otherwise, and yet was comfortable and attempt to be gracious with her new friends.  When they discovered that she held to fairly traditionally-understood Biblical sexual ethics, her classmate announced that they simply could never be friends, calling Paris a “homophobe.”)

Andy Crouch notes that “this is a singularly important book, about sexuality but also about culture, and it is a model of charity, clarity and creativity.  While this is certainly not the last work on Christian sexual ethics, it could be the first word of a better and more honest conversation about holiness and faithfulness amidst our age’s sexual confusion.” 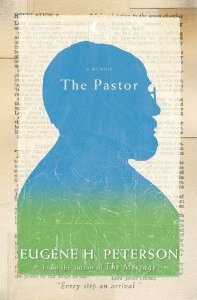 Pastor: A Memoir  Eugene Peterson (HarperOne) $25.99
Well, I’ve been saying “if only” about this, too, because had I taken it
to Jubilee I am sure we would have sold a batch.  Not, interestingly,
to the college students, probably, but to adults, former CCO staff,
ministry leaders, some of the speakers, the volunteers staffing the
missions booths, and to the good representation of pastors who show up
at Jubilee just to check it out and learn about young adult ministry.
And I would have pressed it into the hands of any young adult who said
they were thinking of going to seminary or sensing a call to vocational
ministry.  This poetic and at time mysterious volume–why tell this, but
not that?—could be a God-send, a message back to the trenches from a
serious, wise, fellow-traveler on that journey.

This is a book that I read in an advanced manuscript months ago, and
I can’t wait to read it again, more slowly.  I have made myself a
promise that I will read everything Peterson writes, and this was a
delight. Those of us that know him a bit know of his penchant for slow old-fashioned storytelling and plumbing the ordinary for great meaning.  The Pastor his life story, his memoir, his understated reflections
on being callid to the ministry, his early years doing a Presbyterian
church plant north of Baltimore, and his eventual rise to fame as Bible
translator, writer of The Message, and his shift to public
speaker, author, poet, contemplative, and nature lover.  Anyone who
likes a well-told story, or Peterson’s good prose, or a fairly ordinary
testimony of a fairly ordinary pastor of a fairly ordinary church will
surely love this wonderful new memoir.  Clergy folks, or those that love
clergy folks, will want to have it.  Listen to what Dallas Willard
says: “If you are hoping to be a pastor, or just to understand what that is,
get this book and soak in it for at least three full days with no
distraction. It may save your life and make you a blessing.”

Kings Cross: The Story of the World in the Life of Jesus  Timothy Keller (Dutton) $25.95 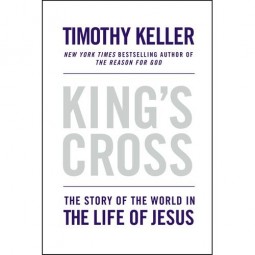 Last week I had published a few brief reviews in Comment, an electronic journal I read faithfully (and commend to you.) I knew this was new Keller book would arrive any day, so I wrote the following, which I’ve edited just a bit:

Most savvy readers know who Timothy Keller is. His church in the well-heeled and
culturally savvy sub-cultures of Manhattan and its plants are known as
shining examples of faithful and relevant contemporary ministry.
Redeemer Presbyterian’s support for thinking about work, their
encouragement of artists, and their commitment to urban flourishing is
vital. And Keller’s recent writing ministry has caused not a few
journalists to note his effective way with words, making compelling
cases for Biblical truth and a Christian worldview.

In this brand new book, Keller brings his clear and insightful
approach to a study of the life of Jesus (mostly told through the eyes
of the fast-paced gospel of Mark). Yet this is not a traditional
commentary, exegeting line by line, but a broad and sweeping overview of
key themes that relate particularly to his urbane audience–and,
perhaps, anyone wondering if the New Testament documents about Christ
are not only historically reliable, but also keys to unlocking our
deepest human longings and our culture’s deepest social needs. The
chapters are each titled with a poignant word: “The Dance,” “The
Waiting,” “The Turn,” “The Sword,” or, in the second-to-last chapter,
“The End.” The last chapter? “The Beginning,” of course. A great new
resource for good conversations exploring the basics of the life of
Jesus, and an invitation to live into the world His gospel creates. 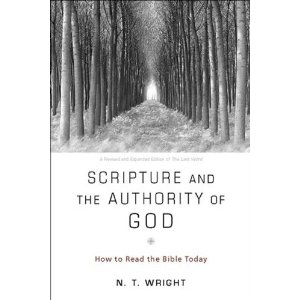 Scripture and the Authority of God: How to Read the Bible Today  N.T. Wright (HarperOne) $25.99  I’ve often said that Wright’s other good book on how best to read the Bible just a bit too brief to be really helpful.  I was eager to see his new one, long-awaited, and now here.  Alas, this is an expanded version of The Last Word which they now have on the front cover.  Not sure how much new material is here (would have been nice to know from the publisher, eh?) but it seems to me that it could be nearly twice as much.  It is considerably re-packed and nicely revised and expanded.  It is nice that it now matches his previously three from HarperOne, with uniform black and white hardback covers.  I’m sure it is going to be great to read, a fine and important contribution, ideal for adult classes, serious readers and thoughtful beginners.  Rave endorsements on the back are from authors as diverse as J.I. Packer and Brian McLaren.  Timothy George says “Here is Wright at his best…uncommon wisdom for all who read and love the Bible.” 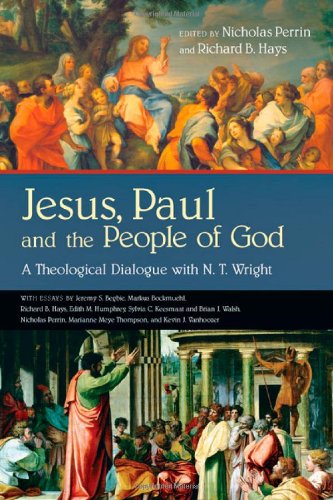 Jesus, Paul and the People of God: A Theological Dialogue with N.T. Wright  edited by Nicholas Perrin and Richard B. Hays (IVP Academic) $24.00  For my own tastes, this may be the most exciting book so far this year.  It is certainly the one I couldn’t wait to see, and I immediately skimmed it, even as I was exhausted from Jubilee packing and a general lack of sleep.  A bit more rested, I realize now I was not temporarily loosing touch for wanting to tell everybody about it: this is, indeed, one of the great, great books of the new year.

It was last spring when we had the immense privilege of setting up a N.T. Wright book display for the New York Center for Faith and Work (of Redeemer Presbyterian) as they hosted Wright doing a lecture on his then-brand-new book on character, After You Believe. Tom had just come from a several day conference on his work held at Wheaton and he was happy to talk a bit about it.  My good friends Brian Walsh and Sylvia Keesmaat had done one of the more, uh, memorable presentations about Wright and he described it just a bit to me.  And pushed back just a bit.  (He and Brian have been very good friends for years, and Sylvia got her PhD under him and is also a close friend.)  I was thrilled to realize that the Wheaton symposium was all on line and the lectures given and critiques offered and Wright’s replies were all able to be watched.  It was a fantastic educational experience and a great example of significant, candid and friendly intellectual discourse.

I hope to explain this book in greater detail later, but know that it includes some very well crafted papers about Wright’s majisterial work, from Marianne Meye Thompson doing “Jesus and the Victory of God meets the Gospel of John” to Richard Hays (on Jesus and what we can know) to Edith Humphrey (on Paul) to Jeremy Begbie (on Wright’s ecclesiology)  to Kevin Vanhoozer on “Wrighting the Wrongs of the Reformation? The State of the Union with Christ in St. Paul and Protestant Soteriology.”  And more!

Here is why I have to commend this so eagerly right away:  Brian and Sylvia dared to ask–in fine taste and good smiles—some hard questions of the conference and of Tom’s own work.  Basically, they ask the “so what?” question.  They push Wright to reflect on how a clear call to justice work might be better sounded by his Biblical study and whether his now-many and properly famous books are going to truly motivate anybody to care much about the sorrows of this world.  Some found it a bit blunt, I’m told, and yet Tom replied with graciousness and both agreed with their desire that this academic work not be in vain, and defended his own style a bit in some fair rebuttal.  Part of his reply is that, yes, he does desire for his work to bear fruit, including an informed church on the march for peace and justice.  I must say that besides this dramatic moment of breaking the professional etiquette for such a fine scholarly conference, Brian, and especially Sylvia, brought some very (very) interesting exegesis of one or two of Jesus’ parables which created some vigorous conversation afterwards.  The scholarly conversation record in this book was generally so insightful in part because the scholars knew Wright’s body of work so well, and because he was so gracious in sitting for their evaluations and critiques and then responding.  This is a fantastic project, interesting, well-informed, and charitable.  It is a resource worth having.  Especially with those important prophetic words from Brian and Sylvia: who cares and so what?  Maybe every book should come with a question like that attached…

One thought on “Five brand new books: Janell Paris on sexuality, a long-awaited memoir of Eugene Peterson, The Pastor, the new Timothy Keller on Jesus, N.T. Wright on the Scriptures, a collection of critical engagement with the work of Wright,”