Between waiting on customers, mailing out great books, and ranting on facebook about the latest strong-arm policies of A-zon, I haven’t had time to write as much as I need to.  Or post that which I’m working on.  Lord willing, I’ll start a stampede of suggestions soon.  It’s certainly not too late to order books for holiday giving.  Do recall, we are still in Advent: the Christmas season and the historic 12 Days of Christmas only starts December 25th and takes us to the day of celebrating light (and the gift giving of the wise men from the far East, Epiphany.)  So don’t fret, there’s lots of gift giving occasions over the next few weeks.  And we are shipping packages out quite promptly.

I have a pretty long review, a two-parter, coming up eventually, on a book I’ve been waiting for, well, for maybe two decades.  I’m not kidding; long-awaited hardly touches this.  It is by an author I respect and read eagerly and carefully, about a topic that is almost as close as anything other than the Really Big Stuff (God’s Kingdom known in Jesus, my family, the world’s great needs, my own inner life, you know.)  And yet, this thing so close to my heart has helped me grow in my Christian living, in my commitments to my family, has illumined the world, etc. etc. etc.  In other words, it is one of the Big Things.  I’m talking about the music of Bruce Cockburn. (Here, Here, Here, Here.)

Now is not the time to explain all that.  If you know Cockburn, you most likely know what I’m 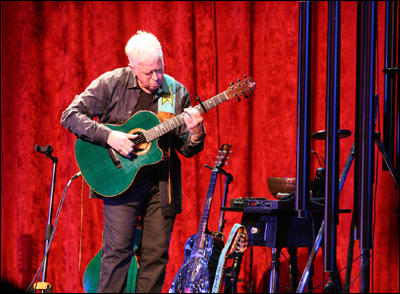 talking about. If you don’t, you’ll learn soon enough as I tell all about why the brand new Kicking at the Darkness: Bruce Cockburn and the Christian Imagination by Brian J. Walsh (Brazos; $18.99) is a work I’ve been so eager to see published.  I hope to get this serious review up soon, but for now, please know three simple things:

1.  It’s not too important, but I’ll say it: I did an early read through of this, have read most of it very carefully before publication (Brian is a good friend and he humors me allowing me to make some suggestions which I suspect he mostly ignores) and I have a glowing blurb on the back.  I can’t tell you how proud I am, and all I did was say how much I liked it.  Still, this means a lot to me.  I trust you are at least a little amused to know that.

2.  If you want to give a present to anybody who is seriously interested in pop music, the best rock and roll, thoughtful lyrics, and the nuanced and sometimes allusive integration of faith and culture, spirituality and sexuality, pop and politics, Walsh’s exploration of the often amazing lyrics of Bruce Cockburn is a great gift. I mean that literally: it would make a great gift for you to give to somebody who is interested in music.  Cockburn is truly esteemed—heck, he’s quoted in a song by Bono and U2 (on Rattle and Hum)—and is playing (and being interviewed by Walsh) at the Calvin College Festival of Faith and Writing this April, a prestigious invite that doesn’t go to just any rock star.   Brian has studied Bruce’s lyrics carefully and brings the Bible into conversation with lyrics from many of his 30-some albums.  It is a great example of taking seriously the art of being a singer-songwriter and rock performer. (Please realize, this is not “contemporary Christian music.”) As I’ll explain later, Bruce Cockburn is one musician that cries out to be taken seriously, even though he himself has a sly sense of humor and has that occasional introverted streak.  Want to get the rockers on your list thinking deeply about all that the art-form can do and say?  Get ’em this book.

3.  Walsh has a fairly unique take on the unfolding drama of the Bible—the whole creation-fall-redemption-restoration Story that N. T. Wright developed in part out of discussions with Walsh years ago, and he has the whole worldview thing going on: the key questions of who we are and where we are and what is wrong and what is the answer which were explored in Transforming Vision, deepened in Truth Is Stranger Than It Used to Be, and floating all over his co-authored anti-Empire commentary, Colossians Remixed as well as his parts of the extraordinary study of cultural displacement, Beyond Homelessness.  I think I see some readers nodding in dawning acknowledgement—oh, that guy.  Brian Walsh, campus minister at University of Toronto, writer for the Empire Remixed blog, farmer at Russet House.  And  Bruce Cockburn, that Canadian folkie turned Christian, turned activist, turned liberation singer, turned mystic. He played on SNL once, that big hit about wondering about the lions?  Oh yeah, Walsh has always quoted him.  Good stuff.  He has a whole book of that kind of exploration of Cockburn songs?  Right.  So Kicking at the Darkness is basically a look at Bruce Cockburn in light of Brian Walsh’s take on the Bible.  Or is it Brian Walsh’s take on the Bible in light of Bruce Cockburn?  Or, mostly, the Bible’s take on Walsh and Cockburn?  Whatever, this is amazing stuff, good cultural hermeneutics and amazingly rich Scriptural studies, done with a hope that readers will allow themselves to be touched by God’s grace and start following King Jesus with prophetic imagination.  Want a fresh take on the Bible and the life of the commonwealth of God in a broken, postmodern world that still is “a world of wonder” and where there are “rumors of glory”?  Order this book and hold on tight.

Here is something I wrote about it that was published the other day in the on-line newsletter of the faith-based Center for Public Justice, Capitol Commentary.  It was written for an audience of readers interested in politics and civic life, and had to be brief.  I hope it will do for now to whet your appetite. 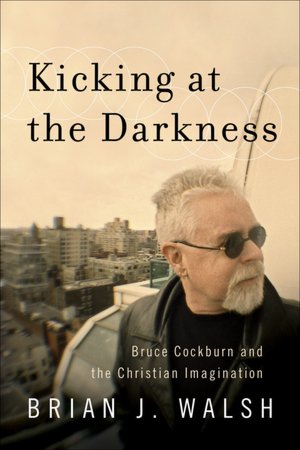 Kicking at the Darkness: Bruce Cockburn and the Christian Imagination  Brian J. Walsh (Brazos; 2011) $18.99  I’ve never agreed with those who say that Bruce Cockburn, the award-winning, internationally-known, Canadian pop star, went through a “Christian phase” and then entered his “political phase” but eventually left that to write in a romantic period.  Brian Walsh’s breathtakingly thorough and very rigorous, close reading of the body of Cockburn’s work shows us that faith and spirituality, politics and cultural change, sexuality, the search for meaning and the demand for justice in the face of global inequities, have always been interwoven artfully in all of Cockburn’s 40-year’s worth of recordings.  True, Cockburn cited C.S. Lewis and seemed more overtly Christ-centered in a few albums in the late 70s, and, after working in refugee camps and seeing gross injustices in Central America in the 1980s he wrote some fiery songs of liberation theology, including a lovely, if romanticized hope for the Sandinista revolution in Nicaragua.  And who else has written a blazing rock song about the International Monetary Fund?  Agree with Cockburn’s social analysis or not, he is informed by his charitable work on nearly every continent and a deep longing for a world mad
e new.  Walsh–no stranger to the CPJ community for his earlier works on worldview, Christian scholarship, and how the Bible can lead us to subvert the unjust empires of this world—knows as much about Cockburn’s music as anyone, and his effort to have Cockburn’s lyrics in conversation with the Bible is a gift for anyone who loves thoughtful poetry, contemporary politics and Biblical studies.  Very highly recommended.

And here’s my little blurb on the back.  The phrase “joy will find a way” is the title of a popular early Cockburn song, by the way.  Experiment in criticism is a sly reference to a book by C.S. Lewis.  Okay, I’m showin’ off. The last line is most important.

I’ve been listening to Cockburn for three decades and reading Walsh almost that long, and I can hardly imagine surviving these times, let alone believing that joy will find a way, without the artistry and insight of both.  This is an extraordinarily ambitious project, years in the making, and there is profound insight on every page.  Whether you are a seasoned Cockburn fan or not, this is a rewarding, provocative, experiment in criticism.  I recommend it with great enthusiasm and with immense gratitude.

SPECIAL
DISCOUNT
Kicking at the Darkness:
Bruce Cockburn and the Christian Imagination
regularly $18.99
sale price $13.29
(please mention this review)
3O% off
for a limited time
order here
takes you to the secure Hearts & Minds order form page
just tell us what you want