I do hope you saw my long ramble of a review in the last BookNotes post, a book written in honor of Ron Sider, Following Jesus: Journeys in Radical Discipleship: Essays in Honor of Ronald J. Sider edited by Paul Alexander and Al Tizon (published by Regnum and on sale from us for just $25.00.) I wrote that review with great joy, and a bit of trepidation.  This stuff means the world to me and Beth and I nearly sense that this new book in honor of our friend Ron Sider is, in some odd way, a bit of our story, too.  I know not all of our friends agree, or care quite so much.  But this is important to us and hits close to home, as they say.  Not that we’ve ever traveled to developing nations or are committed to new monastic practices; our earliest relationship with Ron was as an author (although I helped our Presbyterian geography professor bring him to my college in the mid-70s which may be the first time we met.)

(Interesting, hot-off-the-presses aside: our dear, dear friend and former Pittsburgh house-mate Jennie Korn Geisler, is interviewed in a fascinating new scholarly exploration of what some call “the evangelical left” — which includes quite a lot about Ron Sider, the writing of the Chicago Declaration, the founding of Sojourners, the rise of the popularity of racial justice themes among evangelicals, sounded by the likes of John Perkins, the renewed interested in Anabaptist perspectives, the influence of Francis Schaeffer among some, the rise of alternative simple living, Radix magazine, and so forth.  It is cleverly called Moral Minority: The Evangelical

Left in an Age of Conservatism and is meticulously written by prestigious Asbury College historian David R. Swartz (University of Pennsylvania Press; $47.50.)  Jennie talks with the author about how Dutch neo-Calvinism (that is, Kuyper’s worldviewish approach to all-of-life redeemed and societal reformation) influenced Pittsburgh’s campus ministry organization, the CCO; their flagship Jubilee conference got started in those years, for instance — we were studying the Mennonite John Howard Yoder’s Politics of Jesus with a reformational philosopher, and took the name Jubilee for the conference from that.  That chapter in Moral Minority on the likes of progressive Reformed leaders like Lewis Smedes, Richard Mouw, Nic Woltersdorff and Wesley Granberg-Michaelson — all who are friends of Sider’s and whose influence is notable in his work — is pretty amazing and made me run in to the kitchen to read it out load to Beth! Following that stream of world-transformative faith was a good addition to Swartz’s study of the evangelical social concern of the 70s and 80s, and it was so wonderful to see my pal Jennie in it.)

So, reading Following Jesus: Journeys in Radical Discipleship: Essays in Honor of Ronald J. Sider felt, in some ways, like it was my own story, certainly giving voice to many of my deepest concerns, even though I wasn’t nationally involved in much and don’t know most of the authors in the collection.  Sure, we had friends at places like The Other Side magazine, and the very first book review I ever got published (and paid for!) was of Sider’s Christ and Violence, which I raved about in Sojourners quite a few decades back.  I was about to lose the job I then had over my peacemaking ministry and we were up to our ears in teaching stuff such as the Biblical material in Sider’s Rich Christians in an Age of Hunger. I promoted his Completely Pro-Life with friends at the Consistent Life network. I’ve followed each new book Sider did and rejoiced, and took courage to do what little we could.

ESA continues to be one of our favorite organizations and just this week had opportunity to tell people about Prism magazine. While it doesn’t say everything that we think needs said about God’s redemptive work in the world (what specialized organization does?) we are truly thrilled to be joining them at the Follow.Jesus.2013 conference celebrating their 40th anniversary. If you are in Philly on the 13th or 14th of July, swing by Eastern College.  We’ll have a large book display with tons of good books. 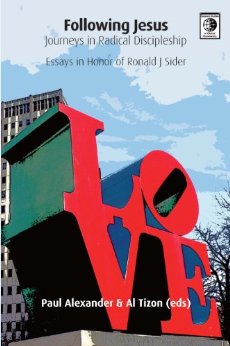 Discipleship: Essays in Honor of Ronald J. Sider edited by Paul Alexander and Al Tizon (published by Regnum and on sale from us for $25.00) is a righteously splendid book, and I predict it will profoundly impact those who work through it.  As I said in the previous BookNotes review, it is quite enjoyable, very well written, and covers a wide range of content.  It is especially strong on Biblical studies and always clear on Christ-centered, gospel-based, wholistic views of the Kingdom.  There are some tender stories, good testimonials by folks whose lives were touched by Ron, and there are good portions of interesting social analysis which provide insightful perspectives on how to faithfully carry on the work of the gospel in our broken world. It is well worth reading.

Again:  promoting this book is important to us, and, if you follow our work here at the shop, you know it is so.  I hope that for some of you dear readers it will be one of those times you’ll just trust us, or humor me, and order the thing.  Sider is retiring, for crying out loud.  Buy the book!  The editors, Paul Alexander and Al Tizon, have put themselves into this project — compiling the book as a gift for Ron, and soon taking over his leadership at the helm of ESA —  and we need to support them.  I really believe that.  Get a few of these, and give ’em away.  Start a book club.  Pick it for your next small group study.  Invite them in to talk about it. (Invite me in to talk about it!)  Well, you get the idea…

Here is what I didn’t share in the last rumination about the books strengths and wonders.  The actual list of those who contribute.  Just check this out.  I hope it inspires you as it should.

FOREWORDS AND INTRODUCTIONS
The first three chapters of Following Jesus are really great, with two forewords by Sider’s long-time friends, Jim Wallis and Tony Campolo, which is followed by an excellent and very moving introduction by the editors who compiled this labor of love, Paul Alexander and Al Tizon.  Just reading these opening pages will make you want to dive in to the deep waters of the text.  And, as they suggest, you may be a bit shocked, but you will be refreshed.

AFTERWORDS
There is a wonderful, wonderful afterword that I cited in the previous review, written by John Dilulio. Dilulio is an active Catholic, serious scholar of domestic poverty and public policy.  And he worked in the White House. His testimony of how Ron ministered to him is a great and beautiful thing to read.  It is an example of what makes this book so good — a happy blend of personal and political, of academic insight tempered with evangelistic stories, of policy proposals and clear Christian discipleship.  It makes it a very rich book, indeed.

nd, further, the complete text of the historic The Chicago Declaration is included as an appendix.  If you don’t know that document, or haven’t read it in a  while, it is important they included it.  Check it out.

Following Jesus, Journeys in Radical Discipleship: Essays in Honor of Ronald J. Sider is a book that will give you clearer glimpses into the nature of the Kingdom
of God and it will draw you close in your relationship with Jesus
Christ.

That would be Ron’s greatest hope, and it is evident in the way this book was crafted. Kudos to Al and Paul and the others who worked behind the scenes getting this book released. It is, indeed, a gift for Ron.  But it is a gift for us all. Thanks be to God.

on sale
$25.00
– all other books mentioned 20% off –
order here
takes you to the secure Hearts & Minds order form page
just tell us what you want