I realize this is being sent out sometime between the night of Maundy Thursday and so-called Good Friday.  I feel like maybe I should offer a seasonal meditation or tell you about books about the cross.

So, I tried to spin this glimpse into postmodern philosophy and the painful complexities of our contemporary quandaries, and Smith’s wise response as some sort of cruciform rumination, and in away it is exactly that.

That wasn’t working, so, no, I didn’t quite go there, but want to send it out now anyway.  It feels urgent to me to post this now as there is another Smith book review coming soon.  Beth and I wish you a meaningful climax to your Lenten journey over these next days, and hope this book review is a blessing, not a distraction. 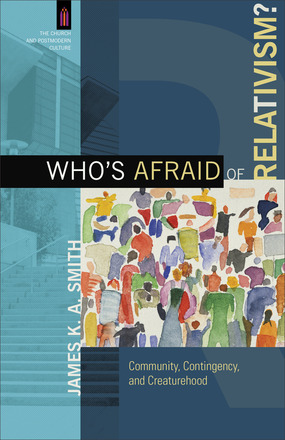 acclaimed series “The Church and Postmodern Culture” by James K.A. Smith. Smith is the general editor in the series, and wrote the latest one, Who’s Afraid of Relativism? Community, Contingency and Creaturehood (BakerAcademic; $19.99.) It is the eighth book in the series and although they are all relatively brief, and written for an educated but not necessarily scholarly audience, some have been a bit dense. They aren’t for everyone. Understood.

But James (Jamie) Smith is an author about whom you should know and this is an important, helpful series.

I offered an overview in BookNotes of some of his important and much-discussed work when I reviewed the great collection of popular level pieces found in Discipleship in the Present Tense (Calvin College Press; $14.00) that was released last fall.  We named it in our “Best Books of 2013” list.

Also, I’ll tell you soon about another truly extraordinary book just released by Smith that, although a bit demanding, should have very broad appeal, a brand new book from Eerdmans which is a guide to the philosopher Charles Taylor.

But first, you should be aware of the very new Who’s Afraid of Relativism? It is, in many ways, a follow up to his must-read 2006 Who’s Afraid of Postmodernism? that kicked off the “Church and Postmodern Culture” series.

Although he doesn’t dwell on it (some may which he did) Smith starts this fresh analysis of relativism by bluntly criticizing J.P. Moreland, D.A. Carson, and even the former Pope, all who raised what he calls “the specter of relativism” — an alleged “clear and present danger” — in ways that are both inaccurate (as they traffic in caricatures and misrepresentations of primary texts) and, ironically, are, he says, theologically sloppy. (They hold to a view of truth that apparently fails to honor the very creatureliness of how God made us and the world.) These authors and other popular evangelicals are just wrong as they “bandy about” views of absolute truth and the dangers of relativism. 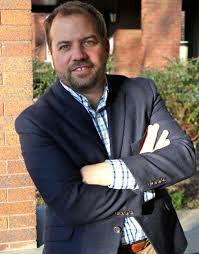 The orienting conviction is that if, even on a “popular” level, we are going to invoke philosophical concepts — even if only as philosophical bogeyman — we have some responsibility to make ourselves accountable to philosophy. So think of this little book as an exercise in philosophical accountability.

Again, he reminds us,

If we want to take relativism seriously, we can’t rail against a chimera of our own making, congratulating ourselves for having knocked down a straw man. To avoid this, I’m suggesting that we engage this pragmatist stream in Anglo-American philosophy as a serious articulation of “relativism.” This will make us accountable to a body of literature and not let us get away with vague caricatures.

In other words, we have to know what we’re talking about when we critique others, and we should make sure we truly have a theologically sound understanding about what we mean by truth and relativism.

The main three philosophers Smith explores to help us know this stream of contemporary philosophy and to help us understand the nature of relativism are in the school of pragmatism (“postmodernism with an American accent”): Ludwig Wittgenstein (whose major work came out in 1953), Richard Rorty (1979), and Robert Brandom (2000.)

Rorty is the one most often cited these days, it seems, when talking about anti-Christian views of truth.  Smith says he is “the whipping boy of middlebrow Christian intellectuals and analytic philosophers everywhere, the byword for everything that is wrong with postmodernism and academia. The Rorty scare is like the red menace, giving license to philosophical McCarthyism…”

Rorty, I learned, studied Wittgenstein, and Brandom studied under Rorty.

They are perfect case studies, and the three books Smith explicates are vital, classic texts of contemporary postmodernism.

And, by the way, he thinks that Christians should be concerned about their anti-Christian orientation. He is not going to suggest that their views are somehow safe or softly Christian.  No, not at all.

Just to be clear about his intent, though, allow me to quote him again:

As I’ve already hinted, I actually think there is something for us to learn from these philosophers — that pragmatism can be a catalyst for Christians to remember theological convictions that we have forgotten in modernity.  Granted none of these pragmatists have any interest in defending orthodox Christianity; I won’t pretend  otherwise. But I will suggest that taking them seriously might actually be an impetus for us to recover a more orthodox Christian faith — a faith more catholic than the modernist faith of their evangelical despisers.

Jamie Smith puts the matter much better than I can, and he is a good guide and clear writer, even in this complicated material. I truly believe that it is worth buying this book for the first 37 pages, the introduction and first chapter. (Ahh, and the brief epilogue “How To Be A Conservative Relativist.”) 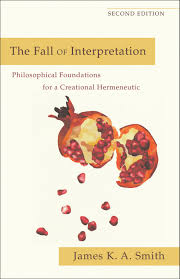 always “in relation” (i.e. relative) and contingent. This brilliant and — it seems to me commonsensical — line of thinking draws a bit on Smith’s splendid first book, The Fall of Interpretation  (BakerAcademic; $25.00) which develops a “creational hermeneutic” and suggests, from Augustine, that all humans always “see through a glass darkly” due to our own God-given finitude. To deny the human act of interpretation (or to think it is a liability mostly from the fall) is to fail to understand our own creaturehood.  Such (Enlightenment-based?) calls for “Absolute Truth” that we can know with confidence sounds like hubris to my ears but also like a peculiar blend of gnosticism and idolatry.

Smith takes this up in the first chapter by exploring the concerns about relativism that are from exemplary scholars he otherwise respects, Christian intellectuals who can be good conversation partners, but who still fail to appreciate the insights gleaned from the pragmatists/relativists.  He discusses and critiques the work of brilliant sociologisti Christian Smith and the heavy-weight philosopher Alvin Plantinga.  I suspect you know those two names, and the chapter in which Jamie disagrees with their thinking on this is exceptional.  I recommend reading it if you care at all about what we call a Christian worldview, about faithful thinking, about cultural engagement. Yes, it is a bit tedious for those of us not trained in philosophy, but it is worth working on.

nd here is what is also fun: for each chapter, Smith offers a film, and discusses it nicely, to compliment the issues raised in each chapter.  This is a great teaching device and does showcase some of the real-world implications of this rather obtuse stuff. The chapter “It Depends” reflects on the indie film starring Michelle Williams about a girl and her dog, Wendy and Lucy.  For his look at Wittgenstein’s famous phrase “meaning is use” (in the chapter “Community as Context”) Smith offers a review of the eccentric and thoroughly enjoyable Lars and the Real Girl.  Chapter three is brought into focus by the Academy Award-winning Crazy Heart and the songs sung in it by Jeff Bridges.  Philippe Claudell’s very French film, I’ve Loved You So Long expresses more (pun i

ntended) about Brandom’s theory of expressivism in a chapter called “Reasons to Believe: Making Faith Explicit.”

The provocative and important last chapter doesn’t have a film to go with it (drats!) but it does have a star — George Lindbeck, who coined the term “post-liberalism” and wrote the very significant The Nature of Doctrine (Westminster/John Knox; $30.00.) If you don’t know much about the so-called Yale School, or Lindbeck’s work, this relatively short chapter is a great introduction.  Smith playfully calls his modest work “the long-lost prequel to Lindbeck’s book.” He hopes it can be received as “a philosophical springboard for understanding post-liberalism, which is, in many ways, an embodiment of the religious and theological implications of pragmatism.”

g the philosophical framework to account for the relationship between worship and doctrine that I sketch out in my Cultural Liturgies project, Desiring the Kingdom and Imagining the Kingdom (both BakerAcademic; $22.95.)

In fact, this whole book is a great introduction — Smith notes that it is not exhaustive, but merely a “foray” — to so much intellectually rich content, stuff that educated people should know. I have not studied these philosophers previously at all, and never even heard of Brandom, but I know I will follow the broader cultural conversation better now that I’ve spent some time with Whose Afraid of… and can use more wisely words like “contingency” without embarrassment.  Much of this will be most useful for the academic and nearly every page will thrill the philosophy student, but some of it is very, very rewarding even for the general reader.

All of us can benefit from its key insight, summarized by Stanley Hauerwas, who writes on the back “Smith helps us see that Christian theologians have betrayed their best insights by being afraid of relativism. He helps us see that the challenge is not relativism itself but rather the epistemological concerns that produced relativism.”

Who’s Afraid of Relativism is, as Institute for Christian Studies professor Dr. Ronald Kuipers suggests, not just “a remarkable book” but “a beautiful risk.” I suspect it will be criticized by some, even some who will not read it.  Still, a beautiful risk it is. If it can help us not only understand the times in which we live, but understand ourselves more appropriately — as dependent and fallible creatures — then God will be pleased, and God’s people will be well served.

It may be a risk for me as a bookseller to ask you to trust me on this (as I will again in the next post when I tell you about Smith’s other brand new book, which is also very important.) But it is beautiful.  Thanks for reading this far, and thanks caring.