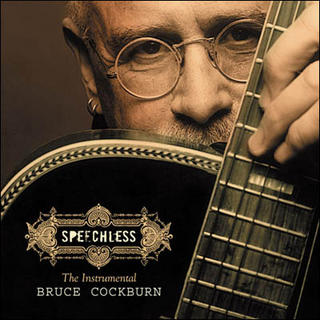 Aw right, I’ve been wanting to write this. This is it. Years ago (like maybe the early to mid-80’s) I made a mix tape, recording off my records the instrumental pieces of various Bruce Cockburn albums. I have often said that if Jackson Browne got me through the 70’s it was Cockburn that most helped us survive the ’80’s. (And, VOL and Bill Mallonee surely was one of the most poignant and helpful soundtracks to the 90’s. And U2. But don’t get me started on that tangent…)
SO: Cockburn’s little cassette of quiet and charming and vivid and remarkable instrumentals has long been lost—and I don’t know how to do the CD-burning thing, so I’ve not made another. And with the breathtakingly good instrumentals on his last couple, I have been wishing for this kind of recording, again, passionately. When I heard that just such a project was in the works, a CD collecting some of Bruce’s best instrumentals, and a few new ones, I was in six-string heaven.
Speechless: The Instrumental Bruce Cockburn(True North/Rounder Records) has a cool cover, some wonderfully evocative full-color photography on the inside and some spare liner notes. Colin Linden helped with some of the middle-period ones (and T-Bone, of course.) Mr. Linden, whose solo work I listen to often, did production work with Bruce on the three new cuts, too, that grace this collection.
How to describe Cockburn’s rare talents that put him in the highest level of renown instrumentalists today? I can’t even begin.
Here are the opening words of a review of one of Cockburn’s legendary live shows (from a few years back) on the Rounder Record website, written by one of the chief music critics of our time, The New York Times, Jon Pareles. It stuck me as a nice way to introduce this brand new instrumental release:

The hardest-working right thumb in show business may belong to Bruce Cockburn, the Canadian songwriter, who played a sold-out solo show at the Bottom Line on Saturday night. With quiet virtuosity, on his acoustic guitar, Mr. Cockburn materializes chords and modal filigrees while his thumb provides the music’s pulse and its foundation. It is at once a deep Celtic drone, a drumbeat and the throb of a vigilant conscience.

If you are a fan of Windham Hill or Narada type guitar noodling, Speechless will blow you away. If you like a more melodic and song-driven approach, this, too, is spectacular. If you don’t know Cockburn’s folk-rock-jazz-tinged-world-music- spiritual-political-songwriting-and-gritty- beautiful vocal work, you should know he is an amazing worker with words and a world renowned person of faith. He has endured making meaningful and gutsy and dark and glorious, mature pop music for decades, often reporting not only from the inner regions of the human heart, but from the social landscape of a war-scarred and broken world. So you really should check his work out–we’ve got ’em all. But for now, please know of ourgreat joy in this collection of instrumental compositions that show-case truly one of the great guitar players around.
There is a pretty great Cockburn website that documents stuff Bruce has said about his many songs. It is fun to mess around and hear how he has introduced pieces on stage or has defended them in print. The Bruce Cockburn Project. I wouldn’t think it wasting time to scroll around that goldmine of a Cockburn resource.
Some of the absolutely richest reflections on Cockburn’s vision, though, can be found by visiting the website of my good friend, campus worker and author Brian Walsh. Spend some time reading any number of Brian’s provocative articles and Bible studies reproduced at this website, but, today, do click on some of his Bruce Cockburn essays and album reviews. Excellent, excellent stuff. Visit Walsh here.
Speechless: The Instrumental Bruce Cockburn Bruce Cockburn (True North & Rounder Records) 2005. $17.98 Order from us here.Order at this website link or send us an email saying you saw it here on the blog (don’t use the comment section for this, but send us a real email order) and we will give you a blog-site 20% off discount. Maybe that won’t leave you utterly speechless, but it should help.
Support the indie stores that have long supported the indie artists. Thanks.
For serious fans who may want to know, here are the songtitles and what albums they are lifted from. The place and time refer to when and where the song was actually recorded. The liner notes of the orginal album may tell you more of the circumstances of when he actually penned the song, which is sometimes quite fascinating. Enjoy.
1. Foxglove
Bruce Cockburn Guitar
Taken from the True North Album Night Vision
Toronto between February and May 1973
2. Train In The Rain
Bruce Cockburn Guitar
Taken from the True North Album Dart To The Heart
Bearsville NY, March 1993
3. Water Into Wine
Bruce Cockburn Guitar
Taken from the True North Album In The Falling Dark
Toronto between September and November 1976
4. Elegy
Bruce Cockburn Guitar
New recording *
Canada, June 2005
5. Mistress of Storms
Bruce Cockburn Guitar
Gary Burton Vibes
Taken from the True North Album The Charity Of Night
Toronto, Summer of 1996
6. Rouler Sa Bosse
Bruce Cockburn Guitar
Jack Zaza Clarinet
Taken from the True North Album Salt, Sun and Time
Toronto between May and August, 1974
7. Salt Sun and Time
Bruce Cockburn Guitar