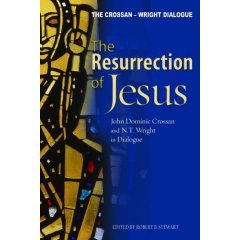 We sometimes joke in our shop that we have “something to offend everyone.” Well, this could raise the eyebrows of some, but we think it is an important and helpful book, one we are eager to promote. It is a collection of essays around the core pieces, which are the lectures give in a debate on the bodily resurrection between John Dominic Crossan and N.T. Wright. Readers of my reviews will know of our admiration for Tom Wright. His insistence not only on the orthodox and historic formulation of the resurrection, and his insight that this is the beginning of the new creation, is rich and necessary. I haven’t studied Crossan in depth (although I have looked at his recent book on Holy week that he did with Marcus Borg.) I am inclined to not waste time reading stuff which deconstructs the most essential of doctrines, and find such stuff to be harmful to the church. My people in the mainline have been there, done that.
Yet, The Resurrection of Jesus: John Dominic Crossan and N.T. Wright in Dialogue edited by Robert Stewart (Fortress $18.00) is a fascinating volume, and lays out very important conversations in a helpful manner. If the resurrection is central to Christian vitality and God-honoring fidelity as the church has traditionally said, then it is surely worth knowing why some believers want to reconstrue it and how to respond to that claim; it is important to know the lay of the land on this central doctrine and see how thoughtful and good folks debate it. You may not be clear in your own mind where to stand on this matter or you may have your mind and heart well rooted; either way, it is wise to know of this area of discourse and it is good to learn about the topic.
That the book is a dialogue is evident and fair. Most of the book isn’t by Wright or Crossan, though, but various authors—William Lane Craig or Craig Evans or Ted Peters or Alan Segal or Gary Habermas—add their evaluations of the discussion and help us highlight points of agreement and explore various implications. What the resurrection means is what is at stake, of course, and these popular and lively scholars give us serious stuff to think about.
After the Wright/Crossan dialogue chapter, several of these semi-scholarly pieces shed light on their discussion. Robert Stewart has a chapter “The Hermeneutics of Resurrection: How N.T. Wright and John Dominic Crossan Read the Resurrection Narratives.” Gary Habermas puts it in historical perspective in a helpful piece called “Mapping the Recent Trend toward Bodily Resurrection Appearances of Jesus in Light of Other Prominent Critical Positions” where he tells of his survey over recent years of over 2000 scholarly articles on this topic, and the trend he’s observed. R. Douglas Geivett has a chapter entitled “The Epistemology of Resurrection Belief” and the old debate about faith vs history is discussed throughout.
Some of you have covered this “long already” (as the Pennsylvania Dutch say.) Some may not need to know this much. But for some of us, this broader constellation of concerns—can you say Da-Vinci-Code?—will continue to be important and we will need to be skilled in graceful conversation about Biblical truth. This is one volume that covers some of this ground. It isn’t the final word, but it is a good discussion to follow. Happy Eastertide!