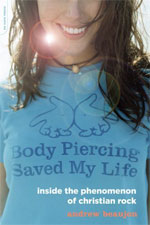 Yesterday in my post about the Purple Door Art & Music festival, I not only tried to give you a glimpse of the mayhem and dirt and crowds of these kinds of outdoor music events, but a bigger picture of the ministry opportunities, the celebration of a Kingdom vision of music and art, and how we play a role by offering thoughtful books that can serve as a foundation—a badly needed apologetic and strategic vision for this kind of counter-cultural music work, which should be rooted in solid theology and spiritual depth and aesthetic maturity. We celebrated the work of the sponsors, affirmed some of the undergound ministries that coalesce around these kinds of events, and gave a shout out to our space-mates and patron saints of the art gallery, Burnt Toast Vinyl, and explained how great it is that the founders of Purple Door include stuff like a lit magazine (The Hinge) and a juried art show. The kids have a great time who go there, we get to hang out and sell books, and, this year, I was asked to speak. I’ve done talks from one of the stages some years, but this time I did a full workshop on the arts, where I feverishly shared a whole bunch of theological and Biblical guidelines for thinking about cultural engagement, and ways to maintain a transforming “in the world but not of it” hope for impacting in normative ways the artistic subcultures we find ourselves in. Or don’t find ourselves in as the case may be. Messiah College friend and art major Ali Wunder did a great job bringing her practical experience to bear in our workshop (and she quoted the marvelous and rich Walking on Water, the sweet book on faith and art written by Madeline L’Engle.) Thanks Ali! 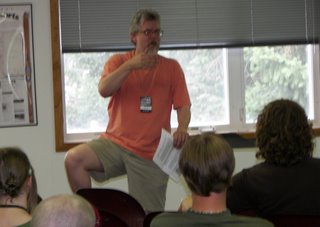 I’ll tell ya what: here comes a great, great deal. While supplies last (and I’ve got plenty) I will offer a free copy of the other great book on these themes, At the Crossroads: An Insider’s Look at the Past, Present and Future of Contemporary Christian Music written just a few years back, by Charlie Peacock, perhaps the most thoughtful guy working now within the industy. (Charlie, I might add, was nominated for a Grammy last year for his hip, and very exciting instrumental jazz recording, Love Press Ex-Curio.)
We’ve got some hardback copies of At the Crossroads that we will give away FREE if you buy Body Piercing Saved My Life. Charlie was at Purple Door two years ago, and I would guess that anyone who cares about music, the sorts of issues we try to raise here, who heard my PD talk on the high calling of the contemporary arts, or anybody who likes to think a bit about the relationship of Christianity and contemporary culture will benefit from Mr. Peacock’s wise insight. Read alongside the Body Piercing expose, and you’ve got quite a double-punch. Or as Dylan put it, a Shot O Love.

Just e-mail us at read@heartsandmindsbooks and tell us your address and how you want to pay. You know the drill from our website, we assume–you can pay with a cc (here or call it in) or we can just send along an invoice and you can pay later by check. Tell us that you heard of this special blog deal and get the free book.