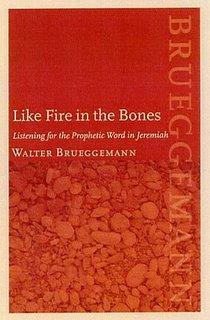 Our last few posts have been about resources for renewed Biblical study, some for beginners, some for college classrooms, some that have a special flavor. I can’t end this series of postings without an announcement of the brand new Walt Brueggemann book, Like Fire in the Bones: Listening for the Prophetic Word in Jeremiah (Fortress; $35.oo.) I know it is overly pricey—shame, shame on the publisher!— and we will announce a blog discount special below. But hear me out on this: Brueggemann is one of the foremost Biblical scholars of our generation, and a man who has nurtured and befriended me, personally. Jeremiah–the longest book of the Bible–may be one of the most important prophets for our day. As Brueggemann himself suggests, the way Jeremiah both warned about and lived through the disaster of the destruction of Jerusulem in 587 BCE is suggestive for how to think about America in our post 9/11 situation. (His important and very readable commentary on Jeremiah, published now in one paperback volume by Eerdmans, is wonderfully sub-titled Exile and Homecoming.) Of course he doesn’t explore this in a wooden or simplistic fashion; many of these collected pieces, in fact, were written in earlier decades. But the remarkable way in which the Bible scholar and the passionate preacher that is Dr. Brueggemann shifts back and forth from ancient text to contemporary contexts, makes him truly one of the more valuable leaders of the church today. That he is both respected in the most arcane circles of the guild of Hebrew studies and as a preacher in the mainline and emergent churches, should tell us something important. He cares for the most serious research into the text (and what nearly everyone who has written on it thinks) and he cares for Christian formation in the church.
Many readers of this blog and customers of Hearts & Minds will know of our evangelical commitments, and will be a bit suspicious (as we are) of any scholar who uses historical critical methods, who suggests that the Bible can be torn apart and even dismissed, all by evaulating the literary style or the speculations about orginal sources. Most of us know that the mainline churches have been virtually decimated over the last century by the extremes of this kind of overly-academic, modernist, critical reading.
Brueggemann may be one of the great examples of a scholar trained in the best (worst?) of this liberal tradition, who, especially in the more recent years of his career, has shifted to a style of interpretation that some may now call postmodern; for others of us, it sounds more evangelical. Technically, I suppose it is most indebted to Brevard Childs’ canoncial approach, and has been deeply appreciative of those who have shown how ideological bias has colored traditional readings (say, third world scholars, feminist or black scholars.) Because of this, he is one to read, one of our best, as he brings such a profound familiarity with the best of the critics and yet is able to circumvent their unhelpful directions, when necessary. (Here is a fair on-line article about his perspective.) His lectures and sermons have been–without a doubt–some of the best Bible teaching I have ever heard, bringing together notable and erudite discussion of the literature, and powerful, edifying— and challanging Scriptural preaching of the gospel.
These essays, collected over a lifetime of his important work in Jeremiah, show some of his most detailed study of the prophet and the text; it also includes some of his most passionate application of the prophetic imagination to the cultural context of our day.
The final chapter is an extended interview on the task of the prophet in the Bible, and the calling to be prophetic today. It is plainspoken and powerful. I know I say this too often, but I sincerely believe that this one chapter alone is well worth the price of the entire book, and investment something that we should ponder for a lifetime. But then so is chapter 14, “Prophets and Historymakers” and, for anybody that cares about the state of the art of Jeremiah studies, so are the first few chapters. We are gleeful that this book is now here, and cheered that such serious study of pain, lament, politics and hope, actually exists on printed pages. The beautiful cover compliments the other two in the series, indicating this is the third in a triad of hardcovers. We highly recommend it.

BLOG SPECIAL
25% OFF
email (read@heartsandmindsbooks.com) or call 717.246.3333
Mention this announcement to get the sale price.