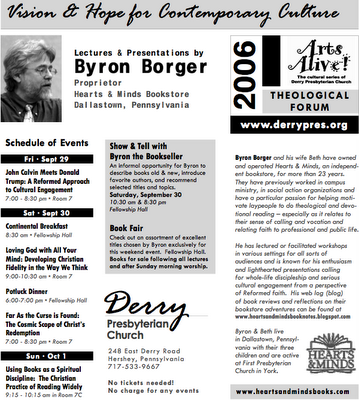 Well, this may not have come out as clearly as I would have wished, but the Derry Presbyterian Church in sweet-smelling Hershey PA have done some remarkable stuff over the years, and this is their flyer about this weekend’s event. That I am lecturing there this weekend (four big ones; two book talks, too! Weeeeee!) is a bit perplexing; they have previously brought in extraordinary authors and famous people. We usually get to sell books at their Forum, so it is stunning to be asked to play a larger role this year. So there you have it: God, or at least Presbyterians, works in mysterious ways.
Still, I am very excited to be with them and have been looking forward to is; as you may guess, I’m eager to unload more visionary “Christ transforms culture” stuff than they may ever wish. (They did host Tom Sine once, though, and he’s one of the only guys around that talks faster than I do.) Please pray for us all, that we will have conversations that bear fruit, for God’s glory and our neighbors sake. As we work to bring restoration to the world around us, we must remind ourselves that it is so that people are loved, and God is glorified. Somehow, we trust that the books sold and the talks given and the discussions had will end up serving noble ends of theologically sound strategic thinking about lasting cultural influence. Thanks to friends old and new at Derry for inviting us. I’m packing the Borger Bookmobile tonight with more boxes than I guy like me should carry, loading up the van in the late-night rain. But I don’t mind— Chocholate-town, here we come!
PS: Of all the odd things to recommend for edifying reading on this, may I commend two eccentric selections. Go to Comment and read the tribute to a mentor of mine who died years ago (Hodgkins) who was an itinerent philospher who had studied under Dutch Kuyperian scholar, Herman Dooyeweerd. Dr. Pete Steen was a flamboyant campus minister in the 1970’s helping students care about the Lordship of Christ over all of life, particularly the flow of ideas in Western culture, and I was asked to write about him for Comment. I doubt if his name will come up in the Derry presentaitons, but I wouldn’t be there if it were not for his influences so many years ago.
Secondly, in last month’s Books & Culture there is a long story on the relationship between Reinhold Niebuhr and Billy Graham. The narrative unfolds mostly in the 50’s, when Niebuhr publically and regularly offered critique to Graham’s truncated and personalisitic gospel, even in public magazines like Life. Billy read most of what N wrote and their interviews about each other are remarkable social history and important theological reflections. Interestingly, Graham thanked N for his work and for helping him see the social/structural aspects of human sinfulness.
And, while I’m at it, read John Wilson’s very astute critique of Randal Balmer’s book on the evangelical right, which also appeared in Books & Culture. These evangelical-mainline disucssions about the content of our doctrine and the shape of our public witness is of great interest to me. That many—including Randy, who Wilson thinks ought to know better–nearly demonize the evangelical tradition and caricatures their views, is very unfortuante.