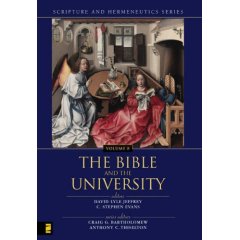 The Scripture & Hermeneutics Series which Zondervan has valiantly been releasing over the past several years, has published a new volume that I’ve been wanting to write about.  Granted, the academic level and specific topics make this a touch eccentric; this time of year I should be plugging the latest best sellers.  There are some swell, ordinary books I’d love to promote, and hope that you’ll consider ordering here for any of your bookish gift-giving needs.  But this is too good to wait any longer.  Who knows, maybe some BookNotes readers will want to put it on their little list to Santa.

The Bible and the University edited by David Lyle Jeffrey & C. Stephen Evans (Zondervan; $34.95) is volume 8 in this series, the last, by the way, of an on-going international, interdisciplinary, academic project.  The important series has been overseen by Craig G. Bartholomew and Anthony C.Thiselton, if that gives you a sense of the solid and heady tone.  We’ve especially enjoyed some of our neo-Calvinist friends who end up in some of them—Al Wolters, for instance, a scholar from whom I am always on the lookout for new work, or Eastern University’s Ray Van Leeuwen, whose piece on language in the second volume is brilliant, although the series is happily quite ecumenical.  Joel Green from Asbury (United Methodist), for instance, co-edited the Luke volume and Mary Healy, a lay Roman Catholic woman, co-edited several, including the one called Biblical Theology and Biblical Interpretation.  Brevard Childs attended one of their events and wrote a chapter, and Walt Bruggemann has contributed. Christopher Seitz has worked with them and, of course, Kevin VanHoozer.  N.T. Wright, natch. And some surprising folk: Jean Vanier?  Alvin Plantinga?  The Center for Public Justice’s James Skillen has a very important critique of Richard Hays in volume 3, which was a remarkable interaction with the political theology of Oliver O’Donovan. That one is entitled A Royal Priesthood? The Use of the Bible Ethically and Politically and was packed with insightful, serious essays—good for this next year, obviously.   Last year volume 6 came out, which was a fascinating collection called Reading Luke: Interpretation, Reflection, Formation; earlier this year volume 7 released, a gathering of pieces on the notion of the canon, and how the overview of the canon helps us do interpretation. (Tremper Longman on wisdom, for instance, and Gordon Wenham on Psalm, all seen within the context of the history of redemption.)   Great, diverse authors, doing Very Important Work.

The Bible and the University has gotten endorsements from folks as diverse as Stanley Hauerwas, Richard John Neuhaus, and Mark A. Noll.  There’s some heavy hitting going on just on the back-jacket blurbs!   Mark Noll concludes his rave review, noting, “”Â¦.  as the final volume in a very important series, this book offers an unusually compelling wealth of information, assessment, encouragement, and admonition both for a better understanding of Scripture and for its deployment in the contemporary world.”Â  Any serious book that helps that—understanding and deploying the Bible— ought to be on our radar screens, eh?  Know any libraries, at least, you could donate this, or others in the series, to?  Any church resource centers?  Campus ministry offices?  To struggle with how the Bible has been understood, used, ignored or honored in American higher education is itself quite a story, and some of these dense chapters are very, very interesting.

Take, for instance, the opening salvo, a lucid introduction by David Lyle Jeffrey’s exploring how authority works, being shaped by wisdom and Book.  Later, this theme is somewhat picked up by Dallas Willard on his excellent, philosophical piece on knowing, and the role of the Bible in knowledge.  Al Wolters has a splendid chapter No Longer Queen: The Theological Disciplines and Her Sisters.  Glen Olson has a chapter called The Spiritual Sense(s) Today and Robert Roberts–an excellent scholar and deeply thoughtful spiritual writer—has a chapter on psychology and the New Testament.  Although it is serious scholarship, David I. Smith has an extraordinary chapter that teachers should read, called Biblical Imagery and Educational Imagination: Comenius and the Garden of Delight. Smith is a Brit who co-wrote a fabulous book on the Biblical themes of hospitality to strangers as a key insight for learning about foreign language study.  We carry his weighty The Role of the Bible in Education, too, which we import from the Kuyers Institute in England.  Good stuff to find this great piece here.

Other chapters are quite detailed: Scott Hahn has a piece on the exegesis of Pope Benedict, as a way into the critique of historical criticism, offering up a thoughtful ecclesial locus as an alternative for faithful interpretation.
Byron Johnson directs a serious research program at Baylor, and serves as a Fellow of the Witherspoon Institute at Princeton.  He argues for the need for empirical data on American Biblical literacy, and explores the question what difference all this makes; his work with at-risk youth makes his appeal especially poignant.  Lawyers, legal scholars, law students or professors know the name Robert F. Cochran, Jr., and here he writes a fabulous overview of questions of the Bible and Biblical authority in his approach to jurisprudence and legal studies.  Similarly, Roger Lundin is a major figure in the studies of literature, and the historical development of American lit.  His chapter, As If God Were Dead looks at questions of Biblical authority in Emerson, Melville and Emily Dickinson. Wow.

And there are others, including a powerful closing piece by C. Stephen Evans.  If you are familiar with, say, Books and Culture, or the Christian Scholars Review, you will know many of these contributors.  To find them in one volume makes for a great way to dip into the various intellectual leaders of evangelicalism; to see them explore how the Bible has or hasn’t been used in the university—the breeding-ground for intelligentsia and societal gate-keepers of Western culture—is certainly urgent for any of us that long for long-term, radical social reformation. That they explore this not only for the sake of the university, or for gospel impact in the culture, but as a part of this multi-book project to help us interpret wisely, to read well, the think faithfully about God’s word, well, maybe this is the sort of book we should be promoting this Christmas.

Click here to get to the project’s page, and by clicking on the covers you can find the chapters and authors for each volume.  What a stellar gathering of some of the most thoughtful Biblical scholars of our time. We stock them all.