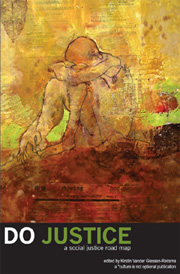 We received today a fabulous little book that I’ve got to tell you about.  We are the very first bookstore to have it, and there is a large, interesting backstory.  Let me go way back, so you appreciate how this book came to Hearts & Minds and why I think you should know about it.  The story behind the book is half the fun, and instructive.

Several years ago, some mutual friends introduced me–at the CCOs spectacular Jubilee conference in Pittsburgh—to a young couple, Rob & Kirstin Vander Giessen-Reitsma.  They were dressed bohemian and casual—thriftshop chic, which, for them, wasn’t chic, just real.  On the young end of Gen X, they were very cool— writers, artistic, they loved novels and came from Dordt College.  Dordt taught that Christians should “think Christianly”Â across the curriculum, which means that ordinary folks should know something about an integrating Christian philosophy, and then form counter-cultural communities to embody the practices that such a lived out world-and-life view would engender.  They seemed energetic and hopeful, starting up a network of folks to dream and write and publish and conspire to make a difference, living out a “subversive”Â  reformational vision, faithful in the ordinary and beyond (think Brian Walsh’s brief but powerful Subversive Christianity, brought to fuller flower in Colossians Remixed.)

Further, they had an obvious fluency and interest in not only Calvinist theology and reformational philosophy, but had significant interests in social justice and peacemaking.  Rob, in fact, was taking classes at Goshen, a Mennonite college, in peace and conflict studies.  Wow:  these guys read my heroes–Goudzewaard, Walsh, Middleton, Keesmaat, Seerveld, Mouw, Plantinga, Garber, and knew of our friends at the distinctive grad school, the Institute for Christian Studies in Toronto.  And, Rob was studying John Howard Yoder and pacifism and wondered out loud how to relate neo-Calvinist worldview thinking, global justice concerns (like, say, Bread for the World and Sojourners) and the cross-centered non-violence taught by the Anabaptist, and the resistance communities enflamed by the Berrigans, Chad Myers, and others (who later would go on to find young expression in our mutual friend, Shane Claiborne.)  Goudzewaard, the Dutch economist?  Seerveld, the aesthetic philosopher and teacher about Christian ways to work?  And peacemaking studies at with the Anabaptists?  Can you see why I was excited?  Not too many people read R.C. Sproul and Jacque Ellul, you know, know the Heidelberg Catechism and the U.N. Charter on Human Rights, take seriously Wendell Berry’s fiction and the art history of Rookmaker.

They started a fair trade store, and eventually took a job at Calvin College with my best friend mentoring students in cultural discernment and bringing in bands and artists and film, through its Student Activities office. (Did I mention that Rob & Kirstin are pop culture gurus, as well?)  But first, they followed through in their publishing dream, creating a networking organization, *cino (culture is not optional) and a fantastic and very interactive on-line zine, called  catapult, which features memoir, Scriptural reflections, photography, movie reviews and the occasional Hearts & Minds bibliography.  It is put together mostly by young turks, many with connections to the Dutch Reformed faith community, but their activism around fair trade issues and anti-globalization stuff has brought even wider ecumenical connections.  Kirstin does the lioness’ share of the editing, I believe, and her graceful and thoughtful style gives it a “lit mag”Â quality.  I once described it as a mash-up of Orion and Paste and Pro Rege; a hipster cousin to Comment or Critique.  Making sense why we love these folks?  (For those a touch confused by all the name-dropping, many of our readers know that we have friends and acquaintances that write for each of these important journals.  Google ’em if your so inclined, or if you want to know more of our influences here at the shop.)

Here is where it gets even better: *cino puts out a quarterly (hard-copy) journal, a very handsome piece called The Road Journal.  And, occasionally, they publish thematic pieces called Road Maps, the early ones nicely designed, but stapled, around topics.  Well—-here’s the announcement this is all leading up to: the Road Maps are henceforth a new series of little paperback books.  Small in size, very handsome in appearance, they gather previously published essays and interviews and poems and bibliographies and add some other resources and discussion starters and, well, we just got the new one and I’m giddy.  It is called Do Justice: A Social Justice Road Map, is 140 pages, and sells for just $5.95.  Oh yeah, and I have a bibliography in there, annotated like I do here, designed for those interested in globalization, Christian perspectives on trade and aid issues, third-world development and the global economy.

Do Justice: A Social Justice Road Map edited by Kirstin Vander Giessen-Reitsma has a very artistic cover, a spine, an isbn (yeah, I know, I’m a book geek, so that matters) and an accompanying website, for further interaction.  It may be a clichÃƒÂ© to call this postmodern, but there is something that makes sense, these days, to this kind of odd thing: a website for interaction and participation, the sharing of stories, the offering of support and resources, based on a book, that emerges out of a e-zine community. (Their website, by the way, has the table of contents and authors.) That this was made available this weekend at two conferences—a student event on international development, hosted by Calvin College, and sold at our booktable at the first of the string of Everything Must Change gatherings with Brian McLaren and his book of that name, is indicative of the way a small book can get into the hands of those who are struggling towards big things, and how just such a book–small, earnest, laden with ordinary folks telling their ordinary stories—can be part of God’s plan for the advancement of His Kingdom.

We humbly submit that the release of this, the first of the *cino Road Map books, is a great, great signpost pointing us in the right direction.  McLaren is right: “everything must change.”Â  Perhaps one of the things that can change, is how we do publishing, how we circulate resources, how we tell stories that are real, small, local, faithful.

We have this book in stock, and you can buy it from us.  It sells for $5.95.  If you order it, we will pay the freight to ship it to you, so that saves you a bit.  We would be proud to say we played a small part helping get the word out about this inter-active on-line community, their zines and journals, and, this premier new line of books, the *cino Road Maps.

3 thoughts on “Do Justice: a new *cino Road Map”