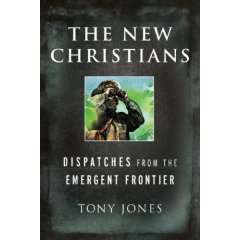 I’ve posted one of my long columns at the website’s “review articles” page, the one for March.  It starts with a link to a fun and helpful little piece in Publisher’s Weekly where the writer wonders if Christian publishers, in their desire to jump on the emergent bandwagon, will so over-use the term that it will become meaningless, co-opted.  You can visit that good essay here.

My column, though, goes on for pages sharing my interest in theological dialog and cultural reformation, telling how the North American students of Dutch Calvinist philosopher Herman Dooyeweerd—a behind the scenes influence upon Francis Schaeffer, actually—taught many of us in the 70s to deconstruct the Enlightenment project and the alleged autonomy of Reason long before anyone heard of postmodernism, let alone the emerging theologies.

Ironically, being schooled in this conservative Protestant tradition which critiqued secularized rationalism, and which honored honest questions, and which insisted upon robust, Biblically-guided cultural involvement, has made me more open to the emergent questions, not less.  I know some of our readers and friends worry about this, so I make my case, sharing how we’ve come to appreciate their basic impulse and publishing agenda.  I tell about some of my favorite books that set me up for this recent firestorm of new authors, hip book imprints, e-zines, clever ministries and the missional call to reinvent faith in ways that are different than middle American Christianity as we know it.

I hope my column explains our eagerness and concerns for the emergent conversation, lets you in on more of our past journey, and alerts you to some of the recent history of the emergent movement by highlighting some of the most important books in this field over the past five years or so.  The best new book that tells the story of the leaders of the new movement is doubtlessly the page-turning delight The New Christians: Dispatches From the Emergent Frontier by Tony Jones (Jossey-Bass; $22.95.) Jones is doubtlessly the one to tell this story, currently the coordinator for the Emergent Village. It has garnered rave, rave reviews from everybody from McLaren to Phyllis Tickle to Mark Oestreicher.  If my rambling whets your appetite, read Jones next, and then some of the other books I cite.  If my rambling turns you off, forget it, and read Jones.  And, wherever you are, join the conversation!