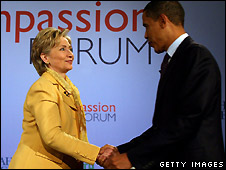 A number of friends saw my daughter and I on CNN, sitting in the VIP section at the Compassion Forum hosted by Messiah College on Sunday night.  As you most likely know, the Faith in Public Life folks—we know and respect nearly half their inter-faith board—were joined by the ONE campaign, Oxfam and a few other groups wanting to ask questions about faith and public policy sponsored a discussion with Senators Obama and Clinton (John McCain chose not to attend.)  They each talked about their faith journey, how they’ve experienced and describe God’s presence, and how their sense of Christian social principles might guide them as they confront incredibly complex and urgent social issues such as AIDS, peacemaking, poverty, torture, creation-care and abortion.  The talk was earnest, it seemed to me, and the moderators—CNN’s Campbell Brown, and Newsweek’s Jon Meacham—did an admirable job asking questions in fair and candid ways.  Other previously prepared questioners, representing Jews, Muslims and others, were in the audience (we were happy to see some of our acquaintances, folks like Jim Wallis of Sojourners, Lisa Sharon Harper, former IVCF staff friend, and now Director of New York Faith & Justice, the always-interesting NAE policy guy, Richard Cizik and teacher and author David Gushee.)

Marissa and I enjoyed watching how a TV show is produced, and the opening remarks, music and prayers from the generous hosts at Messiah were inspiring.  Of course the conversation could have gone in other directions, and it is clear that there was a progressive bias to most of the questioning. (Family Research Council leader Tony Perkins was invited and never replied; he later complained that he wasn’t involved.)  I enjoyed meeting new folks, authors, think-tank wonks, and policy activists, Republicans, Democrats, people from various faith traditions. Next to me was a sharp staffer from a Washington agency that is working on “third way”Â common ground strategies—just hearing about these different groups as projects made being there a delight.

I kept thinking of the writing I’ve done this season on books like Ron Sider’s Scandal of Evangelical Politics (Baker; $15.99)–I hope you read my review in February’s website column—and how important it is to have this kind of consistent and comprehensive Christian framework for thinking coherently about a “faith-based”Â orientation to our citizenship duties and the role government.  The candidates are good and thoughtful people, I think, and they each have had church involvement over the years, but I suggest that if you read a few popular level books of the sort I’ve described in that column, you may have a more integrated and wise perspective than half the folks who showed up for the Forum.  It is easy these days to critique the hard Christian right; the last year or two saw way too many repetitive and often mean-spirited left-leaning diatribes against conservatives, books that too often trafficked in the same sorts of one-sidedness and glib overstatement that they criticized  on the other side.  Yuck.

We hope to promote books that will engender deeper conversations among faith-driven citizens, who are seeking a true alternative to left and right, rooted in a radical Christian worldview. It is the sort of perspective documented in David Gushee’s great new book, The Future of Faith in American Politics: The Public Witness of the Evangelical Center (Baylor University Press; $I24.95.)  I’ve often mentioned David Koyzis smart work, Political Visions & Illusions: A Survey and Christian Critique of Contemporary Ideologies  (IVP: $20) and it would be well worth working through this balanced and perceptive history of the ideologies that have shaped American political discourse in this season of election-mania.  Do we even know what words like “liberal”Â or “conservative”Â or “progressive”Â mean, or where they’ve come from?  I know that political philosophy isn’t for everyone, but for anyone who is feeling called to enter serious civic discussions or be involved in campaign work, I couldn’t recommend a serious book more urgently.

And, enjoy this: I often appreciate the great reviews over at The Discerning Reader and their interview, here, with Os Guinness, around the themes of his new book, The Case for Civility and Why Our Future Depends on It (HarperOne; $23.95) is stellar.  Congratulations to Tim Challis for asking good questions and to Os for once again speaking clearly and significantly into the issues of the day.  I really hope you read the interview.

At the Compassion Forum, I spoke to a few activists, journalists, and scholars and I had the opportunity to bring up

Dr. Guinness’ urgently needed book in no less than three different conversations.  Clearly nonpartisan, The Case for Civility is what I sometimes call a foundational text.  That is, he is framing conversation in ways that are basic, reflecting on “first things.”Â  I hope you print out this interview and, if you know anyone who finds it helpful, that they will spread the word about this profound, foundational study.  We explained our appreciation for it in that same monthly column where I reviewed Sider’s book, by the way, making us one of the first sites to comment upon it–although Challis’s Discerning Reader review is much better.  I wish we could sell a bunch, helping not only make the case for civility, but shaping a movement of those who care as deeply about American survival as does her generous critic, Dr. G

Watch CNN archieved video of the Compassion Forum here and various questioners from the Faith in Public Life website, here.  You can read transcripts of the event here. Messiah College has a great slideshow, from several days before up through the big evening, here.