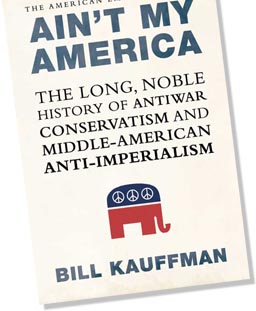 Stegall—a year or so ago.  Bill Kauffman’s new one is called Ain’t My America: The Long, Noble History of Antiwar Conservatism and Middle-American Anti-Imperialism (Metropolitian Books; $25.)  As the title implies, it tells the tale of the a movement and tradition, a longstanding tradition, that most of us simply haven’t heard of.  In what few American history classes we’ve had and in the typical civics lessons we’ve learned, and even in the somewhat sophisticated PBS current affairs shows we watch, we are lead to believe that conservatives are hawks and liberals are doves. The cultural picture, nearly iconic, of the free-lovin’ 60s counter-cultural peaceniks opposing the gray-suited businessmen of the military-minded technocracy only reinforces this simplistic and often wrong-headed perspective.  From the earliest days of our country, there were true patriots—some of the Founding Fathers, for crying out loud, who warned against foreign entanglements; today  there is serious debate and voices against the Bush administrations Iraqi war have been raging on the political right.  Conservatives have a notable history, if one can take note of it, of being against foreign wars.  Bill Kauffman, one who finds his joyful stand on his own small town front porch as he supports his local soft ball team and cares conservatively for the historic preservation of his upstate New York region, helps us take very detailed note.  Who knew?

Two other books of his that I’ve read, and thoroughly enjoyed, were full of historical arcana, interesting detail, and little known facts about middle American protesters against greed, big business and the ideologies of “bigger is better” progress;  the stories Kauffman tells are not about Wobblies, red diaper babies or 60s love children, let alone modern day lefties sympathetic to Chomsky or Obama.  No, these are rural folks, often, populists and isolationists who care about their traditional values in ways that neo-con “family values” advocates seem not to have a clue.  (His powerful and sad chapter about how the military damages families is important and yet would probably earn him scowls from Dr. Dobson for not being pro-Pentagon.)  He takes us on a ride across the decades, from Herbert Hoover to Wendell Berry, from James Madison to Mark Hatfield, and on to dozens of  (almost all unheard of) governors, pundits, poets, congressmen, and preachers who throughout our history have spoken up loudly against war and an expanding American empire.  Occasionally, he tells of liberal, if politically Democrat, leaders such as George McGovern, who had great sympathies for his upper mid-Western folk traditions, who at heart held the most agrarian of visions, and seemed a wholesome blend of liberal pacifistic politics rooted in old-school Americana values.  His admiration for these leaders and their “outside the beltway” integrity, is sincere and very well informed.

As Kauffman colorfully writes about this colorful array of peacenik farmers and social justice cranks who wrote poetry and stood against Bigness of all sorts, I’m struck by how different classical old-school conservative attitudes and values and principles are from what passes  as “conservative” nowadays on the political right.  It would be very helpful for our political discourse these days to remind ourselves that neo-conservatism with it’s idolatry of the free market as the answer to all social concerns, is a far cry from the profound writers of the classical “paleo” cons or the older Whigs.  (Think, say, of the difference between George Bush and, say, Russell Kirk;  the difference between The Weekly Standard’s “war-fighting Republican” Bill Kristol and anti-imperialists like Senator Robert Taft.)

These older brand of conservatives, unlike the subsidized bigwig neo-con think tanks, stand in the feisty patriotic linage of Daniel Webster and Benjamin Rush, of the Anti-Federalists of 1787, the critics of the War of 1812, the Mexican war, the Spanish-American War, the Louisiana Purchase, even, and worried about expanding our military reaches (opposing our violent involvements in places like the Philippines or Puerto Rico.)  Many of them, out of budgetary conservatism, opposed increased monies for wars like in Viet Nam (did you know there were conservatives who opposed the hawks who, in the early escalation of that war, recall, were Democrats!)  They opposed the Hawkish motivation for going to the moon, in part, because of the increased centralization of power, the bureaucratic mess, the militarization of technology and the reduction of human scale economies that occur in such modern schemes.  Was Lewis Mumford and his ilk a conservative or a liberal? (It was conservatives, Kauffman reminds us, that opposed the horrible social dislocation caused by the grand Inter-State Highway system, first promoted as a roadway for the Defense of the nation, and the equally bad social dislocation caused by urban renewal, all Big bad schemes of the utopian  left.)  Kauffman draws on deep sources, sorrowful of the loss of place, the derision of smallness, and highlights writers as interesting as G.K. Chesteron and the closing speech of President George Washington.

Ain’t My America is detailed American history, sort of the flip side of Howard Zinn’s colorful revisionist approach from the lefty side, which gives account of the poor and marginalized (the must-read A People’s History of America. Wow, it would be great to have Zinn & Kauffman on a panel together, since they both are presenting a dissenting historiography.) I had little idea that there were such men and poets as these in our grand American past.  One can be sorry for the brutality of Kit Carson;  we can lament the carnage of Gettysburg and Bull Run;  we can hang our head in shame at the bombings orchestrated by McNamara and Bush I.  But we can be proud of true patriots and good Americans and caring voices who dared to insist that wars of aggression and the politics of expansion and the ideology of growth are not healthy for families and our towns and our country.  Voices like Henry Blake Fuller and William Vaughn Moody and Moorfield Storey, names I had never heard, present a richer, fuller, and, it seems to me on this day, more truly American vision.  Kauffman  presents these writers and poets and pundits and politicos in all their quirky glory. 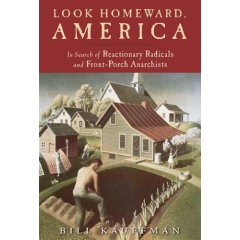 Kaufmann’s other books I’ve mentioned in these pages before, and are less systematic history.  Look Homeward America: In Search of Reactionary Radicals and Front-Porch Anarchists is a collection of vignettes, great stories of various small town folk who resist the secular left and religious right, who seem to live their lives in ways that call forth alternative, “third way” dreams and values. (In that volume he tells of Dorothy Day and contemporary novelist Carolyn Chute; of “American Gothic” painter Grant Wood and President Millard Fillmore.)  I loved those stories, each historically rich and well written.  For sheer enjoyment, I loved his tremendous, inspiring  memoir,  Dispatches from the Muckdog Gazette: A Mostly Affectionate Account of a Small Town’s Fight to Survive, an example of somebody who “wen
t far” to make something of himself, as the odd metaphors go, and eventually came home to his small town to root for the minor league ball team, the Muckdogs.  That one was truly wonderful, a tremendous memoir which is a must-read for those who appreciate James Howard Kunstler, say, or the rural novels of Wendell Berry.  He’s long-winded, which, in this setting, for those with ears to hear, is a good ‘ol compliment.  Sit back with some sweet tea or a cold beer and let this storyteller teach you some important civic lessons.  Let him tell you the long, noble history of antiwar conservatism and middle-American Anti-Imperialism.

Anti War Radio has a fascinating interview with him here.  Enjoy.

4 thoughts on “Ain’t My America by Bill Kauffman”