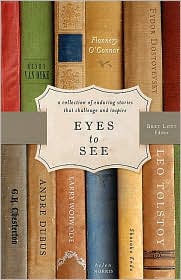 packaged and released by Thomas Nelson publishers, a renowned evangelical publisher, a stalwart in the often cheesy world of the “Christian Booksellers Association.”  So-called Christian fiction is often very nice, but the mainstream classic stuff still is often more mature, richer— aesthetically, and in terms of complexity and nuance.  That short story collection, Eyes To See, was compiled by popular author Bret Lott (himself a follower of Christ and New York Times bestselling fiction writer.)  It was a delight, and wonderful to see the CBA publisher taking that initiative. Many of the stories were brand new to me.  It was fun to send a few out to email customers.  Here is that brief blog post from last December.

It truly pleases us to announce that Mr. Lott has compiled a second collection, simply entitled Eyes to See Volume Two (Nelson; $22.99.) As you can see, although the pixels don’t do it justice, it has a similar dusk jacket making it truly lovely to behold.

And behold it you will, if you take a good look.  Eyes to See Volume Two has some classic authors—Charles Williams, Charles Dickens, G.K. Chesterton, Leo Tolstoy, all doing truly short stories from their large body of work.  Some are rather contemporary (John Updike’s “Pigeon Feathers” is the selection from that master and a piece from the newly released Yellow Leaves the contribution from Frederick Buechner.)  Several of the authors are new to me, but apparantly known in finer literary circles.  Gina Ochsner is a very contemporary writer,  Mary Wilkins Freeman wrote at the turn of the 1900s.  (She was, along with Edith Wharton, the first women writer to be inducted into the National Institute of Arts & Letters and has left a mark on American literature, especially exploring the stories of woman of faith.)  Sarah Orne Jewett is included, a name also well-known in the late 1800s as she befriended the likes of Twain, Henry James, Tennyson, Kipling, Willa Cather…

So, with older and newer tales, this is nearly 300 pages (in print that is not too tiny) of important, inspiring, meaningful entertainment.  It can capture your attention and, maybe, your heart.  There are some brief bios of the authors and a discussion guide in the back. We are happy to offer it to you, either with or without the first volume.  See the blog special pricing, below, a discount offered on either or both.

By the way, just a brief mention.  We have followed the life and work of Larry Woiwode, who had a contribution selected for the first Lott collection.  He was a seriously esteemed man of letters, an awarded writer, and, after a Christian conversion, he somewhat fell out of favor amongst the critics.  He wrote a memoir, a commentary on Acts and a couple of serious novels, has become the Poet Laureate of North Dakota, and continues doing pieces in prestigious journals.  Recently, there has been a buzz on his moving telling of his farm accident, a memoir entitled A Step From Death (Counterpoint; $24.00.)  Booklist calls him a “gripping storyteller as well as a ruminative thinker.”  This one, they say, is “darkly beautiful, lanced with portent and gratitude.”   And a lot of high-brow literary citations, references to poems and stories of doing his amazing work as writer, father, husband.  Anybody whose conversion story somehow involved the books of Calvin Seerveld, as I’m told Mr. Woiwode’s does, is my kind of author.  This literary telling of his brush with death on his organic farm in North Dakota and the memories these evoked are written nearly like a collection of short stories.

Lastly: over at the First Things blog a Junior Fellow, a serious young man with political and theological concerns, posts that he and many of his like-minded friends aren’t much into fiction.  A mentor there apparantly got him reading novels again, and he’s taken up Jane Austen. Yet, he wonders if others share his plight.   Another light-hearted post comes in recommending that he drop everything (including Austen) and read Master and Comander and the other 19 in that fine historical series about the British Navy. Hmmm. What would you tell a ambitious young adult, who loves non-fiction and reads widely, but isn’t quite so sure he enjoys novels so much.  Favorite recommendations anyone?