I was worried after the last post that some astute readers might be frustrated at me and my recommendations for not listing this one or that one, not naming this important work or that bestseller.  Of course we do not pretend to mention all the best books and my suggestions are fairly ad hoc…what we’re excited about, what just came in, curious and interesting stuff, titles that have garnered good reviews.  I’m often fearful of what folks will think, yet remain confident that I am called to highlight titles that seem useful, interesting and good.  Our store has tons of stuff, and new titles appear daily as if it’s Christmas—sans the nice wrapping, and, well, we have to pay for ’em all.  Our good employees are busy like elves, wrapping and unwrapping, opening and skimming, making lists (who would like this, who should we tell about that?)  We’re a busy little place and we love connecting books and people. Thanks for your interest in my lists and suggestions.

So, I will forge ahead, naming a few more books that could be read alongside the ones mentioned in the last post.  With no illusions of being comprehensive, these are titles that might be helpful.

Subverting Global Myths: Theology and the Public Issues Shaping Our World  Vinoth Ramachandra  (IVP Academic) $23.00   This may be one of the most important books of the year, and certainly a major contribution to deep understanding of our 21st century setting.  Ramachandra is a careful, erudite and thoughtful global Christian thinker and leader—he “stole the show” at the Urbana conference a few years ago.  You may recall his good study of world religions, Faiths in Conflict, or his profound (and, sadly, out of print) critique of contemporary idolatry, Gods That Fail.  This is a natural follow up, as he reflects upon and exposes various ideologies and idolatries as they are seen in contemporary discourse on the most pressing matters of our time.  Ramachandra has a B.S. (summa cum laude) and a Ph.D. in nuclear engineering from the University of London and, as an Anglican lay theologian is widely respected.  The back cover sports rave endorsements from international scholars as diverse as Peter Kuzmic (Croatia), Carver T. Yu (Hong Kong), Samuel Escobar (Spain) and Stanley Hauerwas (who lives in a colony of heaven, of course, but resides at Duke University.)  In fact, Hauerwas–who reads more than most scholars on the planet—says, “I have read few books from which I have learned more.”  Wow.  I agree with him when he says, “I really hope this book will have the impact it deserves.”

A quick story to illustrate the book’s profundity and wide appeal. You may recall that I reported last week about the thrill of selling books at the conference of the Christian Legal Society and the international Advocates International. (Please scroll back a few pages if you haven’t.)  Our good friend and their fearless leader, Sam Casey, Esq., told me that when he read Subverting Global Myths earlier this fall, he immediately had one promptly sent to one of the keynote speakers who would be addressing this cosmopolitan, international audience.  “Read this before you come,” Sam insisted.  Sam has one of the biggest hearts for the poor and oppressed, and is pro-life, culturally conservative, a Bible-believer, ready to defend life and law wherever it is under assault.  That he appreciated this stellar, scholarly critique of ideologies of the right and left, addressing issues as diverse as the myths and worldviews that shape conversations about multi-culturalism or the war on terror speaks not only to Sam’s broad reading, but to Vinoth Ramachandra’s profoundly Christian and deeply wise critical distance from all ideologies and partisan posturing.  He is an exceptional scholar, an important critic, and a voice which we need to hear.

In this work, VR provokes and challenges (and deconstructs) thinking about the war on terror,

the nature of human rights, economic globalization and such.  The chapter on science is nearly worth the price of the book, as is his chapter on post-colonialism.  His sober insights into the nature of religious violence (his experiences in the sub-continent, amidst the Tamil Tigers and such are extraordinary) is instructive, and his identity as a developing world evangelical positions him to speak a significant word of truth to our times.  Serious, thoughtful, careful and yet provocative–dare I say prophetic—my global lawyer friend Sam is right.  This is an urgent, must-read.

Making War in the Name of God Christopher Catherwood (Citadel) $14.95  I won’t say much

about this except to note that there is much nonsense being written in this field–as if people of faith have been the primary mass murderers of the 20th century, or as if all Muslims are either bloodthirsty terrorists or gentle peacemakers.  And, too often, those who are attentive to the Biblical call to robust Christian peacemaking are not very serious in their analysis of the problems faith can bring to the international table.  Catherwood has written widely in this field (Why Do The Nations Rage? is very helpful.) Catherwood is always worth reading, a thoughtful, British historian with a strong global experience, who takes a solid stand against simplistic secularization and sentimental religiosity alike.  He has studied Islamic violence and strikes a wise chord.  Unlike some these days, he is unflinching in his critique of both radical Islam, as well as he is in his critique of the violent expansion of Christendom, the crusades and such.  It may be good to know that Catherwood is a distinguished scholar at Cambridge, and is the son of Sir Frederick Catherwood (former VP of the European Parliament.)  He is the grandson of the famed 20th century British neo-Puritan preacher, Martin Lloyd Jones.

The Lost History of Christianity: The Thousand Year Golden Age of the Church in the Middle East, Africa and Asia—and How It Died  Philip Jenkins (HarperOne) $26.95  A new book by Phil Jenkins is always worth celebrating, and he has contributed much to our awareness of the nature of global religions. You should know of his award-winning, much-discussed, The Next Christendom where he shows the shifting center of Christianity towards the global south and Far East.  The fascinating follow-up, The New Faces of Christianity about how those in the global South use the Bible, is just now out in paperback.  This new one, The Long Histor
y… looks, as you might guess, at the early years of Christian-Muslim relationships, and how the church of Northern Africa and beyond got caught up in Gnostic heresies and such.  Truly a fascinating and provocative book, its research could provide a helpful backstory to the ongoing struggles for justice, sustained security, and other controversial tensions of the Middle East.   This is sure to be widely read and seriously debated…

Against the Grain: Christianity and Democracy, War and Peace George Weigel  (Crossroad) $24.95  Weigel is another important author as we allow our worldviews to be shaped into more global world views.  Harvard Prof. Mary Ann Glendon has written “In these marvelously readable essays, Weigel challenges reigning opinion on a wide range of issues, offers fresh insights drawn from the Catholic intellectual heritage, and opens up a conversation ‘with all partisans of the free and virtuous society, of whatever creed or no creed.'”  Jewish Studies scholar David Novak (U of T) calls Weigel “the most articulate and astute Catholic lay theologian and public intellectual at work in the English-speaking world today.”  Weigel is a Distinguished Scholar of the Ethics and Public Policy Center, and is known for his foundational natural law/just war theory approach, especially to foreign affairs.  (He has two extended chapters here on the just war theory as applied to the Iraq war.  Even those who oppose the war should study these important arguments.)  He has written widely, including the fabulous biography of Pope John Paul II, Witness to Hope. 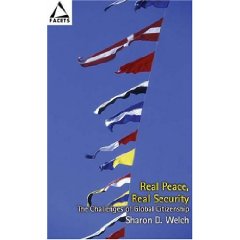 (Fortress) $7.00  This slim and brief volume is a remarkable example of the ways people of faith are making important contributions to the efforts to discern the contours of sustained security.  Drawing on sources as diverse as world religious thinkers to tactical analysis of world trouble spots, UN documents and think-tank scenarios, this small book offers chapters on the move from peacekeeping, peacemaking, and peacebuilding.  Drawing somewhat upon the vision and ethos of her 2004 work Beyond Empire, this small volume is an excellent introduction to some of the serious thinking that globally-aware citizens can promote, guiding us in ways to advocate for sustained and enduring, real security.  The forward is written by William F. Schulz, who some may know as the former Executive Director of Amnesty International, offering connections between human rights and peace.

Mark Vander Vennen, David Van Heemst  (Baker) $19.99  I’ve mentioned this several times, and thought I might as well note it again.  It came out about two years ago, is still getting advertised and cited, and is a book that we think may be one of the most important of the decade.  Dr. Goudzwaard is an economist who has served in the Dutch parliament, and Mark Vander Vennen has done excellent work in the Biblical basis for turning away from reliance on militarism.  David Van Heemst is a very popular political science professor at Olivet Nazarene University That Nobel Peace Prizewinner Desmond Tutu wrote the wonderful forward should illustrate how important this volume is.  I helped edit a tiny part of it, if that matters, and it would make my day if you ordered one.

We hope that you read something along these lines, staying abreast of the need to grapple with the biggest global issues, and how best to be agents of God’s hope, even as the empires rage..