A few days ago we had the privilege of selling books at a prestigious event sponsored by the Washington DC-based C.S. Lewis Institute a ministry that, in the spirit of Lewis, attends to nurturing the heart and mind, for the sake of both personal and cultural renewal. It was a conference with the intriguing title “The Fall of the Nations” and included Ken Boa reflecting on the fall of the Roman Empire, and Os Guinness speaking eloquently about what sorts of habits and attitudes might sustain our democracy.  Faith and freedom were built into the early days of our nation, the first nation created as an experiment in an idea.  Guinness has long been a sane and thoughtful voice honoring the depth of insight of the American Bill of Rights.  We are pleased to have our books represented at this Lewis-sponsored conference.  Thanks to Scott C. and others who volunteered to get our books on the road, set up, and peddled.  (Meanwhile, back at the proverbial ranch, Beth and I had store chores, a sweet 16-birthday party to run, complete with a jungle theme, my mother just out of the hospital, and books to haul elsewhere.)

The Ken Boa books were thrilling to promote as we’ve often recommended some of his fabulous books on spirituality, devotional life, apologetics, and such. His newest is a very useful and lovely hardcover (Regal; $24.99) called The 52 Greatest Stories in the Bible (co-written with John Alan Turner, with whom he wrote a book about parenting kids with the mind of Christ and a Christain moral imagination.) It explores these highlights of the grand story  It seems like a great idea, hanging out for a week in a given story, all to serve getting the big picture of the Bible in a year.)   His cultural analysis stuff was very well received (we sold his DVD on the comparisons between the fall of the Roman Empire and our own contemporary failings and fallings.)  Check out his very nifty website, blog here.  We have almost all of his books, so let us know if you want to order anything.

And Guinness.  Once again, we had the opportunity to promote his many books, especially featuring his brief book on truth and spin and hype, a timely and succinct call to navigate the postmodern landscape with Biblical fidelity.  Time for Truth: Living Free in a World of Lies, Hype and Spin (Baker; $12.99) is a great book to visit and re-visit and is a central portion of any evaluation of our times;  how do we think about truth?  I am not sure he and Ken fully agree on what may be symptoms and what may be causes of cultural decline, but I am sure they would both insist that we think through our very notions of truth, mostly rejecting Enlightenment rationalism on one hand and postmodern relativism on the other.  Knowing that last year the word “truthiness” was entered into our vocabulary, I am sure this little book is as valuable as ever.

For this “Fall of the Nations” gathering, though, we were particularly glad for Guinness’ wonderful book, serious and provocative, about political life, especially in America. I hope you know The Case for Civility: And Why Our Future Depends on It (HarperOne; $23.95) as we have been enthused about it and have tried to encourage folks to order it for months, now.  I wrote a long description of it last February in our review column, and I’ve noted its importance throughout the year.  Not only does Guinness invite us to fair-minded, robust, civil discourse, he offers a more philosophical strategy, a perspective and framework that is more than public politeness. The Case for Civility reminds us why we ought not seek a “religious public square” nor a “naked public square” but a “pluralistic” one, that permits fair treatment and voice of religious perspectives, but seeks to enshrine none.  More than a happy medium between the religious right and the secular left, it is truly a “third way” that builds into our public attitudes and approaches an awareness of the genius of the first amendment, and the need for religious liberty, the legitimacy of persuasion, the legal notions of “positive neutrality” when it comes to government treatment of faith-based institutions, the urgency of creating structures to nurture civic unity despite philosophical diversity.  If only our new President could articulate for our new era a way out of the culture wars, a way beyond the current impasses, by drawing on the insights of the founders and framers.  I have been thinking of key books that I wish the President-elect would read, and this would be one of them.  (Of course, Os’s The Call, one of my all time top few books, would be on that list, too, but I digress…)

Although I was not at the DC lectures, as we packed up the boxes to take, I could only imagine the things that would be alluded to, cited, named, or explained.  As Boa and Guinness together thought about a new reformation to turn back the darkness of these hard days, even in light of certain insights from the past, what books should we feature, what titles should we promote?  Of course we had Gibbon’s Rise & Fall of the Roman Empire there (the three volume Library of America hardbacks are very classy; the one-volume paperback quite nice, too) and the wonderful historical studies by Thomas Cahill, such as How the Irish Saved Civilization which struck me as particularly approppos.  (I suppose it was a bit off theme, but his book on the Greeks, a culture I too often cheaply critique for the legacy of Platonic dualism, is a great read: Sailing the Wine-Dark Sea as is his overview of Jewish civilization, The Gift of the Jews: How a Tribe of Desert Nomads Changed The Way Everyone Thinks and Feels.  His book on the high middle ages is now out in paperback which I’ve been wanting 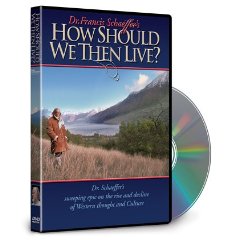 to read for some time now.)

For this gang, especially, Francis Schaeffer’s How Should We Then Live: The Rise and Decline of Western Thought and Culture.  It is a sweeping survey that I still commend, and enjoy any time I pick it up. We have the DVDs, too, of the original 10-part series.  If you haven’t read it or watched ’em get it on your Christmas list, quick!

C.S. Lewis’ own Abolition of Man is about first things, a profound bit of cultural criticism, going after the reductionistic ways of scientism, the need for a wholistic view (also in education) that honors the full dignity of the human person.  It is not his most well-known book, and it is a serious little work, but it pays off with great rewards, even if it takes more than one quick read-through.  Highly recommended.

Whenever cultural discernment is needed, we often take copies of Question of God by Dr. Armand Nicholi, Jr. of Harvard Medical School,  which is a spectacularly creative and interesting contrasting of the worldviews of Lewis and Sigmund Freud as they debate God, love, sex, and the meaning of life. (The Lewis Institute hosted him several years back before the book came out, lecturing on these two intellectual giants.)

Although it is most
ly about bio-ethics, the new release from the intellectual journal The New Atlantis, In the Shadow of Progress: Being Human in an Age of Technology by Eric Cohn 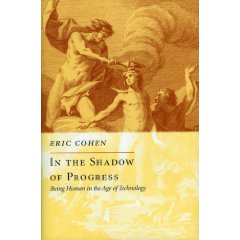 seemed like a good compliment to these dire proceedings.

Of course the award winning tour de force by Canadian philosopher Charles Taylor, A Secular Age, is one that fits helpfully into this batch of insightful faith-based cultural criticism.

I have written in the blog and review column why I think that the most urgent and interesting and important book of cultural analysis and Christian reflection this year is the brilliant Beyond Homelessness by Brian Walsh & Stephen Bouma-Prediger (Eerdmans.)  It suggests that the highlight of modernity is finally a displacement from place, and this is oddly enshrined in the postmodern nomad.  From metaphorical placelessness and homesickness–something Lewis wrote powerfully about—to the economies that produce literal homelessness amongst the poor and refugee, our cultural ethos is one that does not attend to home.  Ecological and environmental thinking, deeply rooted in the God who makes homemaking covenant with this planet, our home, is central to the task of re-imagining the possibilities of restoration, they insist.  And I think they are correct; whatever we can learn from the fall of the Roman Empire, and however important Mr. Guinness’ insights about the religious freedom charter from Williamsburg days, our essential relationship the Earth, and consequently our place on Earth, must be more urgently explored as a foundational matter.  No society can endure, and no faith should, that dismisses the goodness of creation and the duties of real living, here. 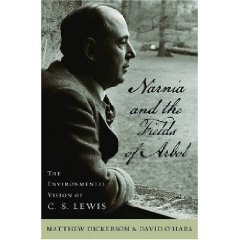 And so, I was thrilled when a long-awaited academic book showed up the day we were heading to the conference, a solid study of  environmentalism within the writings of C.S. Lewis.  Written by two evangelical scholars, whose other books (such as From Homer to Harry Potter) we have enjoyed selling, this new work was a perfect reminder of this vital piece of any discussion or visioneering about cultural renewal: we must have a viable doctrine of creation.  We happily suggest the brand new Matthew Dickerson & David L. O’Hara, Narnia and the Fields of Arbol: The Environmental Vision of C.S. Lewis (University of Kentucky Press; $35.00) for your consideration.  Dickerson knows his stuff, he co-authored a similar title a few years back, Ents, Elves and Eriador: The Environmental Vision of J.R. R. Tolkien  (also U of K Press; $35)  Both are in a series named “The Culture of the Land.”  I wonder what the Roman Empire (or the Pax Americana one) thinks about that?

Next post, I’ll tell you about another important book, reflecting on a very important author, that will help us further on this very matter.  Stay tuned, it’s going to be good.  Thanks!