Sometimes I spend time here at BookNotes explaining what we are about, why we like some books so, celebrating the kind of stuff Tom Sine talks about when he writes of “Creating the Future One Mustard Seed at a Time.”  (I reviewed his New Conspirators, a while back, here.)  Sometimes, though, we just tell of some random books, hoping the great titles speak for themselves. Yesterday brought a batch, and we listed a few in the last post.  More today!  Here ya go.  Extra-nice special price down below, too.  What a day!

Longing for God: Seven Paths of Christian Devotion  Richard J. Foster & Gayle D. Beebe  (IVP) $25.00  Many know our fondness for Foster’s extraordinary body of work.  He earlier wrote in Streams of Living Water of several faith streams within the river of the Body of Christ.  Here, he re-visits these key streams, focusing rather on key individuals, others who have gone before, showing their insights and tendencies as paths to deepen our awareness of God’s love.  There will be much to tell of this (Beebe, now President of Westmont College, was a student of Foster’s when he first gave class notes of what was to become Celebration of Discipline.)  This may be the highpoint of the IVP formatio line, and we are thrilled that it arrived early, happy to be among the first to celebrate it.  Now to read, pray, ponder, and experience God’s goodness with the help of the many guides they tell about in this marvelous, useful, resource.  Here is a very nice video clip with the authors describing their “tapping into a history and pattern that comes down from us through the ages.”   Please, please, take a moment and hear them out.

A Fine Tuned Universe: The Quest for God in Science and Theology  Alister E. McGrath (WJK) $39.95   Endorsements on the back are from stellar scientists such as Philip Clayton, Francis Collins and. John Polkinghorne.  McGrath is a splendid Reformed scholar, an Anglican theologian, who also holds a PhD in science and theology and is well suited to help us continue this conversation.  Just last night I groused at the false faith/science dilemma portrayed during House.  (One sympathetic character says faith and prayer is good for the waiting room, but not the operating room.  Now there’s a dualism to unpack, eh?)  And today I got an email from an ID center describing a particular secular scientist who has affirmed the legitimacy of teaching about ID in science classes (debunking the misunderstandings of the Kitzmiller v Dover fiasco.  We really need these kinds of thoughtful scholars like McGrath to help us think all this through, and he is top-notch, serious, devout, important.

A Science and Religion Primer  edited by Heidi A. Campbell & Heather Looy (Baker Academic) $19.99  Book for book, Baker Academic is the most important and interesting Christian academic press going.  And this, my goodness, what a resource!  With dozens of authors, and a stellar advisory board, this compendium of articles makes this a go-to dictionary for anything faith/science.   Ms Campbell has a PhD from University of Edinburgh and Ms Looy’s is from McMaster University.  Four substantive introductory essays set the book’s background, and the rest (over 100 entries) offer an A-Z listing.  Remarkable.  Here is a bit more on the book (from the publisher’s webpage;  for even more, click on their “media” kit link.)

Questions of Truth: Fifty-One Responses to Questions about God, Science, and Belief  John Polkinghorne & Nicholas Beale  (WJK) $16.95  When a forward is written by a Nobel prizewinner in Physics, and a major endorsement comes from another Nobel prizewinning scientist, and it gets a rave review from Alister McGrath, and the British “book launch” was held at the Royal Academy, you know this really must be quite thoughtful.  Polkinghorne, noted above, is a major figure in today’s discussions about faith & science (he’s written at least 26 books!)  An ordained minister in the Church of England, he has been knighted and won the prestigious Templeton Prize in 2002.  This, though, looks like a fairly entry level guide to thoughtful faith in an age of science.  Here is their website.  Come back and order from us if it strikes you as useful, or if you are a fan of Polky.

A Story of Rhythm and Grace: What the Church Can Learn from Rock & Roll about 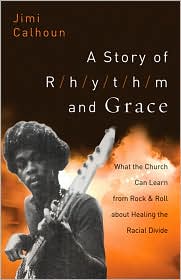 Healing the Racial Divide  Jimi Calhoun (Brazos) $15.99  Calhoun has played alongside of and worked with some of the most renowned of pop performers, from Jimi Hendrix to Etta James, The Four Tops to Mick Jagger,  Elton John to Parliament-Funkadelic.  You’ve got to read more to learn about this amazing guy.  (How many Pentecostal preachers publish on Brazos and get a blurb on the back from none other than the New Orleans hero, Dr. John?  What a night, indeed! Or thank Sly Stone in the acknowledgments!)  Charlie Peacock writes that Calhoun “has accomplished that all too rare achievement—he wrote an absolutely unique book that fills a true need.”  Musicians have often been in the forefront of racial reconciliation, so we must listen to this storyteller, preacher, rock and roll storyteller. 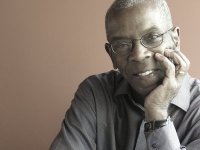 I’ll be writing about this cat more, for sure, but for now, check this out, from the back cover: In A Story of Rhythm and Grace, Calhoun weaves together engrossing stories about racial differences and reconciliation from his life in the music world and his life in the church.  Reflecting on how he has often found more racial harmony on the stage and in the recording studio than in the pews, Jimi shows what religion might learn from rock and roll.