It has been an unusually rich week for new titles here at Hearts & Minds
and I have large regrets about not being able to keep up telling you about them all.
We cherish our many on-line friends and the supportive, book-lovin’ community
we’ve become. There are so many I’d like to tell you about in greater detail.
For now, though, some quick announcements about some meaty ones, and a great blog special discount
deal.

My friend Bobby Gross called a few years ago and said he
wanted to write a book about the church calendar and the liturgical year. He was
worshiping in a small Episcopal Church in New York, active in leadership with
InterVarsity Christian Fellowship’s mature ministry with college faculty and
grad students, and I was tickled to make some suggestions of titles for his study. Alas, he has finally
come out with said book, and it is a wonderful, yearlong devotional guide, nearly unlike
any you’ve ever seen. Lush, thoughtful, wise, informative, and, yes, an
opportunity to inhabit the story. A really lovely introduction by Lauren Winner
is fabulous and there is a great bibliography (ahem) making this a truly useful
resource. Emilie Griffin calls it “a jewel of a book…” and Phyllis Tickles notes
that it is “beautiful in its gentleness and humility, this book is a gift to
Christians of all communions and denominations…” Whether you are well
experienced in living the feasts and seasons or if this is new terrain for you,
this is an essential guidebook that is very highly
recommended. 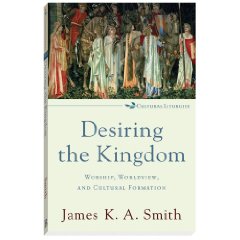 This is the first
volume in what is expected to be a grand three volume set on “cultural
liturgies.” By dipping back to his beloved Augustine, through Calvin, Kuyper, John Paul II,
and modern poets and authors (from Cormac McCarthy, Graham Greene,Tom Wolfe and more)
he shares a lively study of how contemporary rituals, practices, and habits form
character in ways that are not consistent with the things of God. For a Kingdom
vision and way of being in the world, we must have a robust eccesiology, and
give deep attention to the rituals of worship. It is not every neo-Calvinian
philosopher of culture who has been so deeply influenced by the Pentecostal
tradition, and who attend to meaningful liturgy, and few that engage so ecumenically, with conversation partners from
Alexander Schmemann to Stanley Hauerwas and the Ekklesia Project, Richard Mouw
to Anne Sexton. He names musicians like The Indigo Girls, Patty Griffin and the
recording of Bach’s St Matthew’s Passion as a soundtrack. This is
amazingly good, extraordinary stuff, a major contribution to cultural studies
(his interaction with Charles Taylor is very helpful), clarifying what we mean
by worldviews, and how a Christian way of life can be sustained by our
worshiping communities. A must-read for serious thinkers in our day. You will
be hearing more, I am sure.

I have regularly said that we stock all of
Marva’s good books and will read anything she writes. This brief book was a days
respite for me and it could be breezed through in almost one sitting. I have
since come back and reflecting a bit more carefully, and it is mature and
provocative stuff, as always. These meditations on Genesis 1, 2, and 3 may miss
a few things I’d wish to emphasize but she sees things no one else as noted,
makes connections with other Biblical texts, and always, always calls us to
caring, engaged, thoughtful and faithful service of the Triune God in the church
and the world. Mark Labberton writes, “Marva Dawn’s writing turns like a
kaleidoscope of truth and grace, and this book is no exception.” Amen to that.
Join this good author in the celebration of praise at the difference God makes
in all things. 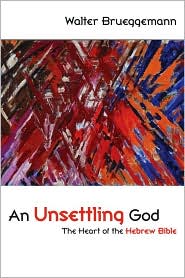 Where you daunted by the big and fact magnum opus of professor
Brueggemann, The Theology of the Old Testament? You were not alone: many
of us have gotten cold feet, or worse, at the thought of wading through that
thing. While this more than a serious abridgement, it is a great way into that
work. Here, they’ve expertly drawn the stuff about the character of God found in
that magisterial work, and offers a summary of his take on Israel’s testimony to
a surprising God. One reviewer says it is “a luminous and honest reading..a
masterful exposition of the fragility and resilience of covenant…” As Terrence
Fretheim summarizes, “He gathers the very important chapters on this theme from
his TOT and brings fresh testimony to an unsettling God who partners with
Israel, the individual, the nations, and the larger creation.” Highly
recommended.

Covenant Economics: A Biblical Vision for Justice for All  Richard A.
Horsley (WJK) $24.95

Horsley is known for his “anti-Empire” Biblical scholarship
(a recent one on Romans, for instance) and the faithful resistance of the early
church communities to the violence of the Roman Empire’s dominion. Although he
is not an economist, he deftly opens up what some of the Bible says about
economic justice. I still go to that central portion of Ron Sider’s classic Rich
Christians in an Age of Hunger for a re-telling of the immense material in
the Bible on this topic. Here, from a somewhat different angle, Horsley walks us
through the Scriptures anew, with plenty attention given to first century realities, social conditions in Biblical times, with tons of scholarly footnotes. Have a Bible handy, he says, and dig in. Very,
very timely.

Prospects and Ambiguities of Globalization: Critical Assessment at a Time of
Growing Turmoil edited by James W. Skillen (Lexington Books) $26.95

This
is a great price for a serious collection of dense essays about globalization,
gathered by one of the wisest political thinkers around today. Skillen has long
been a friend and mentor, and his balanced, non-partisan, views have been
instructive to many. He is a scholar and popularizer, a thinker and an active
citizen, a radical Christian (in the neo-Calvinist tradition, generally;
progressively evangelical and Reformed) who desires to offer a thoughtful and
deeply integrated scholarship to his faithful work. This gathering includes chapters by
Alice-Catherine Carls, Charles Glenn, Dennis Hoover, Rodney Ludema, Steven
Meyer, and Max Stackhouse, and, of course, a very important piece by Skillen.
Covering topics as diverse as education, the military, economics and
cultural shifts, this multi-disciplinary volume is a helpful contribution to an
on-going conversation about the discernment of our times, and a faithful
direction for Christian discipleship in public life.

Secret Faith in the Public Square: An Argument for the Concealment of
Christian Identity James Malesic (Brazos) $27.99

Leave it to Brazos Press to
once again make us think, long and hard, about faithful discipleship in these
trying times. This is bound to be misunderstood and controversial, and
I’ve not gotten through enough to say what I think, except to say: “get a load
of this!” Malesic (PhD, University of Virginia) and a prof at the Kings College
in Pennsylvania, makes the case that we have nearly ruined the watching world’s
perception of the gospel, in deed, nearly ruined the gospel itself, by allowing
it to be too tainted by political ideologies of the left and right. He suggests
that there is hardly any way to live out Christian faith wearing one’s faith on
one’s sleeve, without running the large risk of being “absorbed and prostituted
in our voracious secular culture” (as Rusty Reno put in on the back.) This may
be a “form of therapy” as we disassociate our public witness from worldly
accommodation, and allow us to live out public life in fresh and surprising
ways. Obviously, the real truth of Christianity cannot be reduced to a political
pin on a politician’s lapel (or a protester’s sign.) Granted. Is his call for
concealment the answer? This really is worth considering and talking about.

The Prodigal God: Finding Your Place at the Table DVD Timothy Keller (Zondervan) $24.99

We cannot tell
you how we esteem this thoughtful and energetic and very smart pastor working in
the hip corridors of Wall Street and Soho. From his faithful efforts doing
Biblical teaching and mature worship in lower Manhattan (and on-line where he
has such a huge following) he has earned the right to be taken very seriously.
His small book of last year of the same name was quite nice and truly helpful as
we uncover the healing power of the gospel; Jesus’ call, especially, to
the “older brother” who seems to not appreciate grace, has unlocked this famous
story for many readers. Happily, we now have Keller teaching in a six-part DVD
curriculum. You can buy the DVD, and a participant’s discussion guide ($9.99), even a whole kit ($54.99) with the book, all of the above and an
extra spiffy audio CD and rom, a leaders guide, a video trailer to promote it, and such.
Good stuff, but at least check out the DVD. Highly, highly recommended. Praise
be to God for such solid work. His excellent New York Times best-selling
Reason for God is now out in a trimmer sized paperback ($16.00.)
We still have some of the nice hardback that we are selling for the paperback
price, while supplies last. Great deal on an exceptional study of faith in an
age of skepticism.

off any two items mentioned

off any one item mentioned