A Hearts & Minds friend wanted to give a gift to honor a young teacher friend, who works in the public schools with younger children.  She didn’t want anything too overtly religious, of course, so we listed a few that have a good moral or message, or that offers something particularly interesting.  Thought you might enjoy seeing our suggestions of these recent recommendations.

The 2010 Caldecott Award was announced just a few
weeks ago, and the Medal for the Best Illustrated Children’s book of last year
was The Lion & The Mouse illustrated by the
wonderful, creative, and beloved Jerry Pinkney (Little, Brown; $16.99.)  This
breath-takingly beautiful book is very well manufactured, sturdy, with good paper and expert design, and the
painting is so, so clever (without being odd or self-indulgent.) Congratulations, again, to Mr. Pinkney. This is the
classic Aesop’s Fable, set in the Serengeti of Tanzania and Kenya, where “even
the king needs help…and little friends may prove to be great friends.”  A
wordless wonder–you have to see it! 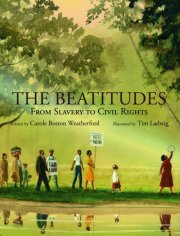 We have a new book that is very moving, in
beautifully illustrated watercolors for children, that is more or less the
history of African Americans, from slavery through the underground railroad,
into the civil rights movement, ending with the inauguration of President Obama. It is
called The Beatitudes: From Slavery to Civil Rights
written by Carole Boston Weatherford (Eerdmans; $16.99.)  It is
beautifully done, emotionally powerful, and what is so interesting is that it has the beatitudes from the Bible, showing that these faith principles nourished the African American
community over time.  It is in that sense overtly Biblical, but could be appropriate
for public school use, integrating this historically-accurate insight that the
Bible gave comfort and inspiration to the struggle for justice.  It might work,
without seeming “pushy” or “sneaking” religion into school, since it is a true account of how this ethical code was part of much of black history. And about
the power of the text. For ages 7 or 8 and up thorough 12 or so, although it
does show some of the civil rights ugliness, so might upset children that are
unaware of what happened…For those who follow such books, Tim Ladwig is the amazingly talented illustrator who did the rich and important edition of the 23rd Psalm, set in an urban ghetto, and another one, about a black child, living into the promises of The Lord’s Prayer.  They are called Psalm Twenty-Three

and Lord’s Prayer, both in paperback from Eerdmans.  Perhaps not as useful for public schools, but you should still know these excellent and colorful books. 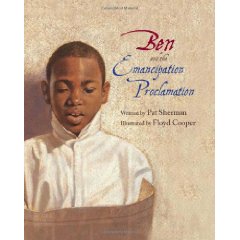 Another lovely book we are very, very fond of is brand new—the truly
stunning Ben and the Emancipation Proclamation
written by Pat Sherman, and illustrated by the famous Floyd Cooper (Eerdmans;
$16.99.)  The attention to detail and extraordinary art is spectacular, but the message is equally powerful.  It tells the tale of a 1860s slave boy who learns to read (he has to keep it a
secret for a while) and eventually comes to be the one to read the Emancipation Proclamation.  It is about the most evocative, beautiful children’s book about
the African American experience I’ve ever seen, and the subtext is that knowing
how to read is liberating.  What a great, great, book! Great for ages 7- 12. Highly
recommended.

Speaking of the power of reading, The
Flower written by John Light and illustrated by Lisa Evans
(Child’s Play; $16.95.)  This is a hard book to describe, a bit darkly
illustrated, allusive in the mysterious way that some of Chris Van
Allsburg’s work is. (I told you about The Wretched Stone before, about
the sailors who turn into monkeys because they watch what the reader learns in
the end is a TV. Ha!)  In this story, the world is strict, dark and gray, and
the boy lives in a small gray room. He goes to a boring, scary library, where
forbidden books are kept (you’ve got to see the pictures!) and discovers a book
that is called “Do Not Read.”  Of course he does, and the upshot of the
story–through some clever twists–is that it tells how to grow plants, which
over-take the darkness of the concrete culture.  These green sprouts make him
smile, of course, and brings life to the city.  Simply and a bit haunting, yet
finally joyful. Very few words on the page, so it is good for early elementary,
but the creepy look of some of it might appeal to even older kids.

The Curious Garden  Peter
Brown (Little, Brown) $16.99 Funny that I picked this one, too, to tell you
about as it is a very similar story, although not nearly as mysterious or dark
(and nothing about a book.) The pictures are less haunting, and Brown is known
for his usually cheery and whimsical stories. Here, a boy starts planting
gardens around a drab and broken-down city, and he brings beauty place by place,
until everybody gets excited, and gardening breaks out, people start trimming
hedges into beautiful landscapes, and he beautifies the city, “one garden at a
time.”  Fun, especially for early elementary or pre-school, even.

Dreams to Grow On
Written by Christine Hurley Deriso Illustrated by Matthew Archambault
(Illumination Arts) $15.95  In this lovely book, a dark-haired middle elementary
age girl imagines what she might be when she grows up.  She imagines all these
options, and each soft water-color just shimmers with hope and idealism. (In
most frames, she is doing something rather normal, and certainly plausible, but it is framed in a positive way, nearly noble.)  Interestingly, she
gets each idea from looking around, and seeing her brothers or mother or father doing
stuff.  Written in sweet rhyme, this is a delightfully inspiring book of good
dreams.  Theologians might say it is a book about calling and vocation.

Sunday in Kyoto Songs by Gilles Vigneault
Illustrated by Stephane Jorisch (The Secret Mountain) $16.95  This is so cool
and rather rare, so had to tell you (since I know you are interested in
music.)  This is a wildly illustrated kid’s book, with very sparse text, telling a whimsical story about an old Cajun banjo blues player who moves to Japan with his Asian
wife, where he meets up with various musicians who come to play–a classical
guitarist from Spain and several Asian musicians with their unique
instruments—bouzouki, the koto, a shamisen— who all then do a concert for
some Buddhist monks in their flowing robes, and a surprise ending. There is a CD-rom slipped in the
back that has a great audio recording of the song that this story grew from, and 13 other quirky story-songs, all written by the famous French Canadian, Gilles Vigneault (who some call the Pete Seeger of Quebec.)  For what it is worth, if you want some little-known street cred with hipster kids, this publisher did a similar storybook/CD to some songs from the band Trout Fishing in America.  Betcha didn’t know that!

We’ve carried their Down at the Sea Hotel book/CD of tender (and sometimes odd) lullabies, sung by the likes of John Gorka, Eliza Gilkyson, and the Wailin’ Jennys (before they were quite so famous) doing songs by the likes of Nanci Griffith, Carole King, Greg Brown and (yes!) Bruce Cockburn (Little Seahorse, naturally), so we like this publisher. Sunday in Kyoto, showcasing these songs of Gilles Vigneault, is fabulously interesting, even if you are not a French Canadian. Enjoy.