READ JIM WALLIS FOR YOURSELF

I was on the Beck bandwagon, off the bandwagon, but now back on the bandwagon.  I think I was among the first to sign a Facebook petition with Bread for the World, a bi-partisan Christian citizens group that works on legislation against hunger and poverty, against the dumb comments by Glen Beck (who, now famously, had said that if your church talks about social justice you should quit that church ASAP, since social justice is not part of the gospel.) I twittered and Facebooked that BFW call to reject Beck’s foolishness.  Bread for the World is a fine organization, and a good illustration of our conviction that God’s reign—Christ as Lord!—must be professed and lived out in every zone of life.  Even in politics, we are called to be good citizens and pray and work for the cry of Psalm 72: “Give the king thy justice, O Lord” for we know (Isaiah 1:10) that the Lord hates unjust legislation. And, amongst other things, good laws help ensure each gets their due, including the poorest among us.  (See The Rising of Bread for the World: An Outcry of Citizens Against Hunger by Art Simon (Paulist; $16.95) for a wonderful study showing how BFW does that.) Jesus’ first sermon is an allusion to the Year of Jubilee, which surely had public, economic, even political implications.  Being social creatures (that is how the Holy Trinitarian God made us) who live in the world of society, culture, governments, policies, international banking and business, it is just silly (it is beyond silly) to suggest that we should only help people privately, through charity.  Yes, public justice is part of what God intends for his world. Glen Beck is just wrong.

(As are some who have listed our bookstore as a dangerous place, for this same reason.  They have gone on record saying that if verbal evangelism isn’t done first and foremost, even relief efforts like saving children from the rubble in Haiti is wrong, and anyone who supports such efforts is approaching heresy.  They believe in burning books, too, so you can imagine how spooked we were by their toxic religion and false accusations against us.  I would imagine they like Glen Beck.)

Still, I determined not to write about the Beck fiasco, not to re-tweet any of the many twitter comments I’ve seen, not even watch the spoofs on youtube.  I thought it would run its course and that would be that.

Then Sojourners got involved, my old friend Jim Wallis asked to appear on Glen Beck’s show, and Beck got scary-weird talking about how the “hammer was going to pound over and over” on Wallis and his “cute little organization.”  If you don’t know (and God bless you if you don’t) about this, it was truly bizarre, as Beck made these ridiculous quasi-accusations and threats to Jim and the Sojo gang.  I am embarrassed for my friends who like Mr. Beck; this was so ugly and over-the-top odd.  Is he often like that?

Still, the showdown was a bit too sensational for me, and while I’ve got every back issue of Sojourners since the earliest Post American days, I don’t think they are always correct, and not always the most insightful or Biblically faithful. Mostly, I was bored by the prospect of a Jim vs Glen smack-down, which seemed just too predictable. 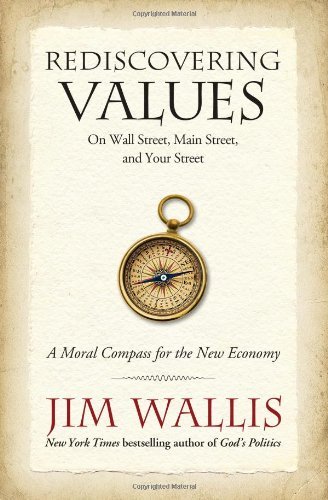 And then I recalled how much I truly like most of Jim’s books, including the new one Rediscovering Values: On Wall Street, Main Street, and Your Street—A Moral Compass for the New Economy (Howard Books; $24.00.)  It is so hopeful and insightful, so reasonable that even a popular conservative speechwriter and pundit (Mike Gerson, who I respect immensely) writes of it:

“One does not need to agree with Jim Wallis on everything to find Rediscovering Values insightful and timely.  In our current economic struggles, Wallis sees an opportunity, not just for recovery, but for a renewal of important, neglected ideals.  This is a needed voice.”

Or, hear this from Leith Anderson, now the President of the conservative National Association of Evangelicals, who says:

“Agree or disagree—Jim Wallis touches your heart, stretches your mind, and challenges your values.  He thunders like an Old Testament prophet, yet he is gentle and gracious. With a heart for people and a dream for a better tomorrow, Jim Wallis looks tough times in the eye and talks of hope.”

Wallis very convincingly makes the case that our financial crisis is not a matter of numbers, of misunderstood economic theory, not even of a few bad eggs and their gratuitous greed.  It illustrates a moral crisis of our culture, and, as such, it demands spiritual answers.  We are living into and out of the wrong story, and it must be replaced with a new, better Story.  As Wallis makes clear, our deepest and most ecumenical faith traditions call us to care about the common good (social justice, included) and that from our personal lives to our work lives, our banking and shopping to our voting and politics, our family habits and our recreation, we have to live differently, based on gospel values.  To do that, we must have our deepest commitments change.  To use the language Jim used to use more passionately as a younger, radical evangelical, we need converted.

I still think Jim’s most substantial and helpful book is his classic Call to Conversion: Why 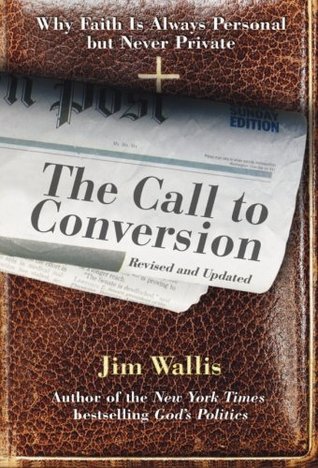 Faith is Always Personal But Never Private (HarperOne; $13.95).  With the exceptional popularity of his God’s Politics book and group guide Living God’s Politics a few years ago, HarperOne quietly re-issued his late-70s classic, edited, expanded and up-dated for the new century.  I am happy to say it is one my all time favorite books.  I’ve read out loud from his section on Christ as Lord countless times, and greatly appreciate his chapter on community.The chapter on peacemaking is important and clear, and the one chapter on poverty nearly says it all. Check out the “Bible and the newspaper” cover design, alluding to the famous Barth quip. I really do recommend it.

We will offer it at a special sale price, too (see below.)

The new one Rediscovering Values is wonderful, too, in part because it is so sensible, so clear, so interesting. (I dare you to read his part about playing baseball with his boys and not be touched. I have been challenged each time I’ve read his piece about our calendars and schedules being “moral documents.”)  He has a good, if brief, chapter on the meaning of work, and it is evident that his view of culture transcends the simple polarities of liberal or conservative.  I think this “moral compass” will speak to anyone who has pondered not only how we got in our economic mess, but how we might get out of it.  That is, not just “get out of it” and back to “normal” but how to re-imagine what “normal” is.  Do you know the old Bruce Cockburn song–about these very themes of economics and injustice, standards of living, corporations and state violence–called “The Trouble With Normal”? (Listen here (studio) or here (live). Of c
ourse, the famous line answers—“it always gets worse!”

We must not desire to go back to normal, the economics and worldview and way of life that gave rise to the crisis of recent years.  This time can be a time of reappraisal, and Rediscovering Values is a guide to the conversations we simply must have if our culture is not going to “always get worse.” We can use this window of time, and this book, as an opportunity to ask some hard questions of ourselves.

From the biggest forces on Wall Street to the very lifestyles in our homes and neighborhoods, we must repent.  And live in, as the Lutheran liturgy nicely words it, “in newness of life.”

* * *
I also got fired up to post on this (after previously determining not to) when I read this important report and rebuttal that Jim wrote.  Beck accuses Jim of being a Marxist, and he seems to imply Dorothy Day was a commie, too. (He does this by playing fast and loose with some audio tapes, like Jerry Falwell used to do with Alan Boesak and Desmond Tutu in the anti-apartheid struggle.)  If you click on that link, you will hear a live audio of a conversation between Dorothy and Jim. Have you read her autobiography, The Long Loneliness?  It is a classic, you know.

When I think of how Sojourners introduced me to Dorothy Day, to Oscar Romero, to John Perkins, to Phil Berrigan, to John Howard Yoder, all solid Christians who suffered much for their faith, and how my life and faith has been edified by the long-standing call to conversion and justice by Sojourners, I wanted to again go public with my frustrations with Beck’s immoral and dishonest accusations and applaud Jim’s reply.  I hope my conservative friends who esteem Beck will hold him accountable.  He is just out of line, dead wrong about the Bible, and wrong about Wallis. And wrong about the way he’s doing it all.

Best, though, is skip him, and read Wallis for yourself.  Since he is dedicating so much time this week to spreading misinformation about Wallis, I know you know people who have heard this, and who may wonder.  It is important that some of us have these books under our belts, ready to be loaned out.  Why not form a study group–maybe Beck fans and Sojo fans,even– and discern for yourself.  Is Rediscovering Values consistent with a Christian perspective?  Can it be a “moral compass for the new economy”?  How about The Call to Conversion?  Have you heard that call lately?

10 thoughts on “Rediscovering Values: On Wall Street, Main Street and Your Street and The Call To Conversion”