Not too long ago a website came to my attention (they were complaining about the heretical books we sell, authored by the likes of Eugene Peterson or Brennen Manning or on topics like creation care) and although I have tried to forget their cult-like narrowness (seeming to advocate book burning, literally) I involved myself (against dear Beth’s wiser wishes) in asking them to, at least, tell the truth about what authors do or don’t really say.  We can disagree about much in our culture, and certainly even within the church, but this nasty tendency to make our adversaries worse then they are is just wrong.

I mention this because I realize that a few folk out there—maybe even among our fair readers—don’t trust Donald Miller.  They have heard he is a bohemian who is a bit out there.  Blue Like Jazz (I first ordered it not only because I had so liked his previous book about a post-college road trip in a mini-van, but also for the sheer allusiveness of the title) is a bit meandering, full of odd musings, edgy, even.  It is laugh-out-loud, hold yourself so you don’t pee on the floor, funny.  It is not an orderly theology book. But I think it not only has a good heart, but is very thoughtful, even wise at times.  His memory of growing up, his ponderings about deep things, his understanding of being a follower of Jesus, it is all very, very much worth reading.

And so, I was particularly peeved when that dumb website said the most outlandish things about the book, saying things about it, and about the author, that simply were untrue, grossly untrue.  I called ’em out on it, but they did not back down.  One can find fault with Mr. Miller, I suppose, but these were flat out lies and it nearly made me ill to think of it, and the great harm done by people who are too sure that they are defending God.  I am sad even writing it now.

It is nearly a cliche, it seems, one that the emergent movement and many others (including some Christ-followers who are now writing books about not belonging to a church) seem nearly defined by, that ugly and shallow fundamentalists have made grace-filled, robust Christian faith nearly untenable these days.  Yeah, yeah, I get that.  Don’t get me started.  But, sometimes, I want to shout out: get over it!  Sure there are lots of unappealing and even mean Christian folks, too many slimy televangelists, plenty of tacky “Christian” kitsch in the “Christian bookstores” (that don’t stock many real books.)  But we sure don’t need to reject orthodoxy or traditional faith communities because some are overly middle class or up-tight or seem to not quite understand what Jesus called “the weightier matters of the law, mercy and justice.” (Matthew 23:23.)  And, anyway, for every so-called “Christian” militia plotting evil in God’s name, or some using despicable language about gays and lesbians, or every super slick “name it and claim it” religious huckster,  there are decent and dedicated followers of Jesus doing quiet deeds of Kingdom worth.  And there are those who are indeed credible, innovative, and interesting who bring a creative eye and voice and yet maintain clear Christian conviction.

Which brings me back to Donald Miller.  He is a fun author, and he is interesting, and his last big book—A Million Miles in a Thousand Days: What I Learned While Editing My Life—has gotten great press.  I’ve raved about it here at BookNotes, truly enjoying the notion of how the principles and structures of “story” (they were making a movie about his life, and realized there wasn’t much happening in Blue Like Jazz except going to the coffee shop to think and write about God) could help him actually make something of his life.  It really was one of the best books I read last hear, and so love certain parts that I’ve taken to reading pages out loud to friends who will listen.  Lawyer and global humanitarian Bob Goff plays a part in it, too, and anyone who knows Bob knows he is about the most amazing fellow one could ever meet, all three of the musketeers (and stooges) rolled into one.  If Goff befriends Miller, and Miller tells about that, trust me, it is worth reading. 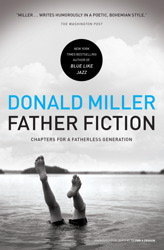 fatherless young men.  He writes about not knowing his own father in Blue… and then revisited that in an entire book—a tender and thoughtful book about why boys need men in their lives—called To Own a Dragon.  Happily, it has been considerably expanded and re-released this spring under the title Father Fiction: Chapters for a Fatherless Generation (Howard Books; $19.99.)  It isn’t quite as hilarious as his other stuff as it is a tad more serious in focus, but it still is Donald Miller.  Lots of stories, anecdotes both amusing and poignant, a bit zany, with considerable insight.  We recommend it.

So, no, Donald Miller is not that “out there” and he seems to hold a very orthodox, evangelical faith.  Those who have met him have enjoyed his presence, his honest, Gen X tone, and his authentic, casual demeanor.  (I’ve been with Christian authors and convention speakers who just reek of showmanship and pride.  I honestly don’t see this in Donald, although he may have to fight for integrity and character here, who knows?) 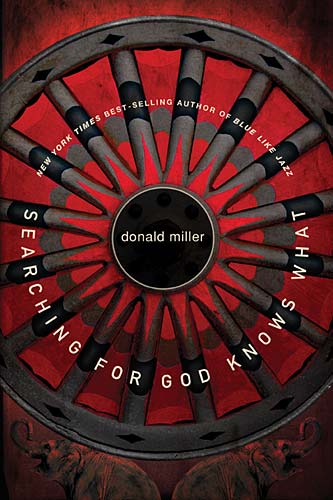 Those who care about solid doctrine, who worry about what kind of wacky stuff this Portland storyteller is promoting only need read his most substantial book, newly released this month, Searching for God Knows What (Nelson; $14.99.)  It has a structure a bit like Blue…, but perhaps less memoir and a bit more exposition.  He does extended riffs on certain notions (including his fairly famous Calvinist take on Romeo & Juliet.)  He’s got the edgy counter-cultural beatnik thing going on, and the artful cover—a very authentic-looking bit of Americana, a carnival-esque publicity poster—sure gives it the feel of a book that any young literary type or coffee shop hipster would love.  Yet, despite the feel, the tone, the vibe, when the haze from the smoke and mirrors in the fun house clear, this dude can preach.  This is gospel.  Not so plain and not so simple, but it is solid.  We are thrilled that such an fine writer and interesting thinker can speak with clever prose and wild analogies into the hearts of seekers, reminding them of pretty basic, true truths. Truths about Jesus.

(And, yes, there are some of those weirdo shifty mirrors in this fun house.  One chapter is called “The Circus of Redemption: Why a Three-Legged Man is Better Than a Bearded Lady.”  Got that?)

He has some serious ideas, here, but yet–and this is an idea worth savoring (as John Piper might say)—“Being a Christian is more like falling in love than understanding a series of ideas.” 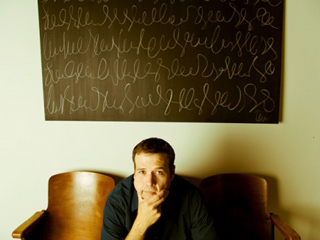 snow globe, Donald Miller’s newest
collection of essays creates a swirl of ideas about the Christian life that eventually crystallize into a lovely landscape…”

The new expanded edition, by the way, is considerably expanded, and also includes a brand new introduction, a personality theory based on Genesis (essentially a whole new chapter), and a game hidden in the book with clues, anagrams, and codes that unlock prizes and secret content.

I almost feel like some barker on the mid-way, asking you to “step right up” ladies and gents.  But it really is a hoot.  This revised version of Miller’s most substantial book really is a bit more interesting, and re-reading it, with an eye for these weird clues—it is sort of explained in a cool, glossy insert—makes the book a bit like a tilt-a-whirl.  I’m enjoying the wit, appreciating his famous cadence, making sure that my claim that he’s really quite orthodox hasn’t been undone in this new version, and yet all the while doing this odd anagram thing.  Only Donald Miller, I think to myself.  Or maybe Bob Goff.  I bet he cooked this up, daring Miller to put games in his most serious, theological book. What a holy, goofy blast.

All the game instructions and (yes) the decoder wheel can be found at www.DonaldMiller.Fan.com or www.SearchingForGodKnowsWhat.com.

Our little game is simple.  Buy Searching for God Knows What (revised) from us and we will thank you for it.  And give you a 20% off.  Buy the book from us along with any other Donald Miller book or DVD and we will give you a 30% discount on them all.  Step right up…

ORDER HERE
Takes you to the secure order form page at our website.
Or click here to be go to our “inquiry” page if you have questions.