A few weeks ago, I posted a quote here at BookNotes by the Kentucky farmer, novelist, poet, and essayist, Wendell Berry.  Some very good friends used the quote in a wedding, and it was lovely to share the experience (and the quote) with our readers.

One of the things Wendell Berry emphasizes is human-scale living, a sense of place, being attentive to bio-regions, the lay of the land of the neighborhood.  His slow, sweet, well-rendered and much-loved novels all explore these themes, as do his clear, thoughtful essays.  This summer, as folks think about supporting farmer’s markets, and as “localism” continues to get good press, as Christian people, even (like readers here) ponder the implications of Biblical teaching about stewardship for our daily economic practices, as we look for charming efforts at more sustainable neighborhood planning, and protest the cheapness of Wal-Mart, it is good to know we have another set of essays from our ally Mr. Berry. 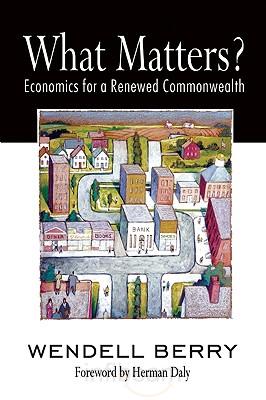 What Matters? Economics for a Renewed Commonwealth is a new gathering of essays around this theme, published in paperback by the classy Counterpoint. Just as the eloquent and passionate food sociologist Michael Pollen introduced a gathering of Berry’s writing on food, and wrote a lovely forward to it (Bringing It to the Table), here, we have a bit of a collaboration with the renowned professor of economics Herman E. Daly. Daly is known for ecological economics, for a steadfast career of fighting the idol of unbridled growth (indeed, one book is called Beyond Growth) and for his work, For the Common Good.  For those of us in the Dutch neo-Calvinist tradition, it brings to mind the indispensable work of Bob Goudzewaard; younger emergent folk may think of Everything Must Change by Brian McLaren.  Jim Wallis’ recent book on economics comes to mind.  The discussion about Christian principles and economic theory is on-going and complex.  Mr. Berry is very, very important in helping us understand some very basic things.

Here, Berry wisely confronts the financial structure of our modern society, and the impact of late capitalism on American culture.  A few of these articles were published elsewhere, and a few are new.  As the back cover puts it, two of the new pieces (“Money Versus Good” and “Faustian Economics”) are “treatises of great alarm and courage.”

Berry is sometimes considered to be aligned with the left.  He has done civil disobedience 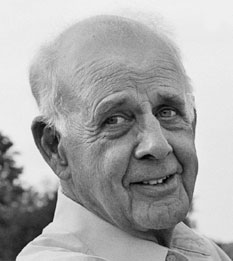 against the pollution of the coal companies, has protested mountain top removal in his beloved Appalachia,  and while he has written about why he distrusts movements, he has been increasingly available to help environmental activists, like his good friend Bill McKibben.   Recently, Mr. Berry removed a historic archive of his letters and papers, early drafts of his novels and such, from their home, housed at the University of Kentucky, because the UK has taken large money from big coal companies, even naming buildings after them.  You can read about Berry’s principled opposition to this, here.

As What Matters? Economics for a Renewed Commonwealth will show, however, Berry is less a leftist or liberal than a Jeffersonian.  He is a serious Christian, as well, and his faith and theology shape his commitments to the small and local and caring, as it does his skepticism about bigness, growth,  and ideology (especially, the ideology of progress.) He has a piece here on Liberty Hyde Bailey, the Methodist rural theologian that is very good. (We have a great biography of him, and a paperback collection of his mid-20th century work, by the way.)  He has a piece called “The Work of Local Culture” and one entitled “Two Economies” that first appeared in 1988 which I have always loved.  It is good to see these pieces together with the new ones, compiled all around the themes of true and appropriate economics, written as only a practicing farmer could.  Highly recommended. 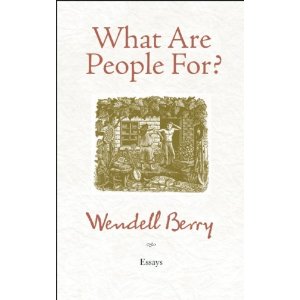 We are also happy to announce that two old Berry collections that have been out of print for several years have been re-issued, with new covers.  I do not know why they went out of print previously, and one (What Are People For?) is truly great, fairly standard Berry fare—literature, farming, land use, religion, localism, eating well, and so forth. I have been sad that it has not been available for a while because I often suggest it as a good place to start to dip into Berry’s essays.  This includes a few of his most significant essays ever, I think.  (You may know his one called “Word and Flesh” and his piece about not buying a computer, and his one about feminism, or “A Few Words for Edward Abbey”, all here.) 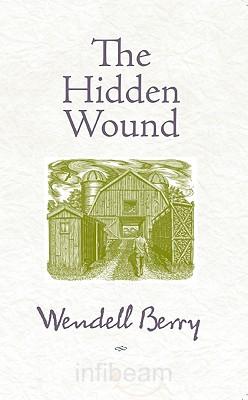 The old one happily reissued, The Hidden Wound, is truly an extraordinary book, a bit rare, even for Berry.  This is his look at the quandary of race and racism in America.   Poet Hayden Carruth wrote in The Village Voice that Berry “has produced on of the most humane,
honest, liberating works of our time.  It is a beautiful book.”  Larry McMurtry wrote that it is “A profound, passionate, crucial piece of writing…Few readers, and I think, no writers, will be able to read it without a small pulse of triumph…the statement it makes is intricate and beautiful, sad, but strong.”

Much could be said about this brief book, but, as you might guess, Berry shows that our disconnect to land, and to place, leads to all sorts of barbaric stuff (like school busing), including this old wound of race.  He wrote much of this as a young man, in 1968.  He re-visted and expanded it in 1988.  I’m glad it is back in print with this lovely new cover.