Following my last post, I thought I’d highlight just a few other titles that mainline denominational folks, especially, might want to know about.  Of course it is our deep wish that more evangelical folks would draw on these resources, just as I hope our more mainline friends consider the recommendations we make from conservative publishers.  We try hard to get beyond those increasingly unhelpful labels, and seek truth and renewal and helpful stuff any and everywhere.  We bet that in many ways, you, too, long for this, hoping to learn from those outside of your own immediate camp. 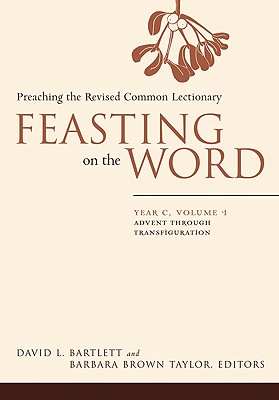 Do you know the much-celebrated on-going series Feasting on the Word: Preaching the Revised Common Lectionary, the lectionary commentary edited by David Bartlett and Barbara Brown Taylor? (The Christian Century called them “monumental” which, I assume, is a good thing!)  Published every three months by Westminster/John Knox, there are four large hardbacks a year, for each of the three liturgical cycles, selling for $39.95 each.  Last year (year B) started the series, and we just got Year C, Volume 4.  That is, this recent one offers preaching aids for the Season After Pentecost 2.  The lectionary geeks will know this is what is sometimes called Propers 17 through the Reign of Christ.  In other words, this picks up at the end of August and makes the journey with you up until the start of Year A, the first Sunday of Advent. [Please note, the picture on the left is not the one for Volume 4; the publisher oddly doesn’t have a picture of that one available. They all look the same, though, except for the designation of the weeks.]

Bartlett and Brown Taylor are remarkable in their own right, but in Feasting… they’ve pulled together nearly anyone who is known in mainstream Christianity, and a few others, too—some to the left, some to the right, all skilled and guided by the Spirit, writing insightfully (usually) about the texts in question.

For each week, the reflections are arranged in four distinct themes or modes.  Somebody does a “homilietical” reflection (that is, hints to how to preach the text); one offers an “exegetical approach” giving detailed study of the words and such; then there is the “theological” contribution; and then insights from the “pastoral” perspective. It is surprising to me that not only are there these four different angles of vision into the text and the sermon preparation, but there are, among them, different interpretive moves going on.  That is, the four writers offering insights into these four aspects of the lection don’t necessarily agree.  My own pastor noted how much he appreciates that and what seemed a bit odd to me immediately was seen as the gift that it usually. is.  This is like having a veritable army of women and men at your side, inviting you into conversation with the assigned texts every week.  Even if you are not a preacher, this is a set of books worth considering.  If you are a regular preacher, it is a very useful volume.  If you buy one, I’ll bet you’ll want others, as they are that helpful.  They are ecumenical and mainstream in orientation.  We had a big stack at the Lutheran event just last week.

Speaking of being a bit geeky, I really like reading books about homiletics.  Yeah,  I know. You can read that sentence again, and it won’t get any more sensible.  I think these books designed for preachers are amongst the most under-rated texts around.  Preachers don’t even read them.  They rarely sell in the shop, although we have hundreds.  I’ve been dipping into a few, as I do from time to time, and my ecumenical dreams are underscored by the diversity of authors in conversation in those books.  Liberals, moderates, evangelicals, all in the same books!

The Folly of Preaching: Models and Methods  edited by Michael Knowles (Eerdmans) $18.00.  This is a collection edited a few years ago by a professor of preaching at McMaster in Ontario.  Some of these are just powerful, rockin’ insightful sermons—from David Buttrick, Thomas Long, Cleophus LaRue, Haddon Robinson, John Stott.  (There ya go for some mainline and evangelical collaboration!)  A few of the pieces are more like essays. Tony Campolo, whose professional sociological work was done like preaching, anyway, has a great chapter called “Preaching to a Culture of Narcissism” and Martin Marty reflects on “Preaching Rhetorically: Thanks, Aristotle and Apostles.” Edwina Hunter weighs in on the topic “Imagination, Creativity and Preaching.”  John L. Bell is in here, Stephen Farris, Elizabeth Achtemeier and more.  What a cool collection.

Interestingly, one of the strongest and most serious homiletics books this year is from an evangelical publisher not known for releasing preaching books.  I refer to the thoughtful, profound The Glory of Preaching: Participating in God’s Transformation of the World by Darrell W. Johnson (IVP) $23.00.  Johnson is renowned for being a good communicator at that renowned evangelical institution of higher education,  Regent College, in British Columbia. You know how interestingly faithful that place is with so many solid folks, from Gene Peterson to Marva Dawn.  Highly recommended.

The Preaching of Jesus: Gospel Proclamation, Then and Now by William Brosend (WJK) $19.95. This is a new study I’m itching to read.  It has a moving forward by Marcus Borg and a great blurb on the back by Ben Witherington who I greatly trust.  It shows four different styles of rhetoric used by Jesus, and then illustrates each chapter with a sermon that captures that style.  The sermons includes some of the most respected mainline folks preaching today—Barbara Brown Taylor, Fred Craddock, Bishop Michael Curry, Tom Long, which he then analyzes. What fun!  Preacher friends, get in on this and your Sunday messages will be better.  And the rest of us?  Join this conversation and you’ll learn how to hear good sermons, learn to critique them fairly, instead of just being grumpy on the way home from church about something the pastor did or didn’t say.  Hee, heee.  Plus, you’ll impress your pastor if you casually note that your reading a book like this.

Here is just one more recommendation of the many we have: Alyce McKenzie, a United Methodist pastor who used to minister here in the York, PA, area, has done several book on preaching.  Her new one is another of these sorts of those of us who are laypeople just might get a kick out of.  It is called Novel Preaching: Tips From Top Writers on Crafting Creative Sermons (W/JK; $16.95.)  Just as it sounds, she interviewed (or found interviews) with dozens of contemporary writers, novelists who are known for their craft, and she draws from them the habits of mind and heart, the daily practices, the tricks of the trade, of learning how to write, and write consistently.  Writing a good sentence or two is a good step towards creating a solid and mature sermon.  I know, I know–solid exegetical skills and orthodox theology are the foundation, and no clever tricks or awesome words-smithing can substitute for heart-felt proclamation of God’s Word for life.  B
ut, still, even the most Biblically-faithful thinkers and sincere pastors of the flock need some help figuring out how to write and speak well.  This book is a lot of fun for anybody who is called upon to create.  Kudos to Alyce for this cool idea. See, there is some very interesting stuff in the “homiletics” section.

HYMNS OF GLORY SONGS OF PRAISE 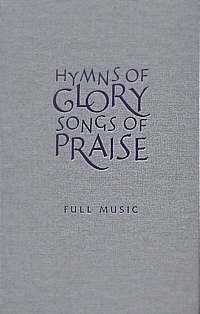 Hymns of Glory Songs of Praise edited by John Bell (Canterbury Press) $56.00  Well, I never know how to sell hymnals, really, and most often just hope folks know if they want one that they can inquire with us.  This, though, deserves special mention.  You may know John Bell of Iona, the vital and progressive spiritual community in Scotland (who publisher their own creative worship resources under the name Wild Goose.)  Bell has written so very much evocative, folksy, contemporary music, and has written widely about the significance of singing in our communal church lives, that when I heard he was helping compile this new volume (for the Presbyterian Church of Scotland and distributed here by the Episcopalians) I was truly excited.  The very day it came last winter, I sat down and read the introduction and it is very helpful. An index lists songs most suitable for children, and what they call “short songs” (some of which are like Taize chants.)  It is over 700 pages yet feels right in the hand.

Hymns of Glory Songs of Praise starts off with a section of Psalms to be sung, a blessed contribution to any hymnal.   There are ancient lyrics here, and some rich, modern hymns as well.  Still, to see the fascinating selections—a lyric from John Bunyan, a song by Bonhoeffer, a prayer turned to song from a Book of Hours (circa 1500), to Halleluya! Pelotsa Rona from South Africa to Tom Troeger and Carl Daw. There are some folky liturgical composers, of course, in the “St. Louis Jesuits” style—there is a selection or two from Michael Joncas, Marty Haugen and David Haas, and a few from Dan Schutte.  And a good number of international tunes, from China, Guatamala, various African lands.

What fun to see lyrics by John Calvin next to Shout to the Lord by Darlene Zschech; Brian 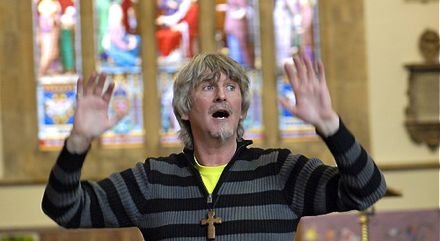 Wren next to William Cowper and Horatius Bonar.  There are classics by Philip Brooks and a modern chorus by Twila Paris.  I just smiled to see an index listing Julian of Norwich and Matt Redman.  I appreciate John Bell (and his work at Wild Goose) a lot, although it must have been fascinating to be involved in the Kirk committee picking these songs.  I really smiled to see so much from the Scottish Psalter and Paraphrases (Biblical paraphrases) and songs by Ralph Vaughn Williams, right there with Gaelic folk melodies, or songs by Ruth Duck.

The hymnal is arranged in Trinitarian fashion, with songs about God, Christ and the Spirit; in the Holy Spirit portion, however, is a major section called “The Church Celebrates” and it includes songs for a variety of purposes, from Baptism or confirmation, to grief, national concerns, and music for healing and wholeness.  This is very well thought through, and will be useful, I’m sure, for music planners and worship leaders of all sorts.

Speaking of hymns, the challenge of learning new songs, we just got in a new title published by P&R, Why Johnny Can’t Sing

Hymns: How Pop Culture Rewrote the Hymnal written by T. David Gordon. In a way, it seems to be another critical lambast of popular culture like his earlier book, Why Johnny Can’t Preach which was very thoughtful, witty, even.  I, of course, have large concerns about whether this is the best way to understand culture, music and such, but it is none-the-less certainly worth reading whether you agree with him fully or not. We sold it well at the Lutheran even last week; they don’t need it as much, though, as our friends whose worship services approximate a rock concert without the pot.  Not sure what I think, but you may want to check it out—I’m sure you’ll learn about forms and styles, and why we postmoderns ought to know a bit more about the process of music.  Sure would generate some good conversations, at least, eh?

BLOG SPECIAL
10% OFF
any book mentioned