A new long piece is up over at the monthly column at the Hearts & Minds website, archived under “August 2011.”  I usually do a longer review there, a big list or a rambling reflection naming lots of authors and books in passing.  This month I shared my involvement in a bunch of facebook and website debates, and finally list a whole batch of books about civic life, books I really like.  They are all offered at a good 20% discount, too.

Here is how it starts, slowly—I hope you read the whole thing:

I actually wanted to write about two other topics these past few days–we just got the new Richard Foster book on meditation called Sanctuary of the Soul: The Journey Into Meditative Prayer (IVP;
$16.00 hardcover) and there have been some other good spiritual
formation titles lately.  And, although I’ve mentioned Mark Noll’s
amazing Jesus Christian and the Life of the Mind (Eerdmans; $25.00 hardcover) in a Comment review,
I wanted to highlight it here at BookNotes.  I’m pretty eager to run
through a batch of new books and will do that soon.  Now, though, I’m
feeling a bit off-center, confused, needing to write about something
else.

Confusion by Jeanne Curin.
I
feel like I should offer a few resources that will help us navigate
through the rough waters of our political and cultural conflicts, waters
that got me a bit sea-sick this week.  The culture wars are hitting
hard these days and while I mostly want to be a conscientious objector
in these battles, my fingertips were kept busy this week posting on
various websites, blogs and threads of facebook conversations.  It has
made my heart heavy for various reasons.  As I wrote to one friend, it
is disheartening to try to entry a discussion as a voice of moderation
and reason and end up making matters worse and getting all irritated.

Here’s
the backstory and a few books that I think are important, wise,
balanced and helpful to understand this exact sort of conflict about
religion in the media, the ways evangelicals are construed, and the
questions about how to be civil and fair even as we advocate for a
pluralism that values a variety of voices, left, right and center,
religious, secular or neither.

Well, I have a lot of links there to a number of great articles about how The New Yorker, in a

story about Republican candidate Michelle Bachmann, wrongfully linked Francis Schaeffer, a hero of mine whose books and ministry influenced me immensely, and Nancy Pearcey, a friend of mine whose books I admire, to a fringe and weird group called the Theonomists; the author of the piece called the “Dominionists” which is another phrase some use, although not what the Theonomists call themselves.)  Yes, that’s the odd ball movement founded by R. Rousas J. Rushdoony, wanting to “reconstruct” American life–well, maybe not now, but someday, maybe–around the principles of the Old Testament civil codes.  Nobody takes them seriously, but a dozen major media outlets passed on this stupid trope that Schaeffer and Pearcey were part of that.  It went viral and hundreds of mostly left-wing bloggers were all exclaiming about these horrid folks advocating violent take-over of the government. NPR then interviews Mr. Lizza, the author of the piece and he dug himself deeper, suggesting that it is unacceptable for people of religious convictions to allow their faith to shape their public lives.  Keep it in the church, folks. (You can read it yourself; I’ve got the link at the column.)   Misquotes and distortions abounded about Schaeffer and Pearcey, again.  I swam into it a bit, offering comments there and there. It wasn’t pretty.  Joe Carter at First Things called ’em out and it is tart and right. You’ve got to read his two piece, so I give ya the links.

As I say in the column, I’m not interested in Michelle Bachmann much, but, as I also explain in the column, I am interested in Francis Schaeffer and in honest journalism and how evangelical faith is seen in the public square.  I took all this pretty personally this week, and the on-line discussions didn’t go all that well.  It has been wearying, and I thought of books I wanted to mention, from books about the religious tone-deafness of much of the media— a brilliant book, actually, Blind Spot: When Journalists Don’t Get Religion edited by Roberta Green-Ahmanson, Paul Marshall and Lela Gilbert (published by Oxford University Press) to one of the most important books of the year, American Grace: How Religion Divides and Unites Us by Robert Putnam (Simon & Schuster), the famous sociologist who wrote Bowling Alone; from David Koyzis’s brilliant and essential-for-understanding political ideals, Political Visions and Illusions ** (IVP) to Bill Kauffman’s spectacularly interesting road-trip throughout America, telling of movements that want to secede from the Union, or at least break up their states a bit (like in New York.)  That heckuva great read is called, cleverly, Bye Bye Miss American Empire (Chelsea Green Press) and will do two things for you, at least (besides inform you about a whole bunch of history you most likely didn’t know.)  It will introduce you to some of your odder neighbors, which is always a good thing.  And will help you realize that folks who seem a little off the beaten path are not necessarily scary and ought not be demonized, like the Lizza NPR piece on the “exotic” influences of the likes of Francis Schaeffer.  You want exotic?  Kauffman knows exotic.  And he is pretty sane.  He’s about caring for your community, staying put, being local, sort of a wise-cracking Wendell Berry.

**I just saw a blog that wrote as if it was some nuclear disaster and some stunning revelation, that Ms Bachmann, because of Schaeffer and Pearcey,  doesn’t “believe in the Enlightenment.”  Well, how about that?  And those guys aren’t even close to being post-modernists.  That faith in science, brutality of the French Revolution, smashing the church stuff didn’t work out so well after all.  If the writer knew even a little of the roots of Western culture, like the ideas that Koyzis so insightfully explains, they wouldn’t embarrass themselves with such pointless alarm.

I end up mentioning a bunch of books I swear you won’t find on one single page anywhere else on the whole world-wide-web.  Or in any bookstore in America, I’d bet. 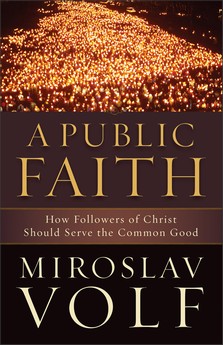 Sure, I explain plenty about Schaeffer and Pearcey but I also highlight titles that will help us navigate these culture wars waters in the months to come, and I’m not just trying to be clever, pushing Kauffman and the weird new thesis of D. G. Hart on why evangelical conservatives are really not conservatives.  This is urgent, important stuff.   We really need books like the new Miroslov Volf , A Public Faith published by Brazos, and books like A Purple State of Mind by Craig Detweiler (Harvest House.)  I suppose it will come as no surprise that I again recommend Os Guinness’ rumination on the first amendment in his splendid and nicely written Call to Civility: And Why Our Future Depends on It (HarperOne) a book that I think is really helpful as we talk about faith, the separation of church and state and all that.  For the journalists who don’t know what their talking about I list a very helpful survey edited by Hall of how Calvinism influenced Western culture; that’s a great book, too.  And I celebrate a really interesting new memoir about a child raised in the rigors of an activist religious right family.  It’s called Raised Right by Alisa Harris and will be released in a few weeks.  It is amazing and very enjoyable.

Please do visit the monthly column.  Sorry it is a bit long.  Thanks for allowing me to share my discouragement, tell the tale of the internet debates this week, and offer our suggestions for ways to be more aware and more fair.  I hope you enjoy reading it. Send an order or two our way if you can.

Just click here to read. After the essay and the book list, there is the easy to use order form link.