After driving all day, and, again, late into the night, returning from a fabulous opportunity to sell books at the national Christian Legal Society Conference in Chicago, we are bleary-eyed and disheveled, to say the least.  We’ve begun the daunting task of unpacking the rented truck. There are literally hundreds of boxes of books and all manner of random supplies–lamps and shelves, duct tape and invoices, left-over junk food and CLS paperwork–scattered everywhere.

While we were gone my monthly column at Comment went live so I thought I’d just copy and paste it here for you.  I’ve mentioned these titles before, but these were freshly written so you might enjoy seeing them. You really should read Comment, published by the stunningly insightful Canadian think-tank, Cardus.  They truly are from the deep-end of the gene pool and I’m so delighted to get the chance to suggest books to their reformational readership.

They call my column “Life-Long Learners” which is a nice touch, I think.  Enjoy.  I’m going to bed.

Comment remains one of my favourite journals, publishing
thoughtful pieces on a wide variety of subjects, often asking how best
to think as Christians and what practices emerge from our reflections
about God’s redemptive work in the world. Readers care about a lot of
stuff, and want to learn how to live in these times fruitfully and
faithfully.

Of course, as a bookseller, it is a joy to talk about books that
might be of interest to this exact sort of engaged, open-minded, and
discerning reader. Here are a few choice titles that Comment readers might enjoy. 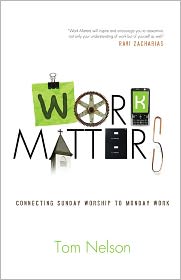 At our bookstore we have dozens of books about the relationship of
faith and work. It has long been a passion of mine to read about this
topic since I was introduced to it in the 1970s by the Christian Labour Association of Canada.
Happily, in the decades since, many Christians of various stripes have
seen the marketplace as a mission field, have learned to think
faithfully about the meaning of work, and have written well about
“loving God on Monday” or nurturing “your soul at work” because “your
work matters to God.”

There are many good books offering a Christian perspective on this
topic, but none as good as the brand new, visionary, and very
well-written paperback by this Kansas pastor. Some who know Reverend
Nelson know that he has emphasized the callings and careers of his flock
for years (indeed, in a long and beautiful blurb in the book, Comment
writer Steve Garber suggests that too few pastors have attempted to do
this and done so well as Nelson.) When the footnotes include fascinating
citations from Paul Marshall and Gideon Strauss and Dorothy Sayers, you
know it will be an interesting read. Nelson balances broad,
perspectival views with quite practical suggestions; he is a solid
theological thinker and obviously a pastor who cares to serve his people
well as they relate Sunday to Monday, worship to work. There are
several very interesting two-page sidebars that allow professionals from
his church (such as Comment writer and architect David Greusel, for instance) to share their stories, giving this, again, a practical and real-world feel.

Work Matters is not lofty or abstract and is ideal for workers
of all sorts. And for pastors and theologians, too, who need to
incorporate this approach to Christian living into their own work. Thank
God for Nelson’s church and their message of “common grace for the
common good,” even in the work-a-day world. 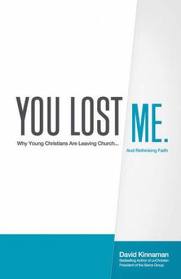 You Lost Me: Why Young Christians Are Leaving Church . . . And Rethinking Faith by David Kinnaman (Baker, 2011)

Kinnaman was catapulted to fame when he produced for the Barna Group the research that became the bestselling book UnChristian
which explores what unchurched North American young adults thought
about Christianity and church life. Kinnaman continued his research,
this time documenting the views and attitudes and stories of younger
adults who were, in fact, raised within Christian churches, but who have
chosen to leave. Why is this? Kinnaman uses the punchy phrase (used by
more than one of his millennial interviewees) “you lost me” to indicate
that these folks were once open to faith, perhaps deeply involved in
Christian practices and life, and at some point determined that they
were no longer on the same page as their adult congregational leaders.
Kinnaman is passionate that we must understand the demographics of this
cohort and we must “start a conversation” about this crisis of
generational loss and, more importantly, with this cohort themselves.
Why are younger Christians disengaging from church? Why are they
rethinking the way theology and spirituality is construed? One nice
appendix to this important book is a listing of 50 suggestions for
“passing on a flourishing, deep-rooted faith,” from 50 different authors
and leaders, many of whom are writers for Comment (including
Steve Garber, Gabe Lyons, Charlie Peacock, Kara Powell, Donna Freitas,
Derek Melleby, David Greusel, Kenda Creasy Dean).

(Editor’s note: Comment will run a feature-length review of the above two books, together, in late December.) 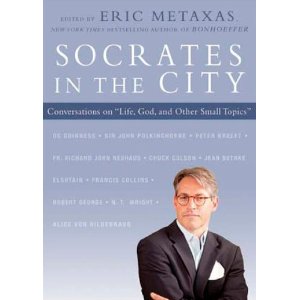 Socrates in the City: Conversations on “Life, God, and Other Small Topics” by Eric Metaxas, editor (Dutton, 2011)

For years now, Veggie-Tale smart-aleck and truly smart evangelical author Eric Metaxas (Wilberforce, Bonhoeffer)
has been inviting some of the world’s leading Christian thinkers to a
lecture series and friendly conversation program in the heart of
mid-town Manhattan. Inviting others to seek the wisdom of Socrates in
the city of man, Metaxas has held forth with remarkable guests, creating
space for good dialogues and consequently doing important ministry of
intellectual depth and wise apologetics.

A book loaded with some of these lectures was just released and it is
a stunning collection. There are essays that were first given at his
Socrates series by Sir John Polkinghorne, Jean Bethke Elshtain, Alister
McGrath, N.T. Wright, Francis Collins, Os Guinness, Peter Kreeft, and
more. From the call for pluralism and civility by Os Guinness, to a
great piece on Bonhoeffer by Metaxas himself, to Elshtain on the meaning
of the human (drawing on C. S. Lewis), to several good speeches on the
relationship of faith and science, this book is a treasure-chest. I can
hardly think of any other single-volume anthology with such weighty,
clear-headed pieces. Charles Colson shines in a piece about “the good
life,” McGrath respectfully critiques the new atheists, while the late
Fr. Richard Neuhaus asks if “atheists can be good citizens.” New York
psychiatrist Paul Vitz movingly writes of the importance of fathers.
Catholic philosopher and creative writing star Peter Kreeft reminds us
of the joyous value of asking good questions, a perfect piece inspired
by the Socratic tradition which summarizes much of what Metaxas surely
intended for this project.

“Small topics?” These are anything but, and the editor’s impish good
humor is evident not only in the grand introductory chapter but in that
small phrase in the sub-title. Get this book and find some inquisitive
friends. Such “small topics” demand good conversations. 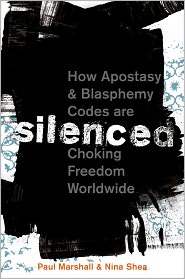 In a longer review at our BookNotes column,
I wondered out loud if Marshall and Shea might themselves be in danger
in writing a serious book exposing those who would issue deadly fatwas
against writers, repress those with the wrong religion, or imprison
people who don’t tow a certain Islamic party line. This book is
shocking, even with the tone of a scholarly tome, as it painstakingly
documents, region by region, country by country, the efforts to pass
blasphemy laws, forbid religious conversion away from Islam, or enforce
Sharia law. There are chilling stories of beheadings and murders–some
official and others committed by vigilantes. (Think of the
still-endangered Salmon Rushdie, for instance, or the brutal ritual
murder of Theo Van Gogh, or the horrors promoted by jihadi forces now
commonplace in many Central African nations.)

Ever hopeful, however, the authors offer positive examples of both
international legal efforts to ensure religious freedom and of
pro-democratic moderate Muslims who dare to oppose their radical
co-religionists. Dr. Marshall, as you may know, has a vision of
religious affairs and human rights rooted in a profoundly Reformed
worldview (he replaced the legendary Bernard Zylstra at Toronto’s ICS
and helped mentor the brilliant Jonathan Chaplin who took his chair when
Marshall took up a position doing international human rights research.)
His realization of the profound role of religion as a foundation for
views of human rights and freedoms put him early on a path to expose
religious persecution and to attend to ways in which Islamic faith does
or doesn’t comport with notions of public justice. As a Western,
Christian pioneer in this work, he has Muslim friends literally all over
the world–there can be no accusation that he is Islamophobic.

Included in Silenced are three quite significant new essays by
internationally known Muslim scholars insisting that there is nothing
within Islam that demands Sharia or blasphemy legislation. An extended
forward to the book was written by the late President of Indonesia (the
world’s largest Muslim nation) who was a friend and advocate for
Marshall’s work on human rights. A large book, it is a serious and
monumental contribution to our knowledge of one of the great threats of
our era. Pray that it is read, discussed, considered, and heeded–and
that those who dare discuss it are kept safe from those who see violence
as a divinely approved method of silencing opposition.