Okay, I know.  Not all of us are sports fans.  But you know people who are, and wouldn’t they love a cool book about their national pastime?  Doesn’t God care about sports? According to my facebook feed, God cares about sports quite a lot. At least God’s friends do.

So here ya go.  A quickie, fun, just-the-best books about baseball list, on sale, while supplies last, good until the end of the month. (We show the regular retail price, and will deduct the 25% off for you.) No Halloweeny stuff, here.  It’s World Series time!  Nine innings?  Here’s nine books.
R

ivals! The Ten Greatest American Sports Rivalries of the 20th Century  Richard O. Davies (Wiley-Blackwell) $24.95 The cover has a scrappy picture of two baseball players fighting, and that speaks volumes of this fun and feisty book.  The Red Sox and the Yankees? The Tar Heels and the Blue Devils?  Arnie and Jack, Ali and Frazier.  This is deeply researched and entertaining, and, as one reviewer puts it “an insightful look at the cultural and athletic underpinnings of ten entrenched American sports rivalries.”  Admittedly not just about baseball, this helps us understand the history and nature of organized sports, a bit about the ethics of competition, and certainly the details of these contentious rivalries. Great for any fan!
T

he Juju Rules: Or, How to Win Ballgames from Your Couch: A Memoir of a Fan Obsessed  Hart Seely $13.95  This guy is a beloved sports humorist, having written for everything from National Lampoon to the New Yorker.  He’s the editor of O Holy Cow! The Selected Verse of Phil Rizzuto, so there’s that.  But more importantly, he is a huge baseball fanatic.  Tony La Russa says “Clearly Hart comes to the classic fanatic level, and this chronicle of his life as a devoted fan is entertaining — and universal.” Well, I don’t know about the universal part, but it is hilarious — him yelling at the TV, pacing the floor, “harnessing the juju energy to  influence the outcome of games.  And it works!”  You know the Robert DiNiro character in The Silver Linings Playbook?  He mighta read this. The Philadelphia Daily News calls it “the wittiest baseball book since Ball Four.”
T

o Stir a Movement: Life, Justice, and Major League Baseball  Jeremy Affeldt (Beacon Hill) $21.99 I promoted this a bit this summer and shared how thrilled I was to read the memoir and Christian testimony of a major league pitcher who is honest, down to Earth, truly interesting and who is leveraging his fame and fortune for social justice.  Everybody knows about the scourge of modern slavery, but few of us really do anything 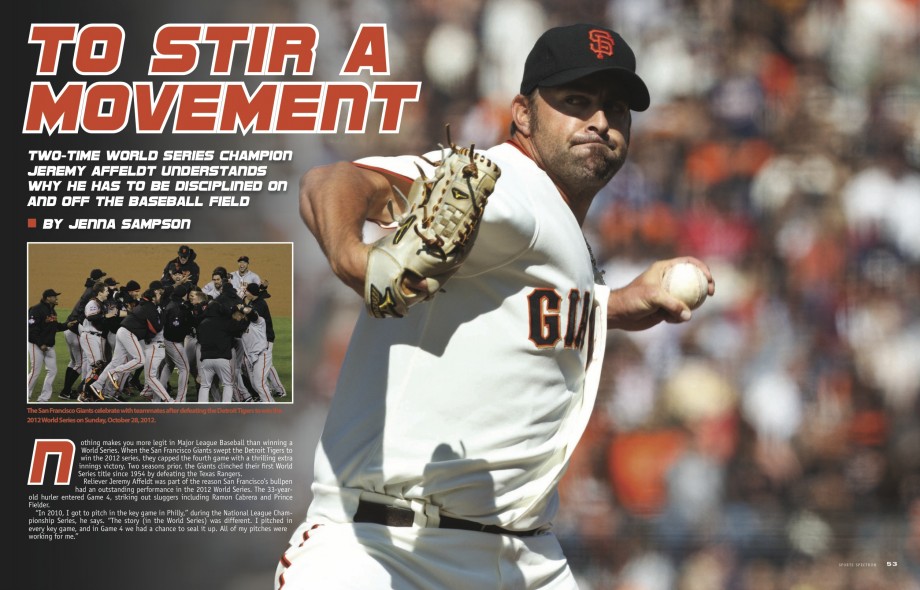 Jeremy  Affeldt is using his voice to demolish the barriers that stand between people, and invites us all to make a difference.  Not to mention that he’s been in two World Series and is one of the best left-handed relievers ever to play the game.  I’ve not read a sports bio that is quite like this.  Way to go, JA. 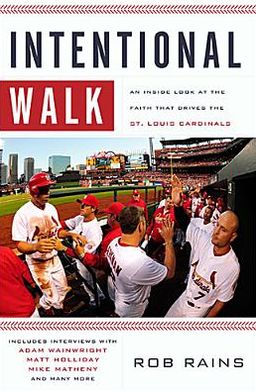 tentional Walk: An Inside Look at the Faith That Drives the St. Louis Cardinals  Rob Rains (Nelson) $15.99  As it says on the back cover “baseball is for a season, but faith is for a lifetime.”  Some of these good guys are outspoken about the Lordship of Christ, others carry a quiet faith, and these interviews are sure to interest anyone curious about it all. What a season this team had in 2012, when reports of the players integrity became an important part of their backstory.

And what a season they’ve had this year!  Included are interviews with, or testimonies of, manager Mike Matheny, third baseman David Freese, pitchers Adam Wainwright, Jason Motte and Trevor Rosenthal, and a whole host of others — including support staff, even a renowned broadcaster. Plus, it’s a cool title for a book about discipleship among ballplayers. 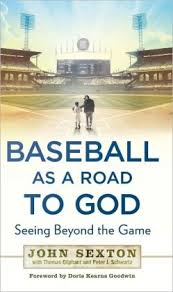 aseball as a Road to God: Seeing Beyond the Game  John Sexton with Thomas Oliphant and Peter Schwartz (Gotham) $27.50  This is a deep and thoughtful book, based on and telling about the wildly popular “Baseball as a Road to God” seminar that the author (President of New York University) has lead both at the university, and elsewhere, for years.  Few people know the sport, its legends and villains “its near irresistible appeal, its breathtaking  moments of drama” as well as Sexton and his associates.  He also is interested in religious perception, spirituality and faith. Bill Moyers says, “In the church of baseball, John Sexton is one of the preeminent theologians.”  Not too many scholars of the sport also know Aquinas, Tillich and Tolkien, but this guy does. Mature, illuminating, delightful. 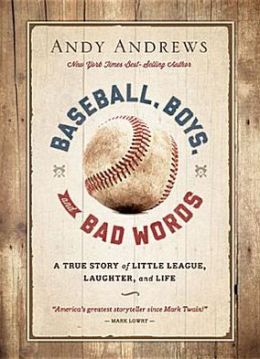 aseball, Boys, and Bad Words: A True Story of Little League, Laughter, and Life  Andy Andrews (Nelson) $12.99 This is a small-sized, full-color, gift-book type title where beloved storyteller Andrews narrates his 11th summer, in 1970, with a group of friends who began a Little League season they would never forget. In a funny tale that carries the smell of well-worn gloves, freshly cut grass and brand new uniforms, you’ll learn about their season with a new coach.  And that’s where it gets interesting. Nice pictures, graphics, quotes, too. Very sweet. 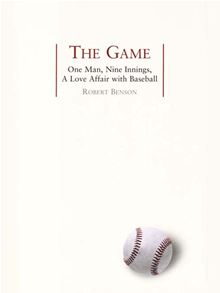 he Game: One Man, Nine Innings, A Love Affair With Baseball Robert Benson (Tarcher) $12.99  I love this writer, admire him and trust him, and read almost anything he does — from gardening to fixed hour prayer to what we can learn from the Benedictines about being in community.  He’s a measured, caring writer, and you may recall I not long ago raved about his very moving book about his aged mother, Moving Miss Peggy.  Anyway, this is one that is always worth mentioning when one is search for classy, caring prose about this slow, beautiful sport. Everybody rightly mentions George Will and his amazing book on baseball,
but this one is similarly thoughtful, and fun, too. 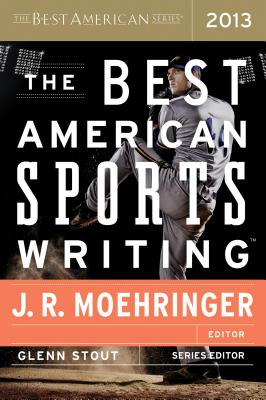 he Best American Sports Writing – 2013  edited by J. R. Moehringer  (Mariner) $14.95  Okay, it isn’t  just about baseball, but we carry most of this great annual series — from the best comics to the best essays to the best infographics to the best short stories. A lovely gift for anyone who loves good writing or who wants to get up to speed on a topic or genre.  Here you have some stunning writers, ruminating on some amazing athletes and waxing wonderful on some remarkable aspects of our fascination with games.  Those who follow this sort of journalism will know some of the writers, and some are truly wonderful wordsmiths. Enjoy!
R 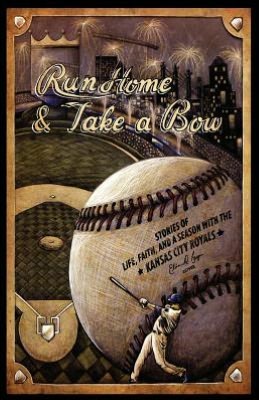 un Home and Take a Bow: Stories of Life, Faith, and a Season with the Kansas City Royals  Ethan Bryan (Samzidat Creative) $14.99  Okay, I’ll admit it.  I put together this list mostly so I can tell you once again about my good friend Ethan’s good, good book. I really do admire it, and I admire him, and this is a perfect book to read now as the leaves are changing and the season is over.  Yeah, it is about the Royals.  But also his kids.  And his faith community.  And his calling. And his parents.  And it mentions me.  And it shares a lot of lovely lessons about life. And it is well written. And it has a fantastic, hand-drawn cover. So there; it is true — this is a great little indie sleeper that ought to be better known. There is even more to be found in this sequence of chapters, and it truly deserves an extended review.  You can read what I wrote about it here, and then order a few. If you know anybody with a soft spot in their heart for a losing team, or for their deep love for the game that they once played, this book is awesome.  It really is a world series winner.
BookNotes
SPECIAL
DISCOUNT
ANY ITEM MENTIONED

25% off
while supplies last
until October 31, 2013
after that, all items 20% off
order here
takes you to the secure Hearts & Minds order form page
just tell us what you want