I thought my BookNotes review last week of Jeremy Courtney’s book, Preemptive Love, just out in paperback, ended up pretty good, so I do hope you read it.  It’s really a spectacular book, page-turning, informative and inspiring.

And, we are hosting an event with Jeremy here in the area this Friday night.

Here is an early (longer) draft of an op-ed column I sent to our local newspaper, which they chose not to run.  Somedays I rub my eyes at the silly stuff that gets in the paper, but I suppose I’m biased here.

Hosting Jeremy is a great, great privilege and the event is going to be awesome, fun, even, amidst the horrific news of what is going on in Iraq these very days.  We are grateful that our church has partnered with us to bring this event to Central Pennsylvania.

Here’s how I tell tried to tell local folks about it.

In recent weeks the story of the terror waged in Iraq by the
army known as ISSI has exploded across the news and social media.  We have learned of religious hatred and
political crisis.  Some of us
despair of the reports of genocide while others rant against the political
party that we think has been most irresponsible.  The situation is tragic. There is very little good news
coming from the Middle East these days. 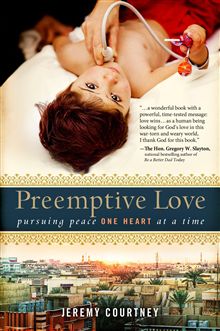 entral Pennsylvanians will have an opportunity to hear an
aid worker just in from Iraq, the founder of a medical NGO there, Jeremy
Courtney, who may be one of the most fascinating people I have ever met. Hearts & Minds Bookstore in
Dallastown named Courtney’s book, Preemptive Love: Pursuing Peace One Heart at
a Time, about his work with sick children in Iraq, one of the Best
Books of 2013. The first Friday of
September (9/5/14) we will be the first bookstore to officially launch the new paperback
edition of Preemptive Love with a guest appearance by the author himself.

The historic sanctuary of First Presbyterian Church in
downtown York is a perfect venue to host Mr. Courtney and his family, whose work in Iraq invites
racial and ethnic reconciliation by way of collaborating in the dramatic effort
to do much-needed pediatric heart surgeries. A binding 1967 document of the
Presbyterian Church (USA), called a “confession,” insists that peacemaking is part of the high calling
of followers of Christ, and First Presbyterian has long attempted to serve as
agents of reconciliation. In the tense days of race riots in York, First
Presbyterian merged with Faith Presbyterian, bringing together as a signpost of
inter-racial unity a primarily black church and a primarily white one. In the hot heat of the 1980s Cold War,
FPC hosted meetings of the nuclear freeze campaign, insisting 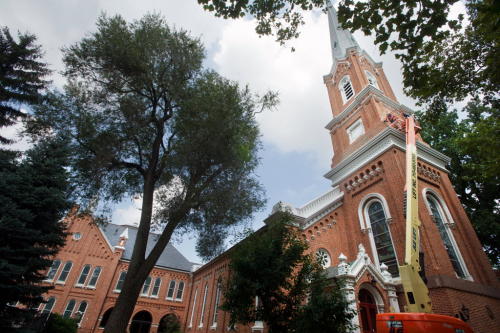 that treaties for
bi-lateral disarmament were necessary and in keeping with a faithful politics. We hosted Russian clerics in a time when
that was not popular (indeed, an international religious service was picketed
by out-of-town hawks.) Drawing on our Confession of 1967, we use the word “reconciliation” a lot.

Like most
churches, the congregation has developed partnerships with ministries in other
lands, even sent our own health care teams overseas. We’ve hosted classes on peacemaking, understanding Islam, explored racial
concerns, and have taken other initiatives to explore how the gospel leads to
wise and fruitful relationship-building for the common good.

Ahh, but none of us have done the sort of audacious ministry
as has Mr. Courtney, whose work has earned him an Islamic fatwa, or death threat, and has landed him in foreign jails.

By helping Arab kids get life-saving heart surgery in Israel,
where they met, perhaps for the

first time, real Jews, who showed themselves to
be kind and good. As Mr. Courtney
explains in his book, Preemptive Love: Pursing Peace One Heart at a Time, these medical miracles did just what the religious
extremists who opposed them feared: kids and their families learned to love
their enemies!  The standard-fare
demonization of enemies can’t stand when it is undermined by preemptive love.

Courtney’s PLC organization experienced further obstacles and agony in helping save
lives of countless children in the Kurdish region of Iraq when it became clear
that the only hospital in the region able to serve them was in Turkey
(interestingly, a Johns Hopkins affiliate.) Those who know the anguish of the people of Kurdistan know
that the Turks have committed their own genocide against them and have repressed
them for centuries. Can love win
in the effort to overcome such long-standing mistrust and animosity? Can a legacy of violence and abuse be
overturned?

Courtney thinks that
the power of love can do what our bombs cannot: by building trust, families and
village can be transformed. 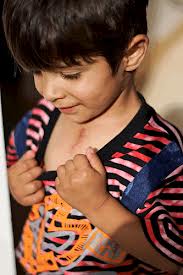 Of the children his Preemptive Love Coalition has served and
whose lives were saved by multi-ethnic, inter-faith cooperation, he says “they will
carry the scars on their chests into law school and parliament and tell a new
story of a new Iraq…”

Perhaps we, too, can play a part, telling a new story, even here.

Medical missions are always complicated in the developing
world when infrastructure is problematic, funds lacking, and procedures
untried. When the needs include pediatric heart surgery, in a war zone, amongst
people groups who are hostile to Western ideals, the mission is extraordinarily
fraught.  And yet, this young Texan
continues to believe that love can overcome the worst of odds. He has been betrayed and threatened,
and yet, his Preemptive Love Coalition is finding success.  As he quickly says, he and his wife and
teammates have been shown hospitality and grace by new Iraqi friends and global
colleagues. Together, they are
learning to do the heart-mending operations in Iraq, building local capacities
and infrastructure. The backlog of kids needing heart surgery is immense (Iraq
has one of the highest amounts of childhood heart defects in the world, apparently thanks
to the enhanced radiation warheads used in the first Gulf War and the horrific gassing
of the Kurds by the brutal “Chemical Allie” serving the dictator Saddam
Hussein.)  And they are doing
something about it, in trainings they call The Remedy.

The war, the embargo, the limited worldviews, the radiation
and the poison gas have all conspired to create one of the most urgent health
crises in the world. Jeremy
Courtney has become a hero in the efforts helping to end the backlog of kids
awaiting life-saving surgery.
While some still threaten him and his team, many more are joining the
Coalition, coming to believe that their motto —  “Love first, ask questions later” — is not only the need in
Iraq, but 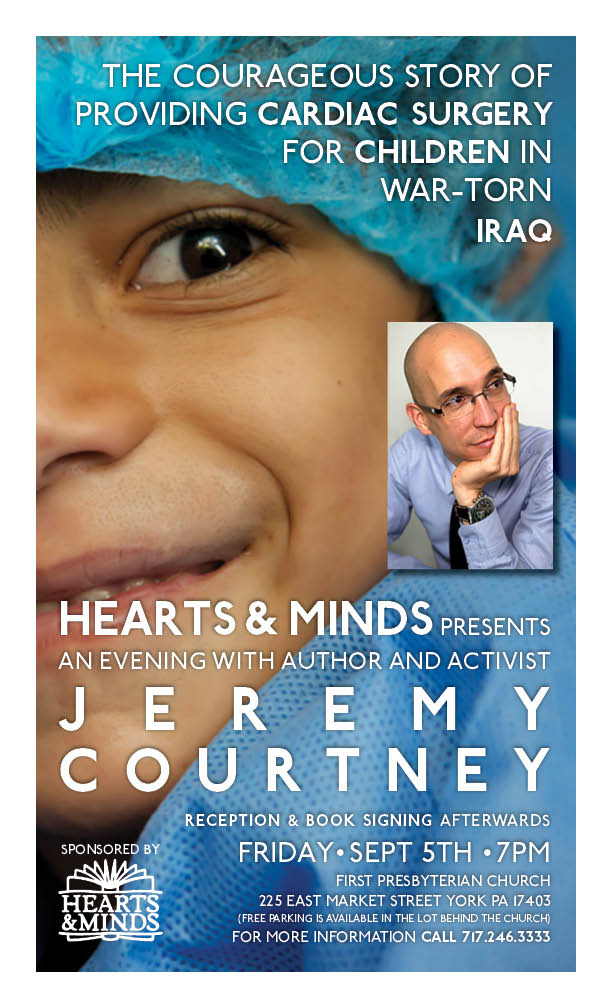 perhaps, a way into a new way of life for us all.

You are invited to hear Mr. Courtney as he talks about his
book Preemptive
Love and his organization, The Preemptive Love Coalition, September 5th
at 7:00 pm at First Presbyterian Church at the corner of Queen & Market in
York.  There will be a reception
afterword, with light (Middle Eastern) refreshments and a time for autographing books. There is free
parking behind the church.

The LA Times said,
“this is the best news to come out of Iraq in a long time.”

We can experience it right here in
Central PA.

WE CAN SHIP AUTOGRAPHED BOOKS 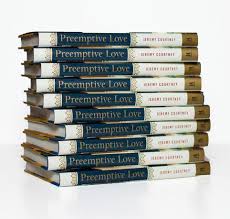 If you want an autographed copy of the book, we may be able to get you one.  Just tell us if you want the hardback or paperback, and to whom you want it inscribed. If we have books left over Friday night, we’ll get one for you, and ship it, happily.   Use the link to the order form, shown below, or give us a call. As they might say in Arabic speaking Iraq:  Shukran Jazeelan