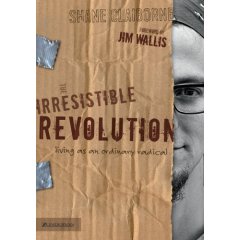 Here is how I start the long review–mostly positive, with a few qualifications–that I did for the monthly column over at the website. I hope you read it all and catch our enthusism for this book.
I have been eager to tell you about a wonderful, fun, challenging, interesting and provocative book written by a young Christian who is getting some publicity these days; it is a guy weÃ•ve come to know a bit, that weÃ•ve heard of for several years, and are very encouraged to know of the release of his new book. Shane Claiborne is a hoot of a guy—radical in his commitment to evangelical social action, delightful in his lack of guile, inspiring in his show of guts and goofiness. I have a few reservations about the book, a pages-long backstory about my own journey (which I will try to tell only briefly) and more enthusiasm about selling this new book than anything that has come along in ages. It is called, if you donÃ•t know, The Irresistible Revolution: Living as an Ordinary Radical and is published by Zondervan ($12.99.) This in itself is a story that is curious since most evangelical publishers wouldnÃ•t risk telling the tale of a young man who lives with the poor, protesting the role of the military and who has been regularly arrested for nonviolent civil disobedience. Martin Luther KingÃ•s famous words to the more cautious status quo Reverends in his “Letter From a Birmingham Jail” are still pretty needed today, since most mainstream folks tell our idealistic social activists to cool down and go more slowly. I am overjoyed that Zondervan took a risk on this guy, and trust that the integrity and wholeness of ShaneÃ•s life, and the Biblical basis for his human rights activism, will become plain. For now, though, the release of this book is a huge thing. This is Zondervan, not Orbis Press! Shane came out of an evangelical Christian college, for crying out loud, not Oberlin or Koinonia Farms! He has spoken at Willow Creek! How did he even hear of the Berrigan BrotherÃ•s at his college? That is itself quite a story. I thought we were the only bookstore in the world that carries Max Lucado and Ammon Hennacy; Chuck Colson and Howard Zinn; Rick Warren and Dorothy Day. But IÃ•m ahead of myself…read more

5 thoughts on “The Irresistible Revolution”