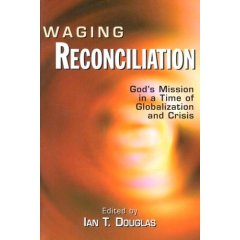 Theological diversity. Globalization. Postmodern insights. Social justice. Ancient liturgy. Ecumenism. Reconciliation. The lingering problems with the privelege of race, class, gender. God’s unfolding process of bringing New Creation. The United Nation’s MDGs (Millenium Development Goals) and what one person can do to help seek justice. Faithful worship.
These were only some of the themes discussed in a three day retreat for Episopalian priests, a gathering where we are invited to participate each year. Episcopal Divinity School prof Dr. Ian T. Douglas was the speaker, and I was very impressed with his integrity, enjoyed his style, and think he brought great gifts and passions to these hard-working clergy. It is not unknown that the Anglican communion is facing complex and painful matters, holding together diverse theological and cultural perspectives.
Rev. Douglas has edited and contributed to several books (and, yep, we were so impressed we want to tell all our blog faithful about them.) One we’ve promoted before is called Waging Reconciliation: God’s Mission in a Time of Globalization and Crisis (Church Publishing; $22.00) which has Anglican leaders from through-out the world offering insight about peacemaking, the unity of the church, the call to enact God’s justice in a broken, broken world. An earlier book studies the diversity of the global Anglican church, and particular works on how to get beyond older missionary stylings that imagined the West as the “real” church and those in the Southern hemisphere to be younger or dependent. Beyond Colonial Anglicanism: The Anglican Communion in the Twenty-First Century (co-edited with Kwok Pui-Lan) is important for any of us trying to make sense of the new era of a truly global faith community. It, too, is publsihed by Church Publishing ($27.00.)
A wonderful resource on working on the MDG’s is called What Can One Person Do? Faith To Heal a Broken World edited by Sabina Alkire & Edmund Newell (Church Publishing; $18.00.) Ian’s good chapter offers an overview of the Biblical story, from creation, fall, covanant, prophets, priests, kings, incarnation, Spirit, new Community, New Creation—my phrases as much as his, I suppose, but you get the Big Picture— is a good piece, reminding us that knowing the Biblical basis for wise action is one of the most urgent tasks for activists. It is just one of a handful of helpful essays; What Can One Person Do? is loaded with discussion questions, practical application suggestions and reflection pieces making this useful for small groups wanting to engage the crisis of global poverty, AIDS, injustice and sustainability.
Something of Ian’s passion for reconciliation is seen in one fascinating book he co-wrote, Understanding the Windsor Report: Two Leaders in the American Church Speak Across the Divide (Church Publishing; $20.00) the study of, among other things, what to do about homosexuality in the church, the Gene Robinson installation, and how to hold together a world-wide church with huge fissures around issues of Biblical authority and such. What is so very interesting is that he co-wrote this study with his friend the Very Reverend Paul Zahl, of Trinity Episcopal School for Ministry, a theologically orthodox Episopal seminary, located in the relatively conservative Diocese of Pittsburgh. That a professor from one of the more liberal theological seminaries in the country is irenic and thoughtful in his discussion with such an evangelical leader is surely a sign not only of new creation breaking out (where else have we seen such vigorous and kindly debate?) but of a (postmodern?) willingness to break out of the typical liberal vs conservative mindsets. Although I was happily quite impressed with Ian (and he said the best things about our work and ministry) I suppose I should say, too, that I tend to be partial to Dr. Zahl’s position.
There is a book that I wish would have sold better at the clergy retreat, a book that, as a non-Episcopalian, still interests me, and surely seems important for my Episopalian friends, The Fate of Communion: The Agony of Anglicanism and the Future of a Global Church by Ephraim Radner & Philip Turner (Eerdmans; $32.00.) With a title like that, it may seem that it is only for those who are part of that denomination. 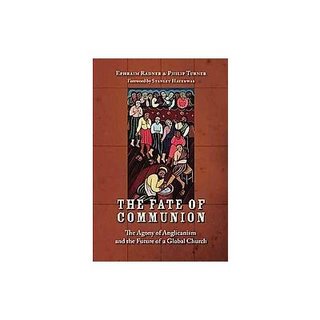 But read the back jacket blurbs, composed by some of the most vital theologians in the world today:

George Lindbeck
Ã‘ Yale University
Ã’This book is both powerful and illuminating, both passionate and scholarly. No better study exists of the pros and cons regarding whether the worldwide Anglican Communion will hold together in the present crisis. Unlike many collaborative works, The Fate of Communion is lucid and readable. As a non-Anglican, I can testify to its importance for all those concerned about the future of communion not only in a global church, as the subtitle carefully states, but also in the church universal.Ã“

Christopher Seitz
Ã‘ University of St. Andrews
Ã’A timely, sober, and intelligent account of AnglicanismÃ•s travails, equally matched by a bold call to holiness of life in communion and in conciliar forbearance in Christ. In the end this is a hopeful book about GodÃ•s vocation for Anglican Christianity, that is, for a communion which finds its calling in obedience, mutual submission, and missionary service. In its trenchant analysis of American culture, The Fate of Communion is much more than a book for Anglicans alone.Ã“

4 thoughts on “Waging Reconciliation with the Anglicans”